Marilynne Robinson on What We’re Losing in President Obama

In Conversation with Christopher Lydon

This interview comes from Open Source, a weekly program about arts, ideas and politics.

What the “Yes I Can” president most wanted to do was bring together a robust democracy in spirit if not every line of substance. What he ran into was a rockslide of revolt and a singular embodiment of it—a three-ring circus of a successor, Donald Trump, chosen, it seems to be the very opposite in tone and temperament of Barack Obama.

Marilynne Robinson—of Idaho originally, then Iowa—is the bestselling storyteller of the heartland, the Pulitzer Prize novelist of Housekeeping, Gilead and Home. With President Obama she chanced into a series of conversations that made unusual reading—not about politics so much as the spirit of the country and the core of the man in the White House. So she was the first person we wanted to ask about what we’re losing in this transition. In a farewell piece in The Nation magazine she made no bones about saying: President Obama has been the very best of us.

Marilynne Robinson: He’s an amazing man. He has a kind of deep residual joy that I think is his great strength. He not only recovers, he recovers the ability to be generous and the ability to be gracious. I think he really is a saintly man. I don’t think that’s an overstatement at all.

Christopher Lydon: Your thread in the farewell in The Nation was that he was the best of us. He was the embodiment of the American idea, literally and spiritually, a model really of that more perfect union he kept speaking about to you as his ideal.

CL: A man who had Kenyan-Kansan origins, who lived as a stranger in Indonesia, who had family living today in Kenya, the very embodiment of the transnational idea.

MR: I don’t know why this country where people pride themselves really on having traveled, having broadening experiences that we’re able to have—this is true of a great many Americans—and yet, somehow, the fact that someone spent part of his childhood in a foreign country and he was treated like something threatening and alienating, how do we do that to ourselves? It’s embarrassing, you know? Our refusal to acknowledge him as he was really is a refusal to acknowledge ourselves as we are. Including a country that looks very deeply into the world is very inseparable from the world at large.

CL: That was my understanding of him, certainly coming in. It seemed to me the most exciting thing about this country of immigrants, this nations of immigrant—and I’m one of them, family of—was this same excitement about him, as wonderfully multiple, it seemed to me, in 2008 as the crew of Melville’s Pequod: a nation before we had a government.

MR: Right. When you watch what’s going on now and you have a president who really has gone to Russia a number of times, to try and shake loose some rubles and so on… that was not to be as alarmed about as the fact that Obama spent some time in a foreign school. That’s just ridiculous. The country should blush collectively for having been distracted by these issues that are not issues.

CL: Marilynne, you celebrate this man, and I think every word of it resonates: incredibly alert, attentive, listening ahead of your next sentence, engaged, extraordinarily bright. What’s coming to be in retrospect is there’s a gap between the man, that man, and his movement, and it’s a big puzzle. The movement almost became bigger than him, and then, suddenly, he seemed to leave it outside the door at the White House. That’s a puzzlement to me: the loner.

MR: I’ve watched a lot of elections at this point, and I remember Barack Obama when he was running for office saying, “We will be able to do this and this and this because I have a movement behind me.” You know, talking to the audience. Cheers, cheers. A liberal politician never has a movement behind him. It is simply true, historically, that their attention and their devotion can be deflected instantly. I think that the hopes that Obama had were realistic intrinsically and very much of possible of realization, but people, they go running off after crazy things. You know, the newspapers every day talking about his birth certificate, this kind of stuff.

MR: This distractibility of the people who ought to have been his supporters was what was really his weakness. I think that was a great, hard lesson for him to absorb. This idea of the transformative leader, I think that Obama is smarter than that. He knows that change is incremental and that it is collective. What liberals tend to do—and I call myself a liberal under every possible circumstance. I’d put it on my headstone—but what they tend to do is create some ideal that nobody could live up to and then diminish what is good, what is accomplished by comparison with this almost childlike, supposed expectation. It’s no way to run anything.

CL: Historian Eric Foner said that President Obama didn’t listen hard or learn much from his critics. I want to know what he learned from his friends, like you Marilynne.

MR: I think, from me, he learned how much he loved what he actually loved before. [laughs] I think that he has an idea of America that… it’s inclusive in the sense that it goes all the way from anyone’s ordinary life to the highest articulated values of the Constitution and the Declaration. He loves the country as a phenomenon, and he is able to absorb all kinds of things that, frankly, would drive me crazy.

CL: So many things. I’d love you to rhapsodize on the pleasure of his company, what it’s like to be with him. What’s going on there on that brilliant surface and hidden too.

MR: I don’t think he actually has much surface. It is a kind of remarkable thing to have a president just sort of drops into your life like that, you know? Suddenly, here comes the airplane, and here comes the microphone. You know, it’s really not something that you expect. But I have talked with him before, and, on the basis of that, I felt a very deep affinity with him not because of any obvious likeness but because he’s very readable. He anticipates when a courtesy might be required. He’s ahead of you in that way, you know, but always is very attentive, generous in a kind of accurately imaginative sort of way. I’ve never met anybody like that. He’s just extraordinary.

CL: You wrote that Obama is ours in the deep sense that Lincoln is ours, a proof, a test and an instruction. We see ourselves in him, and in him we embrace or reject what we are. Expand on that.

MR: One of the things that I think is remarkable when you think about American history is how much it’s a thing of language, you know, how much the great moments and great turning points, really, in history are associated with a great speech. The best presidents are highly articulate men. You know there’s an America that sort of transcends America, and it’s carried around on this special poetry of collective understanding. There’s a verse in a psalm that says that “the Lord is enthroned on the songs of Israel,” and I think there’s a certain way in which America is enthroned on these highest speeches that are sort of an aesthetic realization of an idea that gives it twice the power of the idea, or ten times. Obama speaks that language. He’s in that tradition, in that heritage. The day that we stop recognizing it when we hear it, when the old music actually becomes inaudible to us, that will probably be the place where America in every sense that it likes to think of itself will, in fact, expire.

CL: What lines would you remember, for example, out of his best speeches, and then, what will make him there forever?

MR: Well, [laughs] you know, I’ll probably never forget his “amazing grace” speech. I laugh because he mentioned my name in it, which startled me to death.

CL: No wonder you’re laughing. I love it when you laugh.

MR: Well, I mean, it was a very solemn and moving address, but he was speaking in that very specific circumstance of a hideous event, one that had the sulfur of our darkest moments clinging to it. He’s a very pious man. I don’t have any doubt that he’s a deeply religious man. He has a theological vision; he resolves things into a larger frame of meaning than people ordinarily do. It’s really a very beautiful way to think of things, and it’s theological by my lights in the sense that it steps completely outside ordinary categories of success or significance. The nobility of everyone doing what is required, it’s just very strong to him. 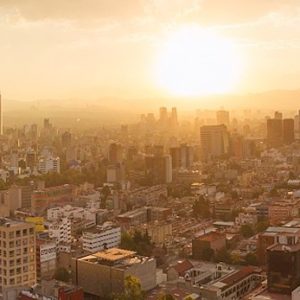 Mexico City has tremendous bookstores, places that most tourists miss. With Mexican Nobel Prize winners like Octavio Paz and longtime...
© LitHub
Back to top