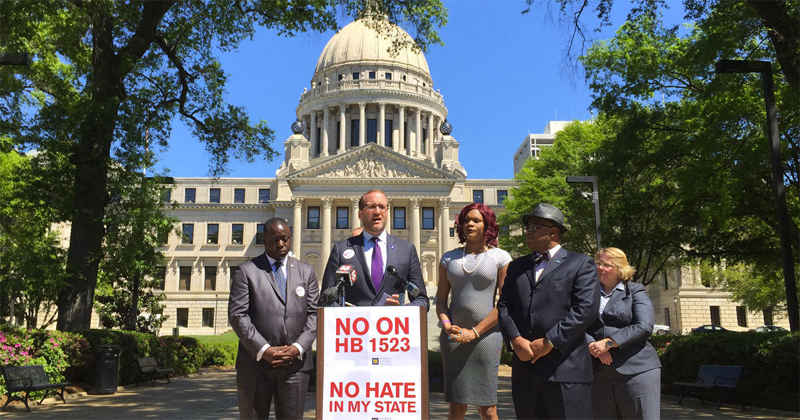 "An act of cruelty and economic stupidity"

Last week, Mississippi governor Phil Bryant signed into law HB 1523, a particularly nasty piece of legislation that, under the thin guise of preventing discrimination, effectively institutionalizes it. The “Protecting Freedom of Conscience from Government Discrimination Act,” as the law is disingenuously named, ensures that the government will not interfere with any person who refuses services based on “deeply held religious beliefs.”

But this is not a broad dictum that protects religious freedom. The Mississippi legislature only protects three beliefs: that marriage is only between a man and a woman; that sex is “properly reserved for such a marriage;” and that gender is “objectively determined by anatomy and genetics at birth.” When the law goes into effect in July, it will more or less declare open season on discrimination against the LGBTQ+ community from landlords, insurance providers, government officials, and basically anyone else.

HB 1523 is an act of cruelty and economic stupidity, and it should and will be repealed. Many Mississippians have come out against the law, including business leaders, activists, and the Jackson City Council. Hotels, bookstores, restaurants, and clothing boutiques have begun putting signs in the windows indicating that they welcome everyone, no matter what the house bill says. And yesterday, 95 Mississippi writers, spearheaded by the novelist Katy Simpson Smith, signed an open letter against the bill, noting, “It is deeply disturbing to so many of us to see the rhetoric of hate, thinly veiled, once more poison our political discourse.” The signees included John Grisham, Donna Tartt, Kathryn Stockett, Catherine Lacey, and Kiese Laymon. And me.

Signing an open letter isn’t much, in the way of political action. But I was proud to do it, not just because I stand alongside a list of other writers whose work I deeply admire, but also because Mississippi is full of people I love, and HB 1523 is an insult to all of them, no matter their religious beliefs or gender or sexual orientation. By not working to create a hospitable, tolerant environment for all people, Mississippi is losing out on the talents, skills, business acumen, and perspectives of an enormous swath of the population, and that is a deprivation every citizen of the state will feel.

I worry, of course, about the legal and moral ramifications of such a law. I picture the injustice of a gay couple being denied a lease, a gender nonconforming person losing their employment for the perceived affront of being themselves. I fret about my queer Southern friends being turned down for insurance, a driver’s license, or just a breakfast pastry. It is heartbreaking to contemplate.

But selfishly, I also worry what that will mean for the cultural and literary fabric of the state. When I was researching my book on southern writers, South Toward Home, I was struck, again and again, by how little remained in Mississippi to celebrate writers of color. Richard Wright, one of the greatest American writers of the 20th century, was a native Mississippian, but the state’s belated, seemingly reluctant embrace of his work means that there is little in the way of monuments or museum offerings for Wright. There is a palpable absence, among the busts of William Faulkner and Eudora Welty, of the writers of color whose work is equally worthy of celebration. Wright, though he faced enormous obstacles and hardships, managed to make his voice heard, largely by escaping his home state’s discriminatory laws.

As I researched Wright, I kept wondering about all the other writers who were silenced, about how many stories were lost. I couldn’t help but feel that all of us—as readers, as writers, and just as citizens of a world largely shaped by words—were poorer for the loss. If HB1523 is allowed to go into effect, how many more voices will be muffled? How many more stories will we lose? How many perspectives and worldviews and big ideas?

For a state that has so long grappled with the destructive consequences of institutionalized racial discrimination, to pass a measure like HB 1523 seems to proclaim: “We have learned nothing, we are stuck.” But I think—I know— that’s not true. Mississippi is better than that. We can, and we will, do better than HB 1523. 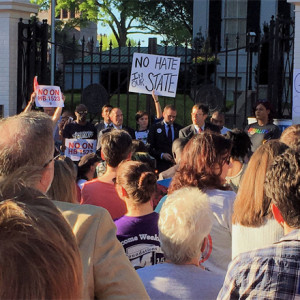 At 9 pm last Thursday night, I got an email from the Jackson-based Crossroads Film Society denouncing Mississippi’s recent...
© LitHub
Back to top