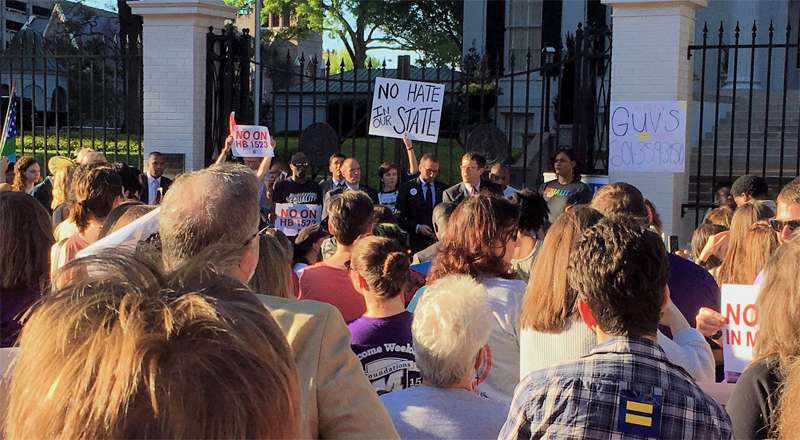 “Maybe you should write a statement"

At 9 pm last Thursday night, I got an email from the Jackson-based Crossroads Film Society denouncing Mississippi’s recent House Bill 1523, which uses the concept of religious freedom as a cloak behind which to practice bald discrimination. I wrote my mother: “I wish we could all come out with statements.” Her wise response: “Maybe you should write a statement and send it out to every Mississippi author you know to see who wants to co-sign.” So I struggled to define my feelings: my complaints, my disbelief, but also my sense of responsibility for this state that was being hijacked by its most conservative element. Mississippi is not a stereotype. I wanted progressive locals to see their own views represented, and I wanted to send the rest of the country a reminder that Mississippi is a battleground, not a foregone conclusion.

At 9:30 pm, I sent my mother a draft of the statement. She recommended getting rid of the phrase “like a tribe of prejudicial bison.” Me: “Deleting ‘prejudicial’ won’t make that phrase more palatable? Strike the bison altogether?” Her: “I’d definitely strike the bison.” I compiled a list of all the writers I knew—those who were born here; those who had moved here—and ferreted out email addresses, getting excited by my expanding list and also a little terrified at the prospect of reaching out with such a political plea, in some cases to people I knew only by reputation.

At 11:00 pm, my finger hovered over the send button. Am I doing this because it’s 11:00 at night and my faculties are dulled? I was encouraging my correspondents to pass it along to other Mississippi writers they knew, and I asked meekly in a postscript if anyone knew how to reach John Grisham, Donna Tartt, Natasha Trethewey, Kathryn Stockett. These people are going to think I’m crazy. I sent it.

By midnight, I had gotten responses from six writers, including Jesmyn Ward and Kiese Laymon. By noon on Friday, I had heard from over fifty. Over the weekend, our makeshift, serendipitous network continued to grow. Poet James Kimbrell got in touch with Robert Olen Butler and Kelly Butler; Kelly emailed Ann Patchett; Ann reached out to Donna Tartt, and suddenly there was Donna’s name in my inbox. I heard from authors who had been publishing for years, magazine editors, MFA students, poets, teachers, writers who were gay, writers who were Christian, writers who were black nationalists, all of whom were as fired up about HB 1523 as I was.

On Monday morning, I sent the statement and our list of 95 names to 13 local papers, 13 national outlets, 69 house representatives, and one governor, and then sat very quietly on my sofa, holding my breath.

Since Monday, the story has snowballed into legitimate national news, and over thirty writers have asked to be added to the list, including Pulitzer Prize winner Beth Henley and the inimitable Elizabeth Spencer. This morning I read the comments on the national sites and was reminded how vital our particular voices are. “There are 95 people in Mississippi that can read AND write?” observed one. “That number sounds high.” There’s an image of Mississippi in the national imagination, and then there’s the reality that we writers experience: this state is politically complex, crowded with dissenters, and home to a diverse, loving, and culturally rich populace that has inspired great literature for generations. A group of politicians is attempting to censor that. None of us could stay silent. 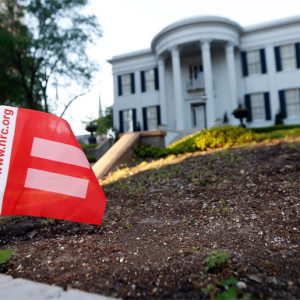 Writer and Mississippi native Katy Simpson Smith spearheaded the effort to organize the group of 95 Mississippi writers who signed...
© LitHub
Back to top