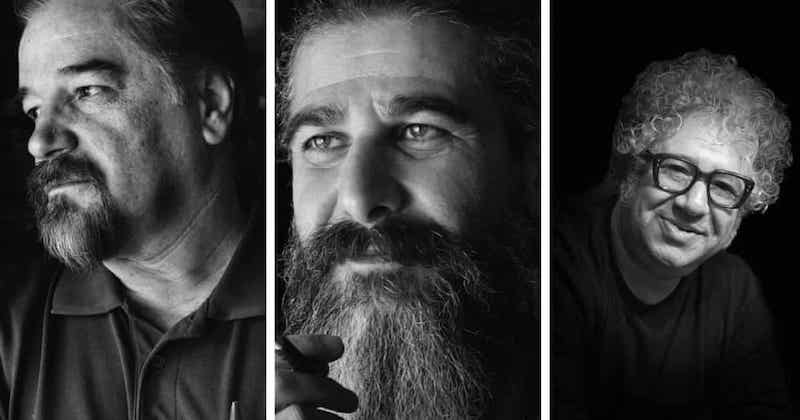 Abtin is a poet, screenwriter, and filmmaker; Bajan, a novelist and journalist; and Khandan Mahabadi, an author, literary critic, and pop culture researcher. All three are centrally involved in the anti-censorship group Iranian Writers Association—and have been targeted by the state for that reason. In 2015, according to PEN America, security forces raided the writers’ homes, seized their written works and materials, and questioned them about their work as well as the work of the IWA; after another detainment, a court convicted the writers of “colluding national security” and “spreading propaganda” in 2019 and sentenced them to a collective 15.5 years in prison.

The writers’ sentences began in 2020 at Evin Prison, where six guards are being prosecuted after footage of them abusing prisoners was leaked in August. Since their imprisonment, both Abdtin and Khandan Mahabadi have contracted COVID-19 and have received no treatment. PEN America has awarded Abtin, Bajan and Khandan Mahabadi the PEN/Barbey Freedom to Write Award, in the hopes of getting them released due to the global attention and pressure the award creates.

The collectively authored letter calls for Raisi to release the writers; to “acquit them of all charges in the legal case wrongfully brought against them”; and to “cease official retribution against all writers exercising their right to express themselves freely.” Signatories of the letter include prose writers Margaret Atwood, Sandra Cisneros, Michael Chabon, Jonathan Franzen, Mary Karr, Chang-rae Lee, Orhan Pamuk, and George Saunders; playwrights Ayad Akhtar, David Henry Hwang, Stephen Sondheim, and Tom Stoppard; and actors Meryl Streep and Alec Baldwin. (The list goes on.)

Reads the letter, in part, “Despite the risks, Abtin, Bajan, and Khandan Mahabadi have nevertheless carried on the legacies of late Iranian poets, intellectuals, and dissidents by organizing memorials, literary events, newsletters, and other publications—activities that, to the judiciary, amount to serious crimes. It is high time the Iranian state respects the free expression rights of Iranian writers, poets, and thinkers and recognizes the rich traditions of Iran’s diverse literary community.”

Read the letter and see the list of signatories here.