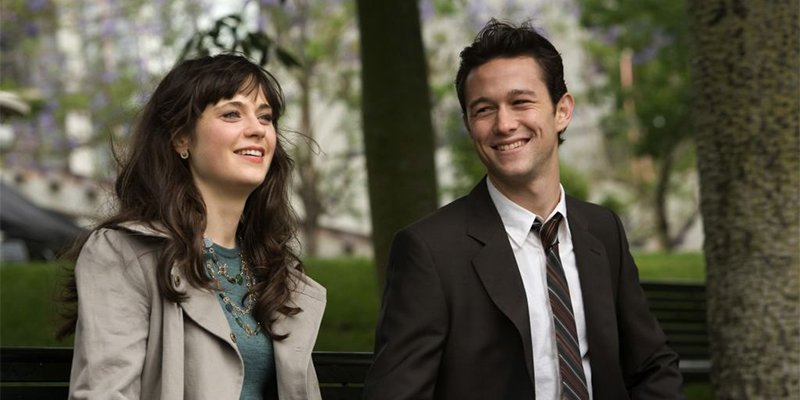 There’s a line in 500 Days of Summer that every book lover has undoubtedly clocked. It’s towards the end. Way after they discover they both love The Smiths in the elevator, after the copy room kiss, after karaoke, after running through the aisles of IKEA. It’s after they stop seeing each other, after they dance at a friends’ wedding, after Summer gets married to someone else.

It’s from the scene where Summer and Tom are sitting on his favorite bench. She puts her hand on his, and we see her wedding ring. He’s going on and on about how everything he’s believed in is a lie because love is utter bullshit. Soul mates don’t exist. And then she says the whole time she was falling in love with this other guy, she kept thinking that Tom was right. (Ouch.) Fate is real.

The line in question is this: “Well, you know, I guess it’s ’cause I was sitting in a deli and reading Dorian Gray and a guy comes up and asks me about it and… now he’s my husband.”

It’s brilliant. Say what you will about all the other references tossed into this movie to feed the illusion of the Manic Pixie Dream Girl (The Smiths, Belle and Sebastian, Ringo Starr), but the inclusion of Oscar Wilde’s Dorian Gray was a stroke of genius.

As you, reader of this site, know: The Picture of Dorian Gray is a story about a man whose youth and beauty remains unchanged because his soul resides in a portrait. The person devotes his life to pursuing pleasure (read: sin) while the portrait transforms into something ugly. It’s a book that breathes aestheticism, that asks questions about the role of art and whether morality has any place in its creation.

It so perfectly mirrors everything that went wrong with our couple here. While they’re on the bench, Tom chides her for not telling him about her new love sooner. He demands to know why she would dance with him at their friend’s wedding if she was otherwise involved. Her answer is simple: because she wanted to. A modern Dorian Gray. Tom is incredulous: “You just do what you want, don’t you?” Sweet, sweet puritanical Tom.

Also Tom was so enchanted by the idea of Summer as his dream girl that he was blind to the reality of their situation. There’s a bit about halfway through the movie that’s done documentary-style. All the characters, it seems, have been asked to describe their dream girl. Tom’s best friend, who’s been in the same relationship since childhood, says that his girlfriend is nothing like his dream girl, but she’s better “because she’s real.” Take note, Tom! He had given all of himself to this relationship because it matched the greeting-card-worthy, Hollywood-perfect picture he had in his head, but he was never really able to scratch the surface. The Manic Pixie Dream Girl is, after all, the pinnacle of youth and beauty—or at least it was in 2009, when this movie came out. It, much like Dorian, has not aged well.