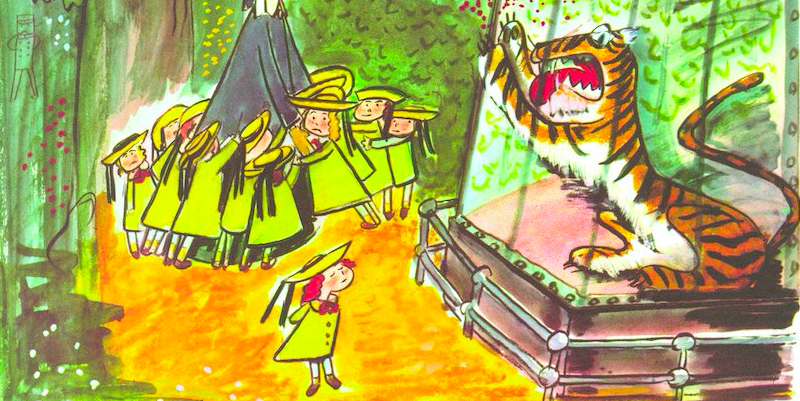 Ludwig Bemelmans, beloved author of Madeline, once shot a man.

Ludwig Bemelmans, the author and illustrator of the Madeline books and an artist whose paintings often appeared on covers of The New Yorker (as well as on the walls of the Carlyle Hotel), did not begin a career in the arts until his 30s. Before the, he mostly worked in hotels, starting when he was a teenager in his native Austria.

Born in 1898 in the region of Austria that is now geographically Northern Italy, Bemelmans had a fairly unconventional life. He was raised by a single mother (his father, a hotelier and painter named Lampert, had left her while she was pregnant, and he had also impregnated Bemelman’s soon-to-be governess, abandoning them both for yet another woman). And after Bemelmans’ governess committed suicide shorty thereafter, his mother was left alone, at age 24, to raise her son.

As a boy, he frequently got into trouble at school, and when he became a teenager, his mother sent him to work for his Uncle Hans, a hotelier. The young Bemelmans was employed in the restaurant, under a cruel headwaiter. In a 1941 interview, he told The New York Times about a skirmish between the two that resulted in Bemelmans shooting his boss and eventually fleeing to the United States—an escape which had actually been advised by the police (this seems very European to me). Bemelmans explained:

The headwaiter at that hotel was a really vicious man, and I was completely in his charge. He wanted to beat me with a heavy leather whip, and I told him that if he hit me I would shoot him. He hit me, and I shot him in the abdomen. For some time it seemed he would die. He didn’t. But the police advised my family that I must be sent either to a reform school or America.

He was only 16. Arriving in New York City on Christmas Eve in 1914, his family told the Times, he planned to meet his father again. But his father never showed to pick him up, so the boy spent Christmas at Ellis Island, alone. He began to work in hotels, pausing for a trip to travel to Glacier National Park, and to serve in the army during World War I. While at the Ritz, according to his obituary, he was fired for breaking too many dishes and had to go work at another hotel restaurant, but there he stepped on the toes of a famous Shakespearean actor and caused a stir, so left to take back his old job at the Ritz, at a pay cut.

But eventually, as he moved up through the ranks, his position afforded him the life of luxury he had always craved, and which he gave up to be an artist. His first children’s book, Hansi, was published with Viking Press in 1934. And in 1939, after traveling to Paris and incidentally encountering a little girl who had been in the hospital with a burst appendix, he wrote the book that would come to define his career.