On this episode, Kate Hollander talks about Bertolt Brecht’s life and work. She also talks about the community of artists who were his friends, lovers, and collaborators.

Michael Robinson: What did you learn from the poetry about that relationship that Bertolt Brecht and Margarete Steffin had as collaborators?

Kate Hollander: So, I’ve alluded a couple of times now to the controversy around Brecht’s authorship, and that very much intersects with the controversy around his sexual relationships and romantic relationships. You’re right, he was still married to Helene Weigel [when he had a relationship with Steffin]. In fact, he was married to her until he died. And they were very much artistic partners. He was a playwright; she was an actor and director. They ran their theater together when they returned to Berlin after World War II. But he had many other liaisons, and Steffin was one of them. She was actually Weigel’s friend first, and the two women maintained a friendship. I mean, certainly, I think an uneasy one at times, but they were to a certain extent quite devoted to one another.

But there are these two camps around Brecht’s relationships. The older camp is sort of, “Well, unfortunately, boys will be boys. He was a communist, he had a lot of lovers, and yeah some of them were helpful to him in his work, but let’s not worry too much about that.” And on the other end of the extreme is, “This guy is a plagiarizer and he’s sexually exploitative, and these women, they wrote things and then he just took them.” And for me, neither of those two poles really gets at it. Neither of them explanatory. It just doesn’t do it.

One of the things that I was hoping the poem [“After the Death of My Collaborator, MS”] would give me, and I think it did, was a look into what it meant that they were fellow fighters in the fight for socialism and against fascism. They were tender with each other. They were dear lovers and friends, and they were also artistic partners. And she could be quite harsh as a critic. Harsh isn’t the right word—stringent maybe is the right word. She was an ambitious critic and an ambitious editor for him.

I think the poem, because it moves through these different modes, it gives us a little bit of clarity around that. Now, the flaw here is that we don’t have her voice speaking back to him. But they did exchange many sonnets, each of them, writing poems and sending them back and forth. There have been other scholars who’ve written really well about the exchange of poetry, their two voices going back and forth.

Michael Robinson: Your article begins talking about how these poems give the reader a new view of these intersections between antifascism and socialism and exile and interdependence and love. And I underlined that as I read it, because I was thinking, I don’t think I’ve ever read an academic paper that talks about love as a thing. Was this a conscious decision on your part?

Kate Hollander: I don’t know how you can really write about a lament like “Das Steffinische Sternbild”—that’s the German title—without talking about love. Translators and scholars now put the poem in a different order, or they consider it maybe as separate poems instead of one long poem. But I think the way these editors had it, the second stanza or the second section, which starts in English, “My general has fallen. / My soldier has fallen.” I mean, reciprocity in these couplets and the devotion there is really heartbreaking. At some level, it’s totally desexualized. It’s not at all clear even what the gender of these people are, what their relationship is. But there’s a dedication there and a love there that I don’t how you would write about this poem without saying, okay, there’s something going on here.

I think it’s important, too, because to be critical of Brecht is really important. I don’t think that he was somebody who transcended the sexism of his day, and in fact, he may have embodied more than his fair share. But the idea that these were not people who loved one another I think is really an untenable notion.

Kate Hollander is a historian of modern Europe. She’s also the author of a book of poems, My German Dictionary, which was awarded the Anthony Hecht Poetry Prize by USA Poet Laureate Charles Wright.

Interview with Marin Ireland, Narrator of Leave the World Behind by Rumaan Alam

How Do We Make Sense of Mass Atrocity? 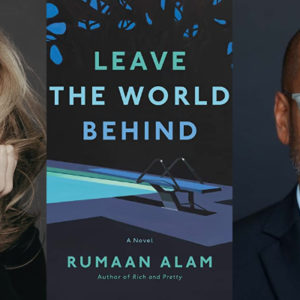 Interview with Marin Ireland, Narrator of Leave the World Behind by Rumaan Alam