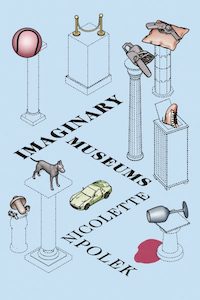 The following is a story taken from Nicolette Polek's collection, Imaginary Museums published by Soft Skull Press. Nicolette Polek is a writer from Cleveland, Ohio. She is a recipient of the 2019 Rona Jaffe Foundation Writers’ Award.

Biba scoots around in the airplane seat, feeling for her headphones. The upholstery itches and the cool air nozzle is unavoidable. She feels a melancholy for everywhere she is leaving, as though she will be leaving forever.

The passenger next to Biba wears big yellow beads and prays. She prays for a safe landing, but also for death to her husband, and the whorish violinist who took him. During a quieter part of the flight, she turns to her little airplane window and whispers down to everyone below that soon their sweet soul pain will come.

The flight attendant is plump and comfortable like a babysitter, or a sausage, and she tottles down the aisle to make an announcement. The turbulence on the small aircraft gives Biba a bellyache. She wants an Ambien and a kiss.

Over the speakers, the flight attendant whispers, “We are lost.” Various facial expressions pass through the plane. The flight attendant goes on to say that the pilot has “never seen this place before,” how, according to the navigation system, we are passing over “somewhere that should no longer be there.”

Biba stretches to take a look. Outside are bursts of clouds and brown patches. Biba shrugs at the woman with the big yellow beads.

“Looks the same,” she says.

The plane appears to be going slowly, as though moving through something thick. A strange feeling spreads through the cabin, like a body ache.

Other, less comforting flight attendants in starched uniforms file through the plane, reminding everyone how to deploy their air masks, urging everyone not to look out their windows.

The clouds and hills are simple and familiar.

The pilot starts to speak over the intercom. He tries telling jokes, and proposes questions for the passengers to discuss, like “what is your favorite dinner dish?” and “where was your favorite vacation destination?” Biba answers all his questions in her head. They calm her down. She feels like she could die peacefully to this. The woman with the yellow beads hisses at a family in the row in front of them, then starts to hyperventilate. Outside, the sky gradually shifts to a vibrant magenta. Outside, the clouds become spherical and silver. The plane appears to be going slowly, as though moving through something thick. A strange feeling spreads through the cabin, like a body ache.

After an hour, the flight attendants’ voices become shrill, and their brows furrow fearfully as they assemble at the back of the plane, where they take bottles of slivovitz from behind a black curtain. A man in tears joins them. The woman with the yellow beads joins them. They take swigs while looking out, pointing at the abstract and hellish landscape, inciting panic in one another, their mouths gumming down. They drink so suddenly that they drop empty bottles, which cover the floor in shattered glass. Outside, the sky is black, and flames engulf the clouds. There is an evil sound that brushes up against the side of the plane.

Eventually one passenger opens the small exit hatch, as a joke, but then climbs through it anyway, and the other passengers follow, one by one.

After some time the plane is empty, except for the pilot, Biba, and a long hurry of wind.

“What kind of music do you enjoy?” the pilot asks. Biba’s body feels hot. The pilot plays a Strauss piece over the speakers.

“Where do you wish you were sitting right now?” he asks.

The terminal is an empty room; it smells like a rubber glove.

“If you could run into anyone at the library, who would it be?” he asks.

Biba hums. Biba wants to ask the pilot questions too.

“Can you hear me?” the pilot asks.

Biba wishes she could walk up and sit beside the pilot. She cannot bring herself to move. He seems like something that appears to be walking closer, but is permanently standing still.

Can he feel that she is somewhere in the plane with him? That she stuck around? She wonders if he thinks about family, God, or someone he loves when he flies. She wonders if he owns pets who greet him with uncontainable joy, and if he holds the door open for people who are far away.

“What will it look like when we land?” he asks. I’ll hold your hand as we exit the plane, Biba thinks.

The terminal is an empty room; it smells like a rubber glove. A baggage boy sleeps in a red chair. We get into your car and drive in the rain. We sit side by side. We don’t say a word. We don’t look at each other. You park alongside the shore. It’s the most comforting thing in the world.

She leans deeply into her seat.

After a long time, she hears his voice again. It is quiet, and she listens for footsteps.

Outside, a grove of lemon trees. 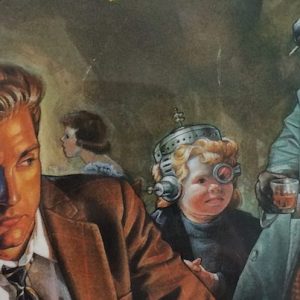 Jonathan Lethem's first novel, Gun, With Occasional Music, is finally headed to TV. Today, Deadline announced that a Jonathan Lethem novel is going to be adapted for the small screen—no, not another version...
© LitHub
Back to top