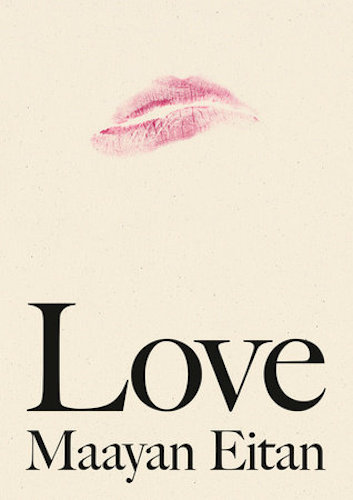 The following is excerpted from Maayan Eitan’s debut novel, Love. Eitan’s short fiction and essays have been published in The Kenyon Review, World Literature Today, and The Tel Aviv Review of Books, and her work appears regularly in Israeli literary magazines. She holds a master’s degree in comparative literature from the University of Michigan, Ann Arbor, and is currently pursuing a PhD in Hebrew literature in Israel. She lives in Tel Aviv, Israel.

We lied to our parents. We lied to the law. We lied in cheap restaurants, we lied in bars, we lied in factories for assembling aluminum tools, our hands moving skillfully on the assembly line. We lied to the university, we wrote them: I come from a poor background. My parents are state workers. Please give me a scholarship so that I can learn a profession. We lied to our best friends. We had best friends. We lied to them. We lied to our husbands. We didn’t tell them where the money came from. No, we didn’t tell them we had any money. We told them we don’t have any. But the money piled up. Our makeup dresser drawers (we didn’t have a writing desk; that was a lie. We didn’t write) filled with new bills every night. We didn’t tell our nieces and nephews where the toys we bought them came from (we lied in the toy factories, we lied when we said that there were toy factories, we lied when we wrote. We didn’t write). We lied when we wrote letters to the income tax offices. To university administrators. We lied to our husbands. We didn’t have husbands. We lied to them. We lied to our pimps. Our lies were wiped off our lips like the blue eye shadow on the china dolls’ eyelids in the factory. Listen to me: I grew up in a train car. No, I’m not kidding, a train car. They had to get a crane to bring it to the wadi (in Hebrew: ravine, valley) and put it in the dried-up riverbed. The year was nineteen-eighty-eight. They pumped the water from a nearby well (Hebrew: thieves) and for electricity they used a generator. My father weeded the wild thorns. My mother gave birth and gave birth until she couldn’t anymore, and at night we spread blankets on the floor and slept on them. Two adults and four babies. No, I’m lying again: two babies and four adults. Or half-half. Never mind; my mother milked the goats so she could give the milk to my father and us (a strong press on the goat’s udder, the smell of sweat and sex and the dirt of the chickens that ran to and fro on the balcony. What balcony? I’m not lying, there was a balcony). We wandered around barefoot and naked. The train car took off every night. Who does the world belong to? Us. My father bought a herd of cattle. Four hundred of them! The first word I learned was primipara (the smell of sweat and sex and burned meat rose from their bodies, a bad smell against the green smell of the weeds in the wind). We marked them with a branding iron. I’m not lying! Our money ran out. My sisters and I stole bread slices from the dining room of the nearby kibbutz. We had lice, their movement was delightful when they shaved our long hair, that earlier shone in the sun, to the scalp. Let it be a lesson! In the train car they assembled a small kitchen. The farm was a haven. But don’t trust them. The cows, we slaughtered. No: we sent them away, so others will slaughter them. We smiled. We learned how to sew, we danced. The curtains flew in the heat, the wind. We ran after each other in the yard, the mountains, in the dried-up riverbed (thieves, where is the water?). We had all that we could think of. Dolls that stared at us with their china eyes (we lied in court, in school, we lied to our husbands). Books to read (the first words I learned: Shhhhh, don’t worry, everything will be all right). They protected us. The army came and protected us. We were respectful. Thank you, Father. Thank you, Mother. They loved us. Thank you, soldier. We grew up. Our feet turned a little inward. It’ll pass before you’re married, said the doctor they sent us to. Thank you, Doctor. Don’t let the boys do that to you, said the kindergarten teacher (everywhere our feet stepped on we loved, everywhere they loved us. Who does the land belong to? Us), so you’ll be able to get pregnant later. Thank you, kindergarten teacher. Do you want to work tomorrow? said Assaf. I got my period, I told him (did I lie? I didn’t lie this time). There’s a place that sells cheap sponges to the girls, the driver can take you, your choice though, he answered. I’m in, I answered. 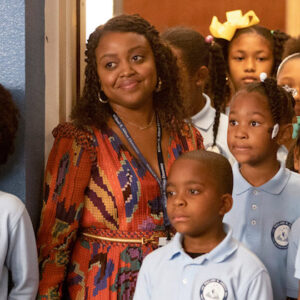 Abbott Elementary is bringing free book fairs to underfunded schools. Critics and audiences are hailing the release of Abbott Elementary, ABC’s new workplace sitcom created by and starring...
© LitHub
Back to top