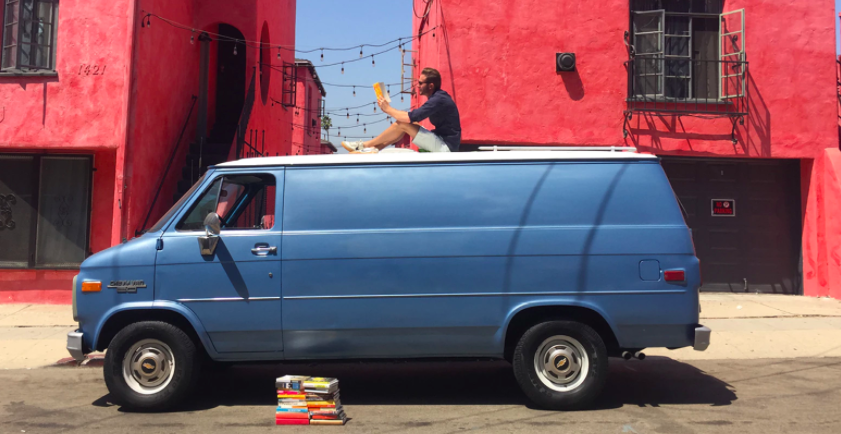 In a City Where Car is King, the Books Will Come To You

Say you live in Los Angeles and want to visit an independent bookstore to browse for a new title or attend an author reading. Would knowing you have a long commute dampen your resolve? For many Angelenos, it would. “The public transport in LA is pretty bad,” says Emory Harkins, who moved to LA from New York City a year ago. “You might have to drive 45 minutes or an hour just to go to a bookstore.”

When Harkins and his partner, Alexa Trembly, first moved out west, they noticed that the traffic and the allure of Hollywood created a barrier to having the same kind of literary community they enjoyed in New York. “Whenever we found writer friends who didn’t write [screenplays], it was an instant bond,” says Trembly, a native Midwesterner who met Harkins at Pratt Institute’s short fiction program. “We felt like those people were kind of hard to find.”

So the pair decided to do something about it, by making connecting to books and other writers easier. Their solution? Driving the bookstore to the customers, instead of the other way around. That’s how Twenty Stories, an independent, mobile bookstore owned and operated out of the back of a 1987 Chevy G20 van, was born. “The whole idea came out of the LA culture,” Trembly says. “We decided we wanted to create a space where people can come together, and also support writers who have less visibility in larger bookstores. That, combined with LA being such a sprawling city, [is how] we came up with the mobile bookstore idea as an easy way to go to people. Because in LA, if it’s not close to you, you’re not going to go to it.”

The plan is simple. Every month, the pair will curate a list of 20 titles of fiction, nonfiction, poetry, and a literary journal or two. Then, similar to a food truck or a roving fashion boutique, they’ll park near a popular spot—a public park, a university quad, or the beach—and set up shop. The van will convert into a cafe on wheels, with hot brewed coffee, wireless Internet, and charging stations. And of course, like any good independent bookstore, they hope to offer conversations and connections around literature. Though the van may be always on the go, they hope their customers won’t be. “[We want] more of a conversation and a gathering space,” Harkins says. “We want people to sit down and hang out and relax with us, and talk to us about what they’re reading and what they’re writing.”

To accomplish this, Harkins and Trembly will be reading each title they sell, in order to give quality recommendations to customers. They have a few different selection criteria, choosing from a wide variety of subject matter, authors from different regions, and independent presses. In order to stay relevant and give the widest amount of publicity to lesser-known voices, they plan to completely overhaul their inventory each month.

With only 20 titles to keep track of, they hope to be able to offer the best possible recommendations to prospective readers. “If someone comes up to us and says, ‘I like reading crime fiction,’ but we don’t happen to have any crime fiction, we can say, ‘What do you like about crime fiction?’” Harkins says. “‘This book’s kind of in that vein—it’s a more plot-driven, suspenseful book.’ [We’ll] be able to talk to our guests and readers about what they like and find something for them.”

Trembly adds, “I think you’re able to cover a lot of ground in twenty titles. That’s why we’re so excited about curating a list. Sometimes, when you walk into a bookstore and there are a few hundred books, what are the chances you’re going to go pick a random one that really inspires you? Being able to de-clutter the mental space in looking for a good book to read, and also the spontaneity in seeing the van and stumbling upon it, will create some organic, new experiences for people.”

In addition to operating Twenty Stories, Harkins and Trembly also publish Palm Leaf, a monthly online periodical that serves as their very own literary magazine. Palm Leaf will keep the public updated on their whereabouts and upcoming events, but it also reflects the pair’s commitment to publishing new writing. “We’re only going to be running one poem or story or essay every month,” Trembly says. “Hopefully, it will be a new or emerging voice, so there’s new work coming out of the van as well.” She adds, “So I guess you could technically consider it twenty-one stories.”

The van has already been purchased and given its tune-up, and the store officially kicks off in early November. Their Kickstarter, which ended October 1, reached its $10,000 goal long before the deadline. Donations poured in from all over the world—London, Bangkok, and Tel Aviv, just to name a few. With what was left over, Trembly and Harkins will purchase amenities that will give Twenty Stories customers the best experience possible. “Additional money will be going towards an awning cover that will provide a cooler experience for the customers, or solar panels for the roof so people can sit at the cafe and charge their computer or phone,” Trembly says.

Between owning and operating a mobile business, curating a list of twenty new titles each month, and publishing an online periodical, when will Harkins and Trembly find time to focus on their own writing? They’re in a writing workshop right now with some close friends, but they have even larger plans down the road for the van to support new writing. “That’s another thing to add to our list of everything we plan to do—eventually in the future, we want to have writing workshops held at the van,” says Harkins. “Small classes of four or five writers [where] everyone gets together and workshops each other’s writing.” As if all of that isn’t enough, they also hope to partner with bars and restaurants to host readings and workshops that will give emerging voices the platform they need to be heard.

It’s a lot for two people, but Trembly and Harkins see it as their duty as part of the literary community they wish to help build in LA. “We felt like we have to support other writers and readers and artists to be doing our part for the community,” Trembly says. “That’s really where our passion and our mission comes in—we wanted to contribute in another avenue.”

She adds, “I see reading and writing as a political act. We’re really approaching this as a way of spreading narratives that we think are important—socially, politically… everything that art combats or adds to the conversation. That’s our mission and our drive.”

Crimes of the Father 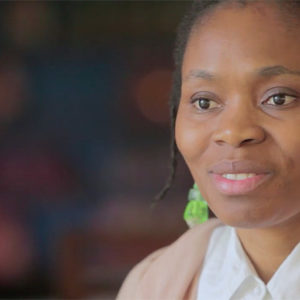 Most people would spike an idea if the business plan revealed negative numbers year after year. But Bibi Bakare-Yusuf is not most...
© LitHub
Back to top