Crimes of the Father 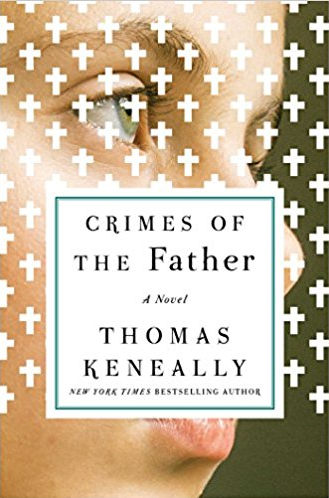 The following is from Thomas Keneally's novel, Crimes of the Father. A a bold and timely novel about sin cloaked in sacrament, shame that enforces silence, and the courage of one priest who dares to speak truth to power. Thomas Keneally has published thirty-two novels since, most recently Shame and the Captives and the New York Times bestselling The Daughters of Mars. He also wrote Schindler’s List, which won the Booker Prize in 1982.

Sarah was fourteen when she ran an errand to the presbytery, with a message from one of the older nuns to the polished young priest who was curate to the parish priest, himself a monsignor. The housekeeper left her waiting at the door and went to get the younger priest. He bounced downstairs buttoning his cassock. His neat brown hair was brushed flat, his cassock impeccably black, no scurf, no tobacco flakes or ashes.

“You caught me watching television,” he told her with a smile. Some priests looked almost as disheveled as her father, but there was another kind who smelled of soap and some hair preparation or aftershave. Fragrant priests. This man was that kind. And in the presbytery front hall there was none of the dusty, musky smell of the house she lived in, humid with her mother’s unhappiness and her brothers’ imaginings; home, too, of the tropic of shame that she could never again mention to her mother.

The priest read the note she gave him. He looked up. “Mother Alphonsus says you are very competent,” he told her. “And that you’ve helped them a great deal with their office work. I’ve been asking for someone to help us—running messages, organizing files. I promise it’s not because I’m lazy or watching TV all the time.”

At that second she loved the Church, the sane face of Mother Alphonsus the ordered face of this priest. Father Leo Shannon.

He led her upstairs to a room with a desk, filing cabinets, a picture on the wall of a saint she could not identify, and a settee under the window. The floorboards were varnished but there was a mat spread as neatly as a little lawn. He showed her how the parish filing was done—letters from the archdiocese, the replies, files on parishioners, references for job-seekers, notices of bereavements and of parish social events, as well as bills paid and donations received. I will not look in the Fagan dossier, Sarah decided. In fact, there was an embarrassing question to which she did not want the answer. What did Father Shannon know about her family?

“I know I can depend on you not to snoop inside the files,” he told her as if he had perceived her thoughts. “They are confidential, and I keep your mother’s file as secret as I wish to keep the others. That’s why I asked Mother Alphonsus for an entirely reliable girl.”

He further confided to her, “To tell you the truth, the monsignor is so busy on God’s matters, and with golf on Mondays, that he has let the church records slip a little. You are going to help me get them under management.”

He said that, about the monsignor not having time, with a kindly irony, but again he had taken her into a secret, as he had when he’d confessed to watching television. She was flattered to be confided in.

As she was alienated from her own household, the presbytery became Sarah’s vision of home. Everything shone; the carpets were vacuumed; the walls were white and sparsely decorated with portraits of recent popes, reproductions of Raphael’s Madonna and child, bright statuary, and photographs of various clergy. She would in time come to see this ecclesiastic decor as sterile, but it seemed to her then to be a space made for devotion and in which good works might flourish.

She wanted it because she did not want what was at home: a marriage sacred only in its origins, a venue of unpredictable tears and gestures and of such low exuberance as her brothers’ farting contests.

Father Shannon and Sarah worked cooperatively. He would give her a letter and tell her which folder to put it in and under what alphabetic listing. Financials—electricity, gas bills, rates—she filed in their own drawer, to be used for the parish’s financial statements by the honorary treasurer. The priest told her she was a fast learner. Passing papers, dressed in his collarless white shirt and black trousers and impeccable shoes, he said like a confession, “I just can’t stand things not being in order.”

And it was obvious to her, his hunger for orderliness.

Over time, the monsignor himself asked her to run errands when he was in, to take notes to various parishioners, generally members of his parish council, occupiers of neat brick bungalows, owners of good cars. Men of substance. Or else to the ladies of the sodality who did the altar. But the monsignor was out a lot, and what she did above all was work for Father Shannon.

In between these tasks, said Father Shannon, she was welcome to attend to her homework. So, within the presbytery, sitting in its dusted chairs, on its polished wood, she did her trigonometry and her French.

From Crimes of the Father. Used with permission of Atria Books. Copyright © 2017 by Thomas Keneally. 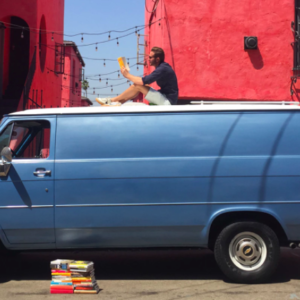 Los Angeles is Getting Its Very Own Bookmobile Say you live in Los Angeles and want to visit an independent bookstore to browse for a new title or attend an author reading....
© LitHub
Back to top