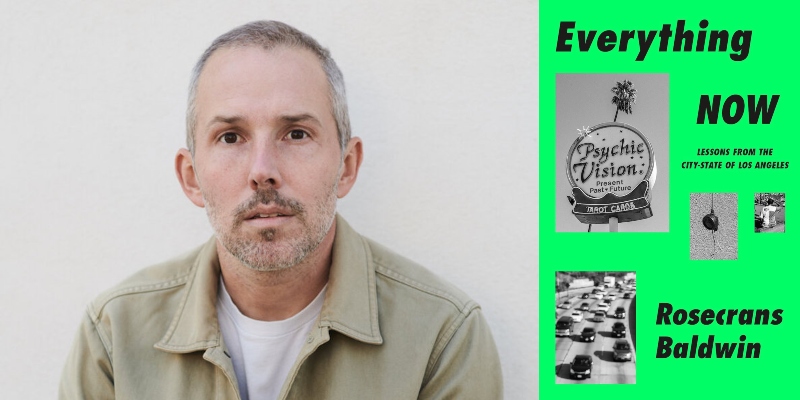 Los Angeles is a hundred suburbs in search of a city, or so it’s been said.

In his new book about Los Angeles, novelist, and nonfiction writer Rosecrans Baldwin—a somewhat recent transplant to the city from the East Coast—tackles the famous quip and expands on it. His premise in Everything Now: Lessons from the City-State of Los Angeles (MCD/FSG, 2021) is spot-on: “Functionally, aesthetically, mythologically, even technologically, it is an independent territory, defined less by distinct borders than by an aura of autonomy and a sense of unfurling destiny—this is the city-state of Los Angeles.”

Baldwin spent years reporting on this book before finally finishing it during the pandemic last year. He looks at the city through so many prisms and angles, it’s impossible to finish reading Everything Now without acquiring a deep (or deeper) fondness for LA.

The book is an exploration of the city, its people, and its culture. And as stated on the sell copy of the book, in Los Angeles, “you have no better plan that exists to watch the United States’ past, and its possible futures play themselves out.” Like Thom Andersen’s magnum opus, the documentary film Los Angeles Plays Itself, Everything Now is a deeply researched, and well-argued street-level view of the city—the good, the bad, and the ugly.

J.C. Gabel: I love the structure of the book, and I’m curious how you arrived at it. It almost has this elongated-footnotes format that helps you dive in and out of different narratives. Did that happen in the editing process, or did you organize it that way from the get-go?

Rosecrans Baldwin: I started out knowing how it would be organized but not knowing if it would work. The inspiration has literally nothing to do with Los Angeles. In fact, it was a structure I had tried and failed to use in a novel.

To take a step back, in college, I had a roommate who studied philosophy. He had this book for class called the Tractatus by Ludwig Wittgenstein. The idea of the book, which is quite short, is Wittgenstein trying to create a series of statements that would say something about the relationship between reality and language. The book is about seven chapters long, and each chapter is only a couple pages. Each chapter starts out with a numeral. Let’s say 1.0 is a statement that the author believes to be true; 1.1 takes that statement and expands upon it or says, “If that’s true, then perhaps this is true.” The idea is to build some kind of true statement through the course of the chapter and the book as a whole. I thought it was so compelling, and again, I tried to use it in fiction, and it really fell flat.

For this book, I was coming to the topic of Los Angeles from a lot of different directions. I was coming toward it out of intellectual interest, out of a weird, romantic attachment, and out of a sense of home that was a mystery to me. Why did I feel at home in LA when I had nothing to do with LA? I was also coming at it out of anger and despair. We live in a part of Hollywood where people’s tragic futures are playing out really close to the bone every time I walk out my door. That is part of how I see and experience Los Angeles. I needed a structure that could contain different directions and also include so many of the voices I’ve found so informative about LA, whether it’s the people I’m reading, like Octavia Butler and Mike Davis, or the people I’m interviewing. I also needed voices from history and snippets from newspapers.

Over time, as you read the book, you will start to have a cumulative sense: Here is a picture of what life is like in LA right now and how it got to be that way, at least based on the stuff that Rosecrans has put in this book. Again, you can’t write a definitive book about Los Angeles. It’s too massive, too varied, too diverse. As multiple people told me, Los Angeles defies single stories, and I never wanted to try and do that. It was more a question of how to understand LA a little bit better. Using a structure that lets me come from multiple angles and build towards a singular effect was really appealing for that reason.

JC: I love how I can sense your adoration for the city, but you don’t look at it through rose-colored glasses. That’s something that happens a lot here; it’s a myth-making town. I think you have to explore the city warts and all. I love that you got into the wellness-shaman-enlightenment BS that still happens here en masse. The homelessness and the insane income inequality, too.

One factoid stood out to me because I have kids in the school district: 80 percent of kids in LA Unified are living below the poverty level. In some ways, the city-state of Los Angeles is a diaspora of everything wrong with late capitalism. I think your clear-eyed look at it, where you can love it despite its flaws, made the book more penetrating.

RB: I appreciate you saying it that way. My feelings about Los Angeles, as sincere as they are, do contain this side of me that looks at everything from an artistic perspective, which is to say, as a writer. LA has all these stories lying around in the sidewalk, going by untouched. There is so much material here. There’s that great Joan Didion essay either in The White Album or Slouching Towards Bethlehem, where she’s at a hippie loft in San Francisco and witnesses this young kid who’s been given acid by his family. It’s awful, but at the same time, someone asked her in that recent documentary what she saw in that moment, and she said something to the effect of, “It’s just gold.”

As a writer, when you’re working on a piece, as horrible as it is to say, if a child in front of you is taking acid, and you can use that moment in your description of these people in this place in this time, it’s gold. Los Angeles is covered in gold if you’re a writer. Here’s the drama, here are the people, all these places and all these stories. It doesn’t quit giving when you ask of it.

Rosecrans Baldwin is the author of The Last Kid Left, You Lost Me There, and Paris, I Love You but You’re Bringing Me Down. He is a frequent contributor to GQ, and co-founded the online zine The Morning News. He lives in Los Angeles.

Why Putin Might Be Right in Opposing the Growth of NATO 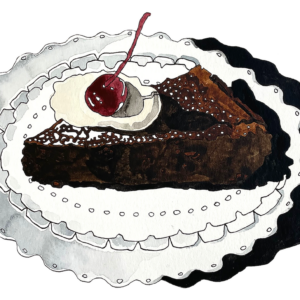 Feature image by Forsyth Harmon. He left me again in December. I returned to my childhood home in the suburbs of Paris for Christmas....
© LitHub
Back to top