Early one morning, driving south, James Cordero described his grandfather’s crossing story in terms of the Mexican Repatriation, the 1930s forced mass deportation from the United States of Mexicans and Mexican Americans. Robert A. Cordero had originally crossed in the ’20s, part of one of the first waves pushed out, but he kept coming back. Cordero said his grandfather would sneak in, get caught, sneak in, get caught, same location, same agent, until the agent finally said, “If you do this one more time, you’re going to be locked up for good.” So his grandfather found another way in: he enlisted in the U.S. Army, kicked some ass, killed some Nazis. “And back then it was automatic,” Cordero said. “You got your naturalization when you left the military.”

On the highway, the early sunlight was so bright, cars around us looked like gold bricks. Cordero and his colleague Jacqueline Arellano, riding shotgun, told me they often spent their weekends doing their own sort of border crossing, not so much crossing as skirting. The two of them were trackers who scouted migrant trails in California’s southern wilderness (I was asked not to reveal where) on behalf of a nonprofit organization called Border Angels that, among other activities, frequently led volunteers on aid missions into the mountains, to leave behind stores of water, food, and clothing to prevent people from dying from heatstroke in the summer, hypothermia in the winter, or dehydration year-round.

In the car, Arrelano explained that their work in the desert wasn’t aiding and abetting, though sometimes it could seem close enough to put them at risk. In Tucson, a volunteer for a similar group, No More Deaths, faced felony charges for allegedly providing assistance to migrants trying to cross the Sonoran Desert. In July 2019, a jury refused to convict him. “I do not know what the government has hoped to accomplish here,” the man told news cameras afterward. “I do know what the effect of all this has been and will continue to be: a raising of public consciousness, a greater awareness of the humanitarian crisis in the borderland, more volunteers who want to stand in solidarity with migrants, local residents stiffened in their resistance to border walls and the militarization of our communities, and a flood of water into the desert at a time when it is most needed.”

The morning started to heat up. Cordero pulled over for gas. As far as he knew, he said, no one had died in their patch since Border Angels started its watch in the late 1990s. During the same period, estimates suggested thousands of people had died while trying to cross into the United States. Around the gas station, the landscape was moonlike, vastly empty. Signs of civilization were a few truckers, some litter blowing around. Cordero pointed into the distance. Out in the desert stood an isolated segment of America’s barrier-in-progress. It looked like a red brick wall, maybe a quarter mile long, a stockade in the middle of nowhere, disconnected. As if an enormous child had started to build something out of Lego and abruptly stopped.

That weekend, some miles away, a “caravan” of several thousand people from Central America had arrived in Tijuana, seeking admission into California. The president of the United States had labeled them “stone-cold criminals” and falsely suggested that their expedition was funded by a Jewish billionaire. At the direction of the White House, thousands of active-duty troops had been deployed, authorized to use lethal force. Meanwhile, planning documents obtained by Newsweek suggested that the U.S. military was more worried about the threat from the other side of the border. In a Washington Post interview, the president of the Texas Minutemen said, “We’ve proved ourselves before, and we’ll prove ourselves again.”

About half an hour later, after some light off-roading, Cordero parked next to a boulder in the foothills of an isolated mountain range. It felt as if we were standing on the edge of the country, on the edge of the edge. Two cars following us parked behind, carrying about a dozen volunteers. Everyone turned off their phones’ tracking features. Suddenly a U.S. Border Patrol truck roared up the trail and stopped at twenty feet. Two agents stared at us, talking between themselves. “Where we’re going today is public land,” Cordero said loudly. He was imposing—tall, broad-shouldered, with a bushy beard. “It’s my land. It’s your land. Border patrol cannot check your identification without probable cause; that’s a right you have as an American.”

The agents reversed down the trail a moment later.

In the popular understanding—which is to say Anglo understanding, the frequently East Coast, masculine understanding that still underpinned public thought in the United States, a sense of American history more inclined toward pilgrims and cowboys than to green cards or diaries of the enslaved, the perspective of possessors and dominators who mostly had never been on the receiving end of conquest— the history of the city-state’s place in national geography was often guided by a compass with destiny’s magnet buried under the W.

Modern Los Angeles was a metropolis of émigrés, refugees, and striving hearts—the city of immigrants, a radically multipolar place of individuals from other lands.

“When I am in California,” Theodore Roosevelt said in 1905, “I am not in the West. I am west of the West.” Years later, the British painter and Los Angeles resident David Hockney would call Malibu “the edge of the Western world.” A place that had once been Native American and Mexican was now mostly talked about in whiter terms—in part because the City of Angels had been, for a while, very white, both Anglo-inclined and Anglo-worshipful, appearing to many eyes as a unipolar place that had languidly transitioned from dreamy Spanish colonialism to mighty American democracy, all tied to the evocation of “going West” that was the rally cry for so-called pioneers, i.e., making it as much a matter of fantasy as orienteering, to be claimed by any “Okies” or pensioners from Iowa. And there was no lack of examples of LA’s whites being disinclined to acknowledge nonwhites, any non-Euro-seeming.

In 1925, as recorded by William Alexander McClung in Landscapes of Desire: Anglo Mythologies of Los Angeles, the Allied Architects Association of Los Angeles endorsed a set of propositions stipulating “that the region is Mediterranean both ecologically and culturally; that its architecture and landscaping should perpetuate the ‘collective memory’ of Spain, Italy, and the south of France; that, however, the ‘seductive influence’ of those regions should merely influence, not dictate, architectural designs; that Southern California is a land of romance; but that its founding was ‘sordid,’ achieved not by Spanish aristocrats but by ‘Indians, half breeds, and negroes, conscripts and undesirables.’” Such whitewashing even had its own term, Spanish fantasy past, suggesting a land found west of the Mediterranean, not north of the equator or east of the Pacific. As Joan Didion wrote in “Notes from a Native Daughter,” “It is characteristic of Californians to speak grandly of the past as if it had simultaneously begun, tabula rasa, and reached a happy ending on the day the wagons started west.”

And yet the city-state would not be so colonized. Modern Los Angeles was a metropolis of émigrés, refugees, and striving hearts—the city of immigrants, a radically multipolar place of individuals from other lands. “Their arrival changed it from a small and little known city of fifty thousand people into the largest and most renowned of Pacific coast centers” (Robert Fogelson, Fragmented Metropolis). “Era un gran pueblo magnético . . . era un gran tiempo de hibridos” (Rockdrigo Gonázalez, “Tiempo de Hibridos”). Really, the saga of the city-state was better imagined from other directions, principally as a northerly place, for people arriving from places south, where Los Angeles was the hemisphere’s northernmost Spanish-speaking megalopolis, a sprawling basin of plazas and churches, with a climate familiar to people from El Salvador, Guatemala, or Honduras, for whom California was always el norte. “Los Angeles is  for the American Southwest and Mexico’s northern third what Mexico City is to the southern and central regions of Mexico proper,” Lester Langley wrote in Mexamerica: Two Countries, One Future. During a roundtable discussion, the journalist Carolina Miranda once said, “It was never the last stop. It was the first. It was the beginning.” In Luis J. Rodríguez’s memoir Always Running: La Vida Loca: Gang Days in LA, his father tells his mother, “I’ll never go back to Mexico. I’d rather starve here. You want to stay with me, it has to be in Los Angeles. Otherwise, go.”

None of this should omit the LA that was a locus for people headed east, voyagers from the Philippines, Thailand, Japan, Korea, Bangladesh, China, and more; people who also weren’t privileged in official storytelling as the Spaniards and white Americans were. And that’s not to forget any Russians, Iranians, Samoans, Ethiopians, or Armenians; not to forget, though we had forgotten, the people who were here previously, the Tongva, the Chumash, approximately sixty thousand Native people who lived in coastal California when Spanish colonization began in the 1770s—a population that, according to John Mack Faragher’s Eternity Street: Violence and Justice in Frontier Los Angeles, fell by nearly two-thirds within fifty years.

People for whose ancestors the mission bells that now decorated California’s highways—artifacts from an imaginary Spanish heritage—might plausibly toll, We invaded, we enslaved, we destroyed.

The point being, to get a feeling of where the borders of the city-state were located, where they existed in space and time—historically, presently, outside of time as well, despite all the efforts at cultural cryogenics—it felt important to start a hundred and fifty miles south of Downtown, in the wilderness. 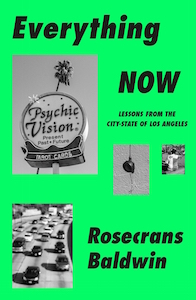 Rosecrans Baldwin is the author of The Last Kid Left, You Lost Me There and Paris, I Love You but You're Bringing Me Down. He lives in Los Angeles. 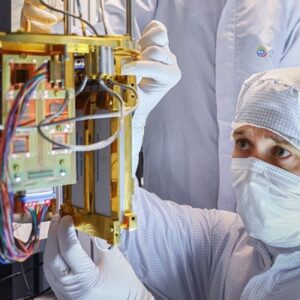