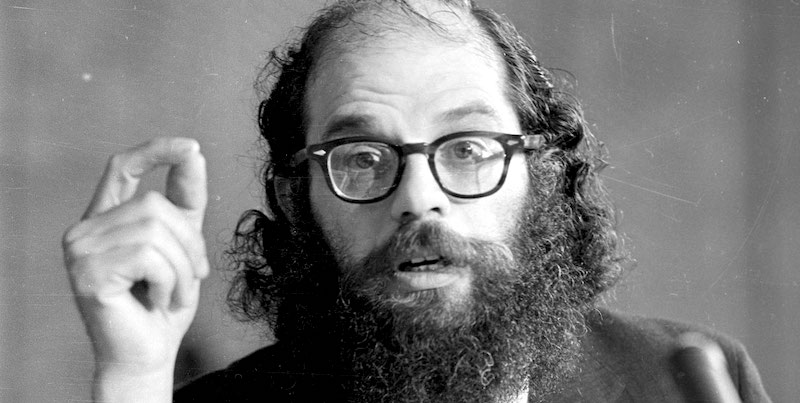 "To be a Chicanao poet is to be dealing with the
politics of identity as irony."

We might as well begin with “beyond.” Really I know that my roots come out of the Beat movement. My roots come out of there in the way that all of our roots are intertwined, there, not so much in New York but in San Francisco, where I was born, in the Mission District. I grew up in San Jose, California, in a place that was incredibly liberating in that—what? what’s poetry from San Jose? It defied definition; it wasn’t a school, it wasn’t a certain way of writing. It was this incredible freedom to do and sound like anything you want. To me this idea, this linking to the Beats is much like the use of one of those Tibetan meditation gongs that you take up to the top of the mountain, you sound it like you sound this poetry. Not that I write like that, or anyone else writes like each other; but instead this tone dissolves the language and you travel out on it. You send your soul out in this thing, this gong. So this is how I connect my coming out of the Beat movement.

As I said in terms of how our roots are intertwined, I am a Chicana poet, I’m an indigenous American, I’m a California native from Santa Barbara, from the Chumash nation, and the Californios. Whenever anyone asks me “what part of Mexico are you from?” I always answer “California.”

One thing that I want to bring up is how so many Mexican and Latin American poets and Latino poets had influenced what was going on, particularly in San Francisco. Margaret Randall and Sergio Mondragon were editing, along with others, a magazine that was trilingual, English, Spanish, and Portuguese, called El Corno Emplumado. My first book was called Emplumada. El Corno Emplumado is sort of like The Feathered Horn, corno is like a horn but it’s also like cornucopia. This was where the first poetry of Pablo Neruda, César Vallejo, and of course Paz and others, García Lorca translations, were published. It had an incredible influence, there’s always been this connection between the Latin American sensibility or what Robert Bly called Spanish leaping poetry and what was coming out of some of these writers. There’s a connection between writers like Kerouac and Ginsberg and Duncan and others that come out of these poles, beginning with Rubén Dario and reaching to Roque Dalton, a poet from El Salvador, from César Vallejo to Fernando Pessoa, from Pablo Neruda to Borges, from Paz to Ernesto Cardenal, from Nicanor Parra to García Lorca.

Also there were what I call the Second Wave Beats: the women who began publishing after. I can remember hearing Anne Waldman come to Berkeley, to the poetry festival, and reading that incredible woman poem, “Fast Speaking Woman,” that’s a take-o! again from María Sabina, a Mexican shaman-poet; again that interconnection, that indigenous and Spanish leaping. There are poets as well like Diane di Prima, Joanne Kyger, Diane Wakoski, who’s often not talked about in terms of the Beats but was very much a part of that early movement, more in New York than in San Francisco—being born in San Francisco, I used to say the San Francisco poets are really New York poets—Wakoski was one of the ones who grew up in California and ended up in New York; and also feminist poets like Alta and her small press and the sorts of poetry being published at that time. There’s a direct lineage that I see, that I come out of through my poetry, again as a Chicana poet, as I identify myself, as a Chicanao poet—I like to dissolve that gender distinction, chicana/chicano poetry, so Chicanao, let’s turn it into Portuguese—that finds itself somehow wedged between Howl and Reality Sandwiches.

When I first discovered the poetry of Allen Ginsberg, my first thought was “at last, here it is, Chicano poetry.”

When I first discovered the poetry of Allen Ginsberg, my first thought was “at last, here it is, Chicano poetry.” Now what I mean by that is, consider the aesthetic, consider the poetics of Ginsberg. First of all there’s the notion of suffering, the acceptance of suffering or, as one of my favorite philosophers, Rickie Lee Jones, used to say, “you don’t have to suffer to create art, you will suffer (period).” And there is, as was quoted earlier, the sense of no self but in other selves, for to be a Chicanao poet is to be dealing with the politics of identity as irony. No self but in other selves. No multiples selves, no individual self, no universal self. It’s a very Chicano sensibility, to know that you are in the intersection or are sometimes the target of all of these multiple subjectivizations, which is beyond stereotype.

Also there is an attention to minute particulars that you find in this poetry, which comes out of William Carlos Williams, another Chicano poet. His mother was Puerto Rican, his first language was Spanish, hearing the crooning of his mother—very interesting when he writes about that. To me he’s Chicano. There’s the sense of the line as a breath unit, which is the legacy of Allen Ginsberg via William Carlos Williams, again via these indigenous Latino sensibilities. The line as a breath unit, form in poetry being pure rhythm. And certainly in Reality Sandwiches there’s this denouncing of American bourgeois values—very Chicano. Ginsberg is the first American pachuco. There’s also the technique of listing, the intricate cataloging of the everyday, of things as they present themselves. This goes along with what [Edward] Sanders has talked about, this questioning of Ginsberg’s, these constant questions along with this cataloging. It’s not just cataloging for the sake of cataloging, but a strategy of multiplying the conditions of possibility in order to break out of oppression, to break the tyranny, including the tyranny of a single idea. This rejection of the abstract and symbolic.

I go back again to that Robert Bly essay on Spanish leaping, where he contrasts it with French Surrealism and French Symbolism. There’s a rejection of that in favor of presenting life, presenting material as it has presented itself—this is the sort of thing you find in Pablo Neruda’s Elemental Odes. Also there’s this technique, this strategy of what I call the rasquache poetic. Rasquache is—for example, I was a small press person. I printed a magazine out of my kitchen, published the first books of Gary Soto, Sandra Cisneros, Jimmy Santiago Baca, Alberto Ríos, Ray Gonzales, all of the early Chicana/Chicano writers. But I did it out of my kitchen on a little multilith press, which is sort of a pre-offset press. And it came out all smudgy pages and everything. But there was this explosion of this sort of literature being published and it didn’t matter, it was anti-slick, it was the anti-aesthetic, you work with what you have, and you make good with what you have, you make it damn good, even though it looks rasquache. “Yeah, yeah, my shoes are all scuffed and everything, but man, I have style when I walk.” This is the rasquache sensibility. And this is the sort of poetic you find in writers like Ginsberg, like Kerouac, and others. This is how I was reading them, as Chicanao poets.

A very interesting connection is the voice of the Bible that you find in Ginsberg, in particular in “Howl.” Of course it’s from another angle, coming out of a Jewish tradition in “Kaddish” and all of that, but it’s that voice that so permeates Chicanao writing and Latino writing today, that influence from the other end, from Catholicism. And there’s a recognition of the division or rather, finding a creative resolution to the supposed opposition of the spiritual versus the profane world. This is all tied up in that poetic aesthetic of rasquache as well as, again, that attention to minute particulars, all the dirty little details of daily life that you can raise to the level of poetry. The work in particular of Ginsberg is a poetry that’s stripped of artifice, so that it becomes spoken word. Again, back to that idea of the line not just as a breath unit, but spoken word and how it moves into beyond—there’s very much a connection between Beat poetry and Chicano and what we used to call Third World poetry back then and now the spoken word movement, to take it off the page, to take poetry off the intimidation of the book. This is certainly something Chicanao poets have always dealt with and experienced.

To be a Chicanao poet is to be dealing with the politics of identity as irony. No self but in other selves. No multiples selves, no individual self, no universal self.

There’s also the fact that Beat poetry is what I’ve always considered “bomb poetry,” coming out of that sense, as Ginsberg said, of poets confronting the destruction of the entire world. As he said, no other poets have ever experienced that. I have to say, we have to consider the conquest, and this sense of Chicanismo, of being conquered by the sword and the book, had become universalized, globalized, through globalized threat, beginning with the atomic bomb, now with extreme ecological destruction, the destruction of our entire world. And how do you create poetry out of that, how do you write about that? How do you not write about that? All of these things are very much connected to the Chicanao sensibility. Also there are the Buddhist tenets, or non-tenets I guess I should say, which to me are indigenous, indigenous American, that I see and draw from my indigenous side. This erasure of self, of the self and other split, and this notion of poetry and the body being in service to others. Going from the body into the body politic, through the magic of spirit inspiration. Poetry, breath—back to breath, spirit, etymologically has to do with breath, inspiration. This is the magic of poetry.

And there is the reliance upon jazz and the African-American aesthetic, through poets like Amiri Baraka (who was LeRoi Jones then, and in the Bay Area) and in particular Bob Kaufman. This book of Bob Kaufman’s just came out a couple years ago, Cranial Guitar. He’s a very underrated poet; if you do not know Bob Kaufman, pick up this book. This is the poetry that I was exposed to growing up in California. 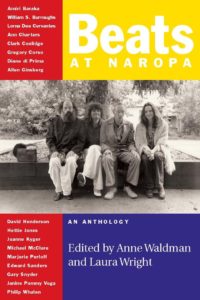 Lorna Dee Cervantes is the author of Emplumada, From the Cables of Gencide, Ciento, Drive, and Sueno. Awarded NEA grants, Pushcart Prizes, a Lila Wallace, state arts and best book awards, Cervantes is founder of MANGO Publications (first to publish Sandra Cisneros), and has presented at the Library of Congress, Dodge Poetry Festival, Walker Art Center, and Nuyorican Poets Cafe. She writes in Seattle. 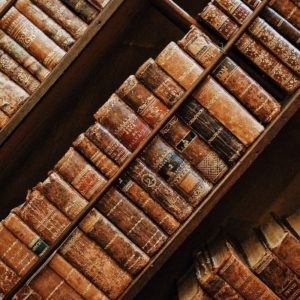