On Fighting For a New Society

The terrible disaster that struck Beirut and plunged Lebanon into mourning happened at a moment when the country was already facing one of the darkest moments in its history, worse than the one it experienced during the fifteen-year civil war. Thirty years have passed since this tragedy, and yet the ills that caused it have not been remedied. On the contrary, they have worsened due, on the one hand, to the foreign interference of regional or great powers and, on the other hand, to the monopolization of power by confessional leaders who have always taken the country to be one of the spoils of war.

On October 17, 2019, Lebanese people launched a unique protest movement, unprecedented in the contemporary history of the country. This movement succeeded in transcending confessional, ideological, regionalist, and partisan divides. Tens of thousands of protestors, with the youth at the helm, forcefully expressed the need for radical change in political mores and for an end to the squandering of public funds. They also demanded the sidelining of the despised ruling class that subjected the country to permanent tension, enmeshed it in external conflicts, and slimmed-down the state, rendering it incapable of even carrying out elementary tasks, such as water and electricity distribution and garbage collection.

In the wake of this protest movement, a National Salvation Charter has been recently made public. A large number of social activists, writers, and intellectuals rallied around this document calling for the reorganization of the political landscape and the creation of a vast coalition. The latter would be in charge of establishing a democratic rule of law that guarantees the principles of equality and social justice. With the collapse of the economic system, the withholding by the banks of depositors’ money, the decline of the social and cultural situation, and the onset of food shortage, Lebanon is not only on the edge of the abyss but also threatened in its very existence.

The collapse of Lebanon will undoubtedly have serious consequences throughout the Middle East. It will be the fall of the last bastion of pluralism, diversity, and openness in the region. It will also sound the end of Lebanon’s role as a bridge between East and West, and as the lungs that allowed culture and the idea of ​​democracy to breathe in the Arab world. The Lebanon of creation that championed the freedom of expression and rejected obscurantism and monolithic thought, this Lebanon which is resolutely committed to the project of modernity and has put itself in a position to engage on an equal footing with other cultures, this enlightened Lebanon is now threatened with death. Its disappearance would mean the extension of the area of ​​intolerance, oppression, terror, and uncontrollable sectarian impulses.

We, Lebanese people and, throughout the world, those who love Lebanon, hereby affirm our refusal to resign ourselves to such a loss. Today we pay tribute to all the victims of the disaster of August 4 and join their families in their mourning. And in order for life to have the final word, we express our total support for the civil society movement that will continue to fight for a new Lebanon in which it will once again be possible to establish a true rule of law, freed from the confessional straitjacket, ensuring for everyone the rights and freedoms of a full-fledged citizenship.

This text was initiated by writers Abdellatif Laâbi and Issa Makhlouf and first published in French by L’Orient Le Jour. The current English translation is by scholars Karim El Taki and Khalid Lyamlahy. The original text has already gathered the support of about 150 artists and intellectuals from all over the world, and is still open to receive signatures at the following email: sosliban1@gmail.com (signatories are kindly asked to mention their full names, occupations, and nationalities).

Letter From Beirut: After Grief, There is Rage 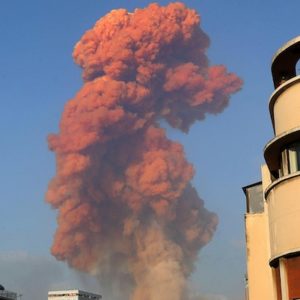