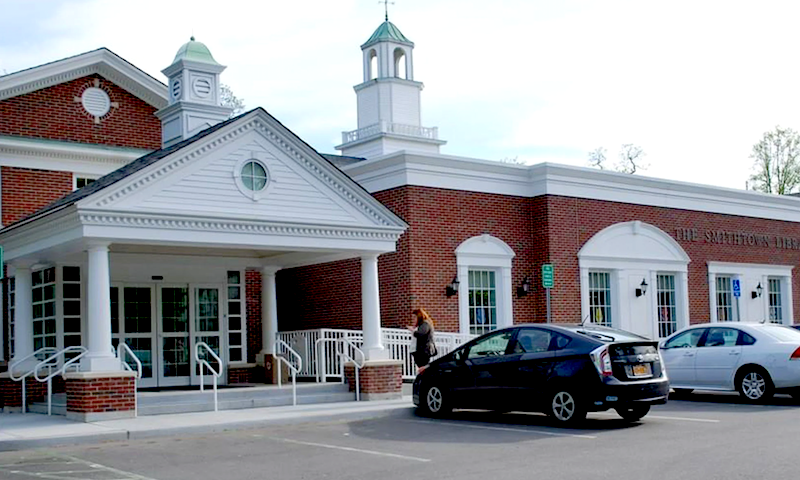 Long Island library board comes to its senses and reverses ban on children’s Pride displays.

Following the recent onslaught of attacks on LGBTQ+ rights across the nation, the Smithtown Library Board of Trustees passed a resolution on June 21st to remove all Pride month displays from their children’s sections across all four buildings in the library’s district. The New York Library Association was quick to release a statement following the meeting calling the decision, “a direct violation of NYLA’s commitment to intellectual freedom and the freedom to read that libraries are entrusted to uphold.”

Governor Kathy Hochul took to Twitter to share in the outrage stating, “For many LGBTQ+ kids, libraries are one of the few spaces where they can be welcomed and affirmed for who they are. Our public spaces should be accepting our young people – not rejecting them. To LGBTQ+ New Yorkers: We stand with you, & you are welcomed here.”

On Thursday I drove to the Smithtown Library, just fifteen minutes from where I grew up on Long Island, to speak to Library Director Robert Lusak who oversees all four libraries in the district. We walked together into the children’s section where Lusak showed me the empty window sill where a children’s Pride display was removed after Tuesday’s Board Meeting. “The books were removed from the display and they were put back on the shelves, they were not removed from the room altogether,” Lusak told me.

“What prompted this resolution?” I asked him.

The Library Director hesitated before answering in a hushed voice, “I can tell you that a [unnamed] Board member asked to have the topic of displays on the agenda. They had the discussion and voted on it.” He continued, “They are holding an emergency meeting tonight to discuss the decision that had been voted on Tuesday night because of concerns made by people in the town.”

Some of the books removed from the display were “Pink is for Boys” and “Pride Puppy.” Also featured in the display was a history of the AIDS Memorial Quilt.

As Director Lusak and I made our way through the library I noted that the Pride displays in other sections remained intact. How long would it be before these other displays were removed as well?

For years the Right has been persistent in its attempt to label gay and trans people a danger to children, an effort that has resulted in recent homophobic legislation in Florida and Texas. Lawmakers in Texas have even gone as far as to suggest it be illegal for children to watch or attend drag shows. The Board’s emergency meeting—which comes in light of a steady and forceful pushback from LGBTQ+ activists across the nation and members of the Smithtown community—has created an unusual amount of media attention, none of it particularly wanted (judging by the palpable tension of the library’s staff, and its director)

The resolution Tuesday night also caught the attention of best-selling author and former employee of Smithtown Library, Jodi Picoult who took to Twitter to slam the Smithtown Library Board stating, “I’m disguised by the trustees who voted for this. Libraries are for all & representation matters. Smithtown folks, how do you feel about being a place where books are banned? What’s next?”

After speaking with the director, I ran into Dina Klansky, a mother of two from Smithtown, in the library parking lot, and asked her about the controversy. “I’ve been thinking about it all morning,” she told me. “What about the children of LGBTQ+ parents? These [books] are resources for the whole family. They show children that we can live in an inclusive world. Why are you trying to take that away? Let Smithtown Library be an example we can be proud of not a place that closes off and divides.”

Though not all parents in Smithtown disagreed with the Board’s initial decision. “I think it was a great decision,” Stacy Lambros told me while she unloaded her kid’s bike from the back of her truck. “I think it’s up to parents to educate their children. I don’t think it’s a homophobic thing at all. You take the right away from the parents to communicate to their kids when you put it all out there like that.”

More than 1,000 community members and national activists attended Thursday night’s virtual emergency meeting, exceeding the Zoom limit. The Board of Trustees voted in a 4-2 margin to reverse the original resolution and allow Pride displays in the children’s section until July 15th when the librarians can then decide what becomes of the display.