Living With A Dead Language 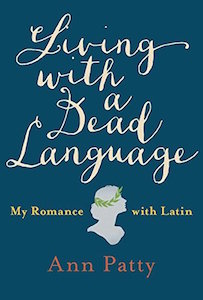 The following is from Ann Patty’s book, Living With A Dead Language. Ann Patty worked in New York trade publishing for more than thirty years. She was the founder and publisher of The Poseidon Press and an executive editor at Crown Publishers and Harcourt. She lives in Rhinebeck, New York.

I tapped out the meter with my right foot as I drove on cruise control to Poughkeepsie the next morning. It was a difficult syncopation, but finally I had it. I was thrilled to have memo­rized Catullus V. I knew if I wanted to keep it in memory, I needed to constantly repeat it aloud, and over the next few weeks, like a proud child with an esoteric piece of knowledge, I would recite it to anyone who would listen. Alas, few would. I seldom made it past the fourth line before I was told, “ENOUGH!” This was, as my friend Stephanie had earlier warned, a private passion, even though Catullus V was a classic love poem in every sense of the word.

On Monday, I arrived at class ready to stand up and recite. Much to my disappointment, Matthew never asked us to do so. Instead he presented all the Catullan nouns for kisses (in order of increasing passion: basiationes, basium, osculum, suavium—the first a “little kissification,” a locution invented by Catullus himself). By the time we had studied four other Lesbia poems, and witnessed Catullus both passionately enamored and abjectly brokenhearted, we had thoroughly studied the verb “to kiss”: basio, basiare, basiavi, basiatum, in all its tenses and moods. Lesbia basianda est! (Lesbia must be kissed!) is a pas­sive periphrastic. Who could imagine kissing could be used to review verb forms?

The following week we translated Catullus I, the dedication  poem, and the famous passer poems, Catullus II and III, all  about Lesbia’s pet passer (sparrow). There has been much  scholarly disagreement about the true meaning of these poems.  In the Renaissance, a scholar named Poliziano put forward the  theory that this little bird that frolics on Catullus’ beloved  Lesbia’s lap and calms her deep passion (gravis ardor) is a sly  metaphor for the male member—sparrows being more than  uncommon house pets, and the word “sparrow” in Greek being slang for penis. His theory is buttressed by the last two lines: tecum ludere sicut ipsa possem / et tristis animi levare  curas! (if only I could play with you as she does, and calm the  sad cares of my mind), and by a poem, written by Martial a  century and a half later, about his slave boy Stella, “My Stella’s  pet Dove . . . has surpassed Catullus’ sparrow. My Stella is  greater than your Catullus by as much as a dove is greater than a sparrow.” And in another poem, “Give me kisses, Catullan kisses. If they shall be as many as he said, I will give you Catul­lus’ Sparrow.”

In Poliziano’s reading, Catullus II is a complaint that mas­turbation cannot satisfy Catullus the way Lesbia does, and Catullus III, a lament that his member has failed him, and Lesbia is in a weeping tizzy about it.

The theory went out of favor for centuries, until it was revived in the libertine 1970s and began raging anew, produc­ing dozens of scholarly articles. In our class discussion of the sparrow poems, I was the only one to come down decisively in favor of the penis interpretation. “It’s sure a lot more fun. And that it’s not a pure one­to­one correspondence makes it sly and witty fun,” I said. In a moment, I felt my young class­ mates’ eyes turn to me. Perhaps it had dawned on them at last that rather than a senex severa (a stern elder, such as was fea­tured in Catullus V), I was an emissary from the sexual revolu­tion of the sixties and seventies. It seemed, indeed, that we elders, Matthew and I, might be the only lively persons in the class!

That evening I was inspired. George and I had been in one of those arid troughs filled with criticism and alienation. I began telling him about Catullus II and the sparrow, whom Lesbia pokes provocatively, and holds to her breast, and knows so intimately. I read the poem aloud in Latin, then translated it for him. Though he loved it when I read him poetry, he’d endured plenty of my set­piece narratives about Latin, and I could tell this rendition was not winning the forgiveness for last night’s outburst I was seeking. Finally I told him, “The interesting thing is, lots of people think the sparrow is a met­aphor for the penis.” There followed one of our most lively discussions ever about a poem. Catullus and his passer, qualecumque (such as it is)—a word from Catullus I—led us into a  night of delectatio amoris, and luckily I never got the chance  to tell him about the lament of Catullus III.

From LIVING WITH A DEAD LANGUAGE: My Romance with Latin by Ann Patty, published by Viking, an imprint of Penguin Publishing Group, a division of Penguin Random House LLC. Copyright © 2016 by Ann Patty. 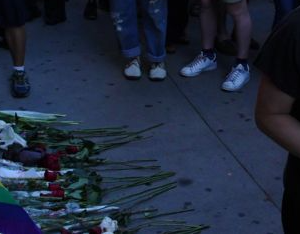 ALL THE DEAD BOYS LOOK LIKE ME This heartbreaking new poem by Loma, written in the aftermath of Orlando, fuses love and outrage into a refusal of violence...
© LitHub
Back to top