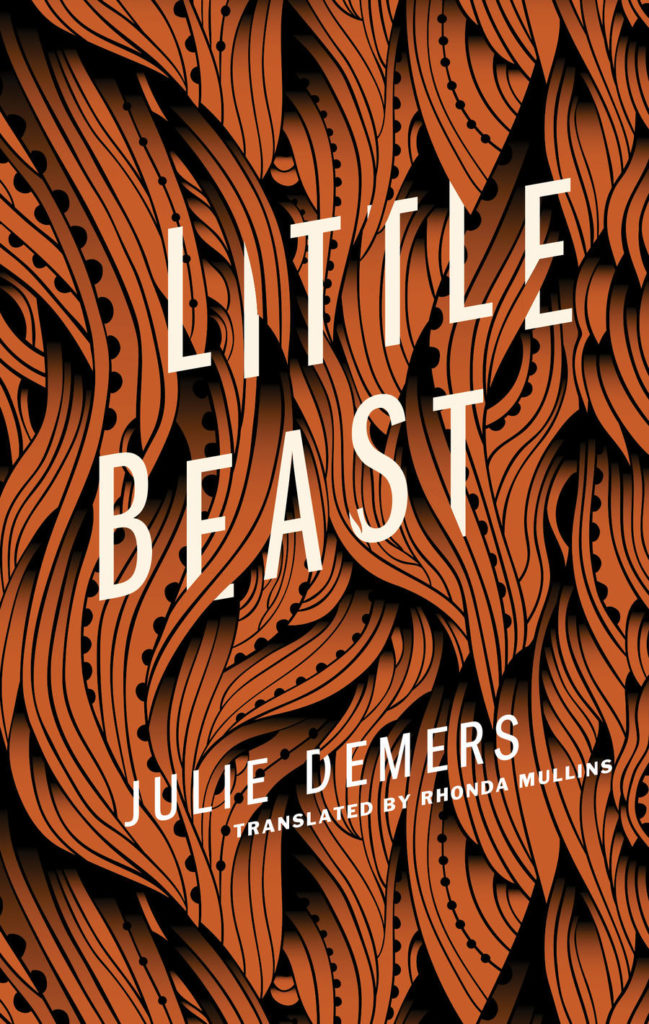 The following is from Julie Demers's novel, Little Beast. After a young girl grows a beard, her father vanishes and her mother locks her up in the house. Set in a small village in Quebec, her mother only wants to keep her daughter safe from the rural townspeople, the Boots. This is Julie Demers's first novel.

‘You’re not a monster,’ Mother used to say. ‘Just a little beast.’

For Mother, even though I was becoming a woman, I was still slender, something that can be caressed but that shouldn’t be caressed. The more my little face grew, the more Mother turned her breasts away from it. My ﬁrst weeks, she cried like a baby, but she quickly learned to deal with my distinctive feature. She spent hours touching my chin, my hair, pressing her nose into my beard. In her mother’s voice, she would whisper that I must never leave the house. That the people outside wouldn’t understand. That, at best, they would understand only later.

So there was nothing to be done but to stay indoors, quiet and watchful. Nothing was supposed to change, and nothing did. I would leave my bedroom at night, only at night, at the same time as the ﬂying ﬁsh. I would crawl through the dormer window and, like them, emerge in the light of the moon.

But my adventures and misadventures never went very far. My victims were hardly worthy of the name. While everyone slept, I would sneak into cottages and move things around. Sometimes, just sometimes, driven by the desire for real adventure, I wouldn’t put things back where they belonged before dawn. A mackerel would appear on the shoemaker’s counter. The seamstress would have to bend over and pick up her rosary. The lumberjacks would have to go to the living room for their gin. Yes, they were serious crimes, but they would be forgotten soon enough. Mother no longer slept at night. She would stay up reading unreadable books, which she kept under lock and key in a dresser in the living room. One night, I hid in the wardrobe to watch her. She read out loud, and the words told of even more serious crimes than the ones reported on the radio. The next morning, I opened my French notebook and the dictionary for the ﬁrst time. The day after that, I opened the bible.

I liked the bible. I liked it because it was so thick that it seemed I would never ﬁnish it, and since I had been told that people cannot die without having read it cover to cover, I ﬁgured that I would never die if I read it slowly, eternally.

Mother had turned away from the bible: she was withering away, slowly but surely, and wouldn’t let anyone in the house anymore. Except for one night, when I must have been ten years old, when Mother oﬀered hospitality to a beggar woman. Mother felt sorry for her because of her face. Mother always felt sorry for faces.

I never saw the beggar woman’s face, but you don’t need to see a face to know that it arouses pity. Sometimes the voice is enough. Mother asked her for news of the lumberjacks and the war. The old woman told her what she knew. The rest she made up.

The next day, after she had gone, a trunk appeared in the middle of the living room. It was ﬁlled with books. Why did she leave them for us? It’s a mystery. In any event, ﬂipping through them, I discovered that I already knew just about everything: the name of the earth’s animals, the Ten Commandments, the trajectory of comets, the outcome of elections and battles in the east, the names of baseball teams. All of it had been explained to me by the bible, or by Mother, or on the radio. The rest was already inside me. There was nothing more for me to learn, or at any rate, very little.

“It didn’t matter that Mother put thicker and thicker curtains on the windows; we could still hear the voices. They got in through the ears and made their way through the skull.”

I spent the best years of my life looking through The Thermosiphon and Balloons and Air Travel, although I really enjoyed reading Apparent Death and Real Death: Assisting the Dying in Body and Spirit, the celebrated book by Dr. Desroches. Between books, I would faithfully watch mother’s daily naps, as she would often sleep in the afternoon. Dr. Desroches was the one who told me that the best way to go unnoticed is to play dead. So Mother was playing dead.

While I slowly gained conﬁdence, Mother persisted in not thinking for herself. We kept the doors and windows shut, but the humans from Rivière à Pierre kept overrunning our porch. We were invaded by their voices; they told us how it was going to be. The things I heard through the boards were about me. Things that crouch in the depths, but that resurface. Things that I force myself to forget but that are stronger than forgetting.

It started innocently enough, almost without warning: ‘You have to take her out for some fresh air. What are you feeding her? What are you teaching her?’ Then it would continue like this: ‘Is she an idiot? Do you still breastfeed her? Do you still hold her hand?’ And then, at age seven: ‘Enough childishness, lies, and foolishness. She isn’t a child anymore. She has to stop acting like a baby. Look in the mirror. Other people don’t behave like this.’

It didn’t matter that Mother put thicker and thicker curtains on the windows; we could still hear the voices. They got in through the ears and made their way through the skull. Once they got inside the head, they would make it split and crack. The nonsense would slip inside, slip so far inside it almost came back out. But it would stay in there, surviving, lying dormant within us. Nonsense is surprising at ﬁrst, but after a bit there is nothing surprising about it, and soon it makes every gesture not so innocent. I wash my hands. I scrub my nails. I brighten my complexion. I don’t yawn like I used to. I don’t sneeze like I used to. I don’t talk, I don’t laugh, I don’t play anymore. Constantly, at every moment, I put my hand in front of my mouth because putting your hand in front of your mouth is supposed to change everything.

And one day the passersby no longer stopped in front of the porch. They looked down at the ground but they still eyed us; they closed their mouths but showed their teeth. I thought we would ﬁnally get a bit of peace, but it was not to be because Mother kept opening her mouth. And it kept on. It started over, only more so: Don’t get your clothes dirty (particularly on Sunday). Watch you don’t stain them (particularly on Sunday). You have to be careful not to show your underwear (even if it’s beautiful). You have to be polite and say ‘hello’ and not ‘hi’ like a boor, say ‘excuse me’ and not ‘whoops’ like a boor. You don’t have to suﬀer to be beautiful but be beautiful to suﬀer, always write in cursive script (because it looks neater), always smile with your mouth closed (because it looks neater), always lower your eyes in front of men and be charming honest virtuous reserved timid docile. Don’t complain if there is violence at lunch. Be fresh and ready for anything and when I say anything, I mean anything.

But fear not, no no no. Our village is the best village in the world, and our world is the best world there is. But think about that for a minute. We have always lived in a village. So how can we not be favourably disposed to it? How can we not love it from the bottom of our heart? How can we not cherish it like we cherish a mother? Here’s my theory: the love we feel for Rivière à Pierre results from an emotional attachment. If you love Rivière à Pierre unconditionally, it’s because you haven’t cut the umbilical cord. I cut the cord posthaste, and now my village makes me sick. It generates deep hostility in me. I think the whole world should agree that the village leaves a bitter taste in the mouth. I will hear no further argument: the village is ugly. A new veriﬁable fact, an accepted idea as a universal truth. Yes.

The Best Ways to Read Over the Summer 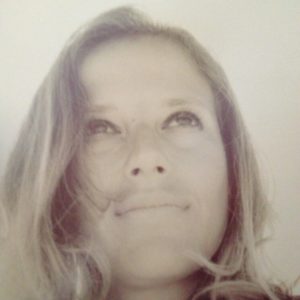