A Conversation with Julia Pistell, Rider Strong, and Tod Goldberg

Nick Drnaso’s Sabrina is the first graphic novel to be nominated for the Man Booker Prize. It’s also a beautiful and heartbreaking rendering of the contemporary American psyche and a pointed commentary on how media has allowed conspiracy and paranoia to run absolutely rampant in the absence of answers.

Join Literary Disco‘s Julia, Rider, and Tod as they discuss this very important work, along with the graphic novel’s realistic depiction of the male human body (mostly in underwear), feeling empathy for those with views unlike ours, and a brief tangent on the recent Springsteen on Broadway Netflix special.

Julia Pistell: I was so riveted by how many of these panels [in Sabrina] were about silence, especially the boyfriend [Teddy] sitting alone in a home that isn’t his and not knowing what to do with himself and deciding to listen to this conspiracy theory radio, and how little of this novel is spoken words or thoughts of the character, but just zoomed in on them, isolated.

Tod Goldberg: It touches on the isolation, desperation, malaise, and fear that the American experience has become. And also the interconnectivity that media has allowed conspiracy and paranoia run absolutely rampant in the absence of answers for something that are definitive, chaos and conspiracy always going to be the thing that certain parts of fringe society holds onto.

Rider Strong: An important part of the art is that it focuses on the body. This people are real, leading boring, banal lives, being naked and being unattractively naked and being depressed and sitting on couches … To be in the presence of another human being wearing a Snuggle is something you don’t plan on, especially something you don’t plan on reading in a comic book, right? That’s the antithesis of comic books. Comic books are supposed to make the visuals exciting, with violence if anything, sex maybe, and supposed to spice up real life and make it the most interesting read you can. This book does the exact opposite. It starts with blank faces, people getting coffee, people carrying their cats from room to room, people starting out of windows, people listening to a radio show. There are like 20 pages of a radio, just a close-up of a radio and a guy naked listening to it. That’s anti-comic book writing.

It is so profound because so much of the message of this book is these people have bodies, these people have lives, they have lovers, they have thoughts, they have friends, they have childhood friends and shitty jobs, and if you take that away from them, if you remove their personhood and physical reality, it is so easy to say they are crisis actors or they are manipulating or lying. We all as a culture, we are so easy to dismiss other human beings. I know I do it on the level of Trump voters. It’s so easy for me to think the average Trump voter as someone I don’t understand, who I have a couple images in my head and it’s out there and I don’t really think about them. And these people lead real lives and everyday experiences and their shitty jobs, and this book is such a little empathy bomb. To say whichever side in any situation, whether it’s a murder that gets politicized in this case or something you’re hearing about on the radio, there’s a human being on the other side of that experience that’s having to live that. That message, I haven’t felt that more in years than I did with this book.

Lit Hub's Most Anticipated Books of 2019

Brittany Ackerman Talks Anxiety, Addiction, and the Shiftiness of Memory 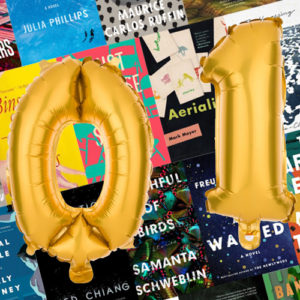 Lit Hub's Most Anticipated Books of 2019