Brittany Ackerman Talks Anxiety, Addiction, and the Shiftiness of Memory

In this episode of Otherppl with Brad Listi talks with Brittany Ackerman, author of the debut memoir The Perpetual Motion Machine (Red Hen Press). Ackerman is a graduate of Florida Atlantic University’s Master of Fine Arts program in Creative Writing. Since graduation, she has completed a residency at the Wellstone Center in the Redwoods, and has attended the Mont Blanc Workshop in Chamonix, France under the instruction of Alan Heathcock.

She recently attended the Writers by Writers Methow Valley Workshop in May of 2017 under the leadership of Ross Gay. She lives in Los Angeles.

Brad Listi: I want to ask you about remembering all this stuff. I know with a novel you have more latitude to fill the gaps with your own creations. Your memoir is riddled with specific sensory details from childhood. I guess I have my memories and I’m sure they’re better than I give them credit for sometimes but I’m forever bemoaning the fact that I have a terrible memory. You seem to remember everything.

Brittany Ackerman: I think it’s a mental problem I have. When I fight with my fiancee, he’s like, “How do you remember that from three months ago.” I don’t know, I’m cursed.

Brad Listi: Do you have an eidetic memory?

Brittany Ackerman: My brother has a photographic memory. If he sees something, he can read it word for word afterwards and for weeks after. I don’t have that. I have a really good long-term memory but really bad short-term. Like, I don’t remember what I had for breakfast, but in like a month I might remember. I don’t know how the brain works like that. I think what happened in my case is a lot of the things I went through my childhood were positive, like you said, especially the vacations we had and the lifestyle. But not only were those moments tinged with a sadness to them—sometimes, not all the time—but I think there were a lot of hard things that happened.

Brittany Ackerman: For example, and this is in the book, I remember the day when we were supposed to pack all of our stuff and move to Florida and my mom was going to say goodbye to her father. So we drove to his apartment and she was having a kind of mental breakdown with that. She turned up the music all the way and she was blasting the soundtrack from Footloose, which is kind of manic. And me and my brother are kind of like, what the hell is going on.

Brad Listi: We’re moving and mom is here singing, “Let’s Hear It For the Boys.”

Brittany Ackerman: And for a while that memory didn’t even exist for me. It wasn’t until I started drafting this book and I would show my brother drafts of it and he read it all the way through and was like, Why didn’t you put in the day that we moved? Remember the Footloose song?

Brad Listi: Which one was she blasting?

Brittany Ackerman: It was the one at the end of the movie, when they finally do the big dance scene. But yeah, he started talking about it and I was like, oh yeah, I do remember that but I blocked it out because it was so traumatizing and weird. So those kind of things came to me, but then what would happen is the memory—because I blocked it out or didn’t remember it well—it kind of came back in a technicolor way, like a cartoon almost. And it was dramatized, since it’s now my brother’s version and how he’s telling it. And I’d ask my mom about it, and she had a different version. Everyone’s version of the story is different. My version of the half-remembered tale comes out like this cartoon, a super elaborate, dramatic version of it and now that’s what I’m writing. So the memory has actually changed and becomes something different.

Brad Listi: It’s all very slippery, but there is a core of truth to it. I want to say, as I moved as a child when I was about 11 years old, but moving is traumatic. Everyone is like, death is traumatic, some sort of illness is traumatic or even an accident. But when you move, especially as a child but even as an adult, you pack up and leave your entire life, you go somewhere new. Your identity in so many respects is completely gone, because we forge our identities in the context of those that we are friends with and those that we know and no one knows you and you have to completely rebuild yourself. It’s a kind of death. 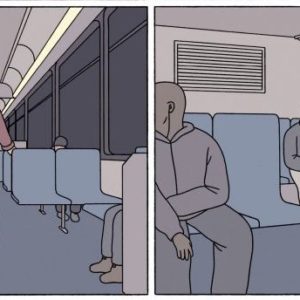 Nick Drnaso's Sabrina is the first graphic novel to be nominated for the Man Booker Prize. It's also a beautiful and heartbreaking...
© LitHub
Back to top