Sarah Elaine Smith: It’s about missing girls, rural isolation, race, accountability, growing up, and being willing to look at the parts of ourselves we’d rather hide.

Peter Orner: The comedy of grief and loss.

Peter Orner: I’m forever fascinated by how any artist—with words or visually—depicts the weirdness of memory, how memory is an untamable and independent life force.

Sarah Elaine Smith: A roaming sense of dread, true crime fandom, the heart, angels with shitty wings, mosquito bites with an X pressed onto them by your fingernails, a dirty Tweety Bird T-shirt that doesn’t fit right, rural alienation, Get Out, sparkling empty places in the woods that seem like portals, Smashing Pumpkins and Nirvana and Nina Simone, the song “Tonight You Belong to Me” on repeat, trying to scare myself.

Sarah M. Broom: Paper and jazz and novels; over-talking and loud-talking; visual art and other artist’s studios; typewritten letters and traveling (new sky); getting lost and getting found to get lost again.

Kimberly King Parsons: Lived in Dallas, Manhattan, Brooklyn, Queens, Portland. Dicked around on the Internet for a bunch of years. Had two adorable, noisy kids in rapid succession and a partner who told me to write hard—we’ll all be dead one day, why not try? He watched those adorable, noisy kids and I ran away to Montana, my childhood bedroom, Iceland, hotels a mile from our house, the Oregon outback, the Olympic Peninsula, Idaho, and twice to a little guest house in Austin. Read Nelson and Machado and Spiotta and Julavits. Read Habash and Lutz and Ondaatje and Lipsyte. Had, quite literally, a thousand phone calls with my oldest friend.

Kimberly King Parsons: I can’t bring myself to despise anybody who’s read my book, but a Goodreads woman said my characters are “unlikeable and often disgusting.” The thing is 1) she’s not altogether wrong, it’s just that screwups and weirdos happen to be my favorite people, and 2) I find her phrasing to be charming, actually. If that were a blurb on a book, I’d definitely buy it.

Peter Orner: The idea that short stories are good for a distracted society when the exact opposite is true.

Sarah M. Broom: It’s the words not used when it comes to black women writers that bother me more. But the obvious ones: gritty; raw; urban; sentimental.

Peter Orner: I’m a volunteer fire fighter. In another life I’d like to best the best Jewish professional fire fighter in New England.

Sarah Elaine Smith: I would go for physical therapist. You get to watch people visibly heal: “Look, my dude can raise his arm all the way above his head now!” Sounds excellent to me.

Kimberly King Parsons: Hand surgeon. I don’t know, I just like hands—I want to get in there and mess around.

Sarah Elaine Smith: I lean pretty hard on metaphor as a vehicle for characterization. I also think I’m pretty good at naming characters! I love writing interiority, reflection, inner life stuff. But I have to poke myself to put actual scenes in there.

James Gregor: I like to think I’m good at dialogue and descriptive passages. An intricate plot is not my strong suit.

Peter Orner: I try not to think too directly about craft elements as independent things since it is all, for me, about story and how elements interconnect in a way that, with hope, nobody notices the craft.

Kimberly King Parsons: I’m good with voice, dialogue, compression, leaving out the right things. In stories, I love working from sentence to sentence, not knowing what will come next, but that’s tricky to maintain in a long project. I’m incapable of planning, outlining, structuring. I’m also inherently lazy—I have to lie and bribe and force myself to write, every single time. For every hour of productivity there are two spent watching Drag Race or playing music or reading books better than the one I’m struggling to write.

Sarah M. Broom: Great at building feeling through the use of arresting detail. Want to get better at every aspect of writing, which includes taking more risks on the page.

Kimberly King Parsons: The stories people tell have saved me over and over again. I carry Amy Hempel’s words around in the folds of my brain. Jack Gilbert, Lydia Davis. But I’m equally compelled by what the Lyft driver or the deli guy said, or something I overheard in an airport. I’m infinitely interested in lives, voices—the odd singularity of experience. Is it so outlandish to think my take might be worth something too?

Sarah Elaine Smith: I try to write with the awareness that a person could be doing anything else but read this book. But, I also think everyone has something worth saying.

Peter Orner: In a world made up, essentially, of jibber jabber, with everybody talking past each other, I like to think every voice—especially the fictional voices we make up—somehow makes the experience of living a little less lonely. Is this too optimistic? Does it even make sense? What I mean is individual voices, small voices, voices murmuring from the corners, are everything. Why only let the dominant voices speak for human beings?

James Gregor: I pretend it’s a Flaubertian exercise in finding the perfect word for a sentence. I don’t think of it as me saying anything about a particular topic, but rather that I’m tinkering with something private, that it’s a Lego-like process and I’m simply fastening pieces—words, sentences, paragraphs, chapters—together to form a structure.

Sarah M. Broom: I remember the women who have come before me, who compose me, how vital and often disappeared their voices are from the American “scene.” Then I write more.

Why Mira Jacob Keeps Coming Back to Toni Morrison's Sula

The Road to Oliver Sacks' 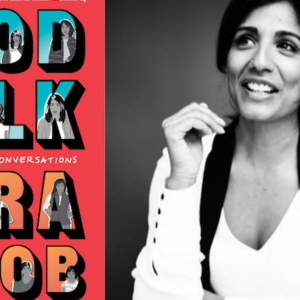 Why Mira Jacob Keeps Coming Back to Toni Morrison's Sula

Mira Jacob is in the Damn Library with Christopher and Drew, to discuss her new graphic memoir Good Talk. It’s the night...
© LitHub
Back to top