William Deresiewicz (The Death of the Artist: How Creators Are Struggling to Survive in the Age of Billionaires and Big Tech)

Raven Leilani: Sitting between another woman’s knees as she does your hair. Yellow paint, when it was made with cow urine instead of nickel. Dopamine. Voyeurism. Irritable bowels.

Héctor Tobar: Empire. Resistance. Seduction. A boy collecting butterflies. Women guerrilla fighters carrying assault rifles. An Illinois college town. A church in El Salvador filled with children, surrounded by murderous soldiers. Traveling the world as an American when it was still cool to be an American.

Iris Martin Cohen: I’m from New Orleans and a lot of this book is about my hometown. I’m fascinated by the things we inherit, for better or worse, from the places and people we grow up with. It’s about a young woman making mistakes with men and booze and the lengths a person will go to avoid seeing what’s right in front of them. It’s also about friendship and the inescapable, corrosive effects of white supremacy even in the most intimate relationships. And dogs, I love to write about dogs.

Héctor Tobar: My illiterate grandmother. My ambitious immigrant father. The feminists I went to college with in the 1980s. The lists of favorite books my colleagues passed around when I worked in a newsroom.

William Deresiewicz: A conversation I had with an old student. A teacher I had in 1987. A lifetime of listening to interview programs. Every work of art I’ve ever experienced.

Iris Martin Cohen: Film noir was a big influence for structure and tone, I’ve got a real weakness for a lone, flawed protagonist on a journey through the seedy side of a city at night on the way to some kind of truth or revelation. Tom Waits songs, punk rock, burlesque, dive bars, the glamor and sadness of a certain kind of nightlife world, but every story is basically the Odyssey. The last words of my book are “home again,” that eternal destination.

Jessica Gross: Phone calls to friends to talk about feelings. So many phone calls, so many feelings.

Iris Martin Cohen: Self-absorbed. It’s amazing how irritated people get by selfish female characters and their determination to conflate it with a female author.

William Deresiewicz: “Intemperate.” “Diatribe.” “Grooming himself to be a thought leader.”

Jessica Gross: This is my debut, so none… YET.

Héctor Tobar: “Latino fiction.” I don’t mind either of those words separately. But when used together, to describe my books, I feel segregated, unseen.

Raven Leilani: A cartoonist, or a music supervisor for the kind of adult TV drama where you might occasionally see a character on the toilet.

Héctor Tobar: Linguist. “Arrival” is a favorite movie because the hero is a linguistics professor.

Iris Martin Cohen: I wish I had the moral fortitude and resilience to be a public defender. I have so much admiration for people that do the work to chip away at injustice on a daily, grinding, exhausting level like that. In a totally different vein, I also sometimes fantasize about being a dog groomer.

William Deresiewicz: What makes you think I chose this one?

Iris Martin Cohen: I think description and dialogue are what I am best at, unlocking the hidden emotional currents of a place or conversation, but I wish I could write big, ambitious, complicated plots.

Héctor Tobar: I love describing settings: a room, a crop-covered plain, a city. I have fun with character and plot too. But physical descriptions of people (especially faces) are something I continue to struggle with.

William Deresiewicz: I’m good at driving the prose forward: writing with energy and concision, devising pithy formulations, going in for the kill. A friend of mine once said that I write like I’m beating someone up in an alley, which I thought was one of the nicest things that anyone has ever said about me. I’m hopeless with anything that I would call creative: narration, similes and other figurative language, descriptions of anything other than art.

Raven Leilani: I feel most confident about the sentence level, about language, but I have less of a grasp on delivering information stealthily, or in a way that doesn’t feel expository. First person was one of my ways around this.

Jessica Gross: I’m good at deep first person—immersion in the psyche and voice of a single narrator. My third-person skills need work.

Jessica Gross: No one has to read what I write; it’s an offering, not a demand.

Héctor Tobar: My novels are usually about people very different from me. This allows me to think of those books as “selfless” acts honoring others, when, in fact, they’re really about me trying to master language and prove myself a worthy human being.

Iris Martin Cohen: Why are you voicing my worst nightmare out loud? I think this all the time. My only rationalization is that I have such a visceral need for books in my life and every time I read a novel that I love I feel so grateful that the author went through the enormous, arduous, embarrassing effort of putting it out in to the world. So, I grit my teeth and try to do the same.

Raven Leilani: I’m working on it! I think if you make something that is clearly intended to be seen, it ceases to be a casual act. It becomes more overtly earnest and more nakedly manipulative, which is embarrassing. But I leaned into that. I wrote what I wanted to write, but I wrote knowing the sustained attention of a reader is not a given, that there had to be more than my ego, and so a deliberate bid in the craft and structure to keep them with me.

William Deresiewicz: I’m the youngest in my family, by a good bit. No one ever wanted to hear what I had to say. Writing as well as I can is my weapon against insignificance.

The Beggars of Beirut 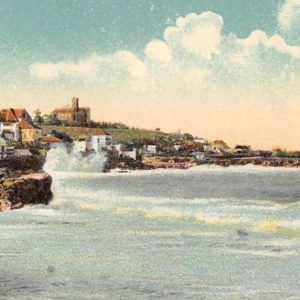 The Beggars of Beirut

scroll through dumpsters like daily digital feeds, translating trash to dinner. This auntie doles out packages of napkins, searching...
© LitHub
Back to top