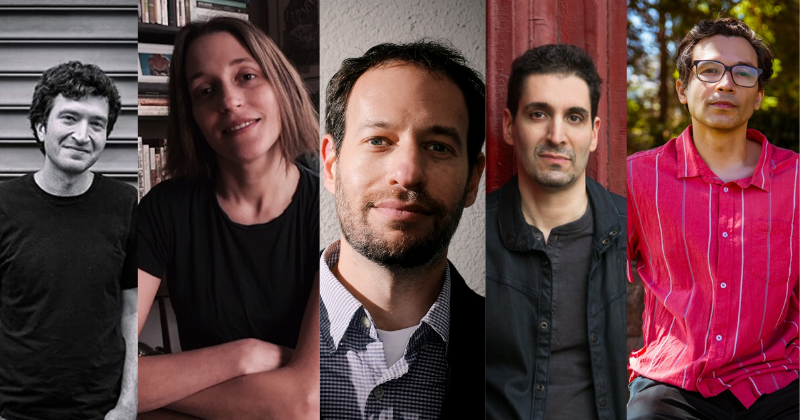 José Vadi: A bunch of meaningful and random journeys across a hyper-changing California.

Callie Garnett: I often thought of a little girl sitting on the floor, circa 1960, riveted by the TV’s test pattern, i.e. those color bars when nothing was being broadcast. This girl comes partly from an anecdote I’ve heard about the origins of Sesame Street (where my mother has worked for many decades), and partly from an idea of my mother as a girl, the first TV generation.

Saïd Sayrafiezadeh: Anything that has to do with race, identity or alienation, preferably all three, preferably when it’s portrayed with humor. Also, theater, rap music, Marxism, and troubling personal experiences.

Ben Apatoff: Watching my friends write books. A voicemail message from my friend Andy in Texas. A certain bicentennial birthday in 2019. The public transit commute from Brooklyn to Newark. All sorts of seemingly-arbitrary stuff that I connected to Metallica because they were always on my mind. The All Within My Hands volunteers in New Jersey. My high school English teacher who told me, “[Redacted] is not a good writer, he just pushes buttons.”

José Vadi: My grandfather and his passing. Unemployment, its associated boredom and creative potential. Realizing I’d lived in the Bay Area for over half my life and that it was changing, daily. Sundays around Oakland’s Lake Merritt, Morcom Rose Garden, and like-minded lurking. The vulnerability involved with skateboarding more frequently.

Lee Matthew Goldberg: A very hot summer, writing under my tree in Central Park, sweating into my laptop, picking tiny red ants out of the keys, surviving a pandemic.

Saïd Sayrafiezadeh: To quote Whodini’s 1984 classic, “Big Mouth”: “You could say what you want, just spell my name right.”

Lee Matthew Goldberg: “Unlikeable” gets me the most. This notion that all characters have to be loved and adored. How about instead of “unlikeable” they change it to “real,” since most people aren’t 100 percent likeable at every moment.

Callie Garnett: Oh easy: “Insufferable” from a YouTube commenter, because there’s so much truth to it.

José Vadi: More so a phrase but “stream of consciousness.”

Ben Apatoff: None, although this question reminded me of the scene in Truth or Dare where Madonna is appalled that Kevin Costner said her show was “Neat.”

José Vadi: A film projectionist—the most essential part of every good movie theater with the least customer service interaction. As an usher working a theater, when you ran into the projectionist during the dead zone after all the movies start, it was like rediscovering an extinct species. Creating that effect professionally is all I can really hope for.

Ben Apatoff: I’d love to be in a band or work on campaigns. Thankfully, those are my ongoing hobbies while teaching is my career.

Lee Matthew Goldberg: If talent wasn’t an issue, definitely a chef. A chef with many restaurants with different cuisines. I’ve always wanted to open up a restaurant called Mustard where every dish would be made with… wait for it… mustard. And since we’re in this fantasy land, a show on Food Network too would be nice.

Saïd Sayrafiezadeh: I would have been an actor. In fact, I tried for many years to be an actor—my first love since childhood—but after I had grown weary of auditioning for terrorists, cab drivers, and Third World despots, I decided that I should choose an art form where I might be able to portray something other than my ethnicity.

Callie Garnett: I think I’m a good reader and editor, which is to say a good thief and arranger. I’d like to be more generative.

Lee Matthew Goldberg: Plotting and dialogue are my strong suit. It’s why I write screenplays as well. I’d like to be better with description and finding a balance between what needs to be described and what can be hidden. I’m always worried I haven’t given enough in terms of what the reader can see, even though I think of my books as very visual.

José Vadi: Regardless of craft or technique, I want to write honestly and with urgency. Ultimately, I just try and write the type of sentences that I like to read. These are often super terse or really long and full of semicolons, weaving disparate ideas into coherent thoughts and trying to talk a little shit, simultaneously.

Saïd Sayrafiezadeh: When I’ve been banging my head against a piece of writing for months, I feel as if I have no strong suits whatsoever. But I’m generally pleased with my titles, encapsulating, understated, thematically useful. At least, I think so—but I’ll leave that for the reader to decide. I’d like to be better at happy endings. On second thought, no I wouldn’t.

Ben Apatoff: An early reader of Metallica: The $24.95 Book said I was good with verbs. On the other hand, I wish I were more productive. It’s easy to scoff at prolific writers for not putting enough care into their work, but there’s an art to getting it done that I admire.

Ben Apatoff: It’s a cliché, but I really did try to write the book I wanted to read but could never find—something that explored the questions Metallica raises and why they matter. Getting a glimpse of how much Metallica means to millions of people, and how much people enjoy reading about art and fandom, I hope my book can give something to its readers.

Lee Matthew Goldberg: I have to put that aside, otherwise writing would be agonizing and I’d never get any work done. If you beat yourself up every time you stare at the blank page, the days will be long, my friend. Some degree of hubris is important in getting 80,000 words to blend together into something coherent.

Saïd Sayrafiezadeh: I’ve always been very comfortable with my narcissism.

Dana Gioia on Why Ray Bradbury is So Essential 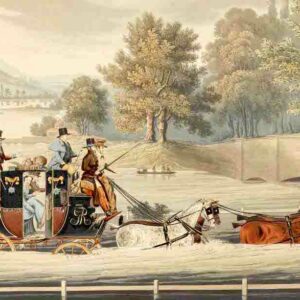 Water is the principal expression of the climate system. Through droughts, storm, and floods, it shapes people’s lives....
© LitHub
Back to top