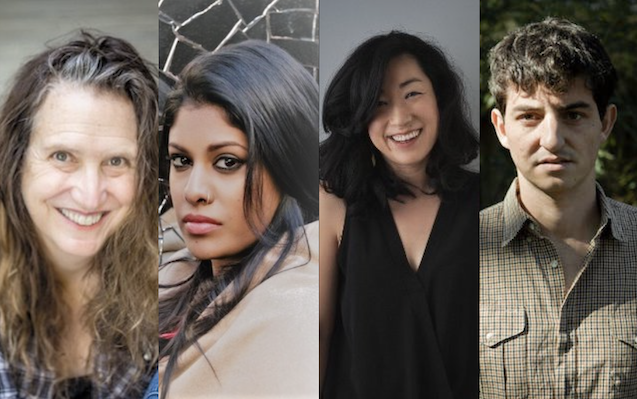 Nathaniel Rich: The experience of watching a novel species of pigeon, designed in a laboratory to serve as a replica of a bird that went extinct a century ago, take its first flight.

Nimmi Gowrinathan: Relentless discomfort with alternate realities; not manicured nails on an AK-47; political lives stretched to capture growing consciousness; the women who constitute and re-constitute you; love fractured by men and movements; an insecure race obsessed with security studies; incomplete freedoms.

KT Sparks: Coming of age in 1980’s Michiana (or, as it was also known then, “the WGN listening area”). Equine mortuary science. Loving something about which you know nothing and for which you have no affinity and loving it so long and so hard and so without hope or possibility of reciprocation that it knocks the wind out of you, permanently. Boilermakers made with Old Style and Crown Royal. Small towns of the Upper Midwest. Club tennis in the age of Chris Evert and Jimmy Connors. The American West, as understood and mythologized by those who have spent very little time there. Cancer, unlikely heroes, quiet despair, dementia, but, you know, made funny. Cowboy poetry.

Nimmi Gowrinathan: Thinking in the margins, from the margins, to the margins: lines that wrestle free of constraints to follow political imagination. Language re-purposed for a cause. The absurdities of inequality in the archives of resistance and a hyper-politicized present. Complete texts that hold you captive to intensity without reprieve. Raw pain in fresh notebooks. Poetic philosophies and the political will of poets.

KT Sparks: Dude ranches. This guy I saw at a dude ranch my family goes to every year—the antithesis of a cowboy—short-sleeved polyester button-down shirt puckering over a substantial beer belly, stretch Khakis with pleats, slip-on orthopedic shoes. He was visiting for the day from someplace like Wisconsin, and I spied on him as he watched the afternoon riders go out. He glazed over and half smiled, and I was certain he was dreaming about loping along with the group, probably as the lead wrangler. Also: the bars (OK, one), beaches, and Blossomtime Festival in the small town where I grew up, the National Cowboy Poetry Gathering, and NPR.

Nimmi Gowrinathan: Two backpacks before the bus. One, a transit visa for re-entry into his father’s home: goggles, lunch box, music book. Tightly grasped for kindergarten comfort on a big-kid bus. The other stuffed with notebooks, missing a laptop charger. Dumped with relief in the worn corner of coffee shop bench.

KT Sparks: This one really wounded me: “A certain tone-deaf humor, a tendency to overstate and explain, an eye toward exaggeration that is not revelatory but merely affirms what the reader already intuits.” It made me feel like a drunk guy at the bar reading jokes too loudly off forty-year-old Playboy cartoon cocktail napkins.

Nimmi Gowrinathan: I recoil at anything that tries to capture the text in a singular ideology (edgy feminist) or sensationalized descriptor (fierce), attempts to attach a time-peg to an expansive theory (#metoo moment), or places an over-emphasis on individual-centered form (memoir) over positioning inside a collective political project.

Angela Mi Young Hur:Nothing consistent—don’t have enough reviews to notice a trend. But I disliked how one reviewer, for a previous book, made incorrect assumptions about me based on a detail in my bio and one line in my novel. Unprofessional, wrong, questionable in tone and intent. I’ve also heard about reviewers using info from acknowledgments. A mentor told me how one reviewer used his author photo against him. Sure, there are parallels between my bio and my novel, but speculations belong in gossip not in reviews.

KT Sparks: One of the women who rides (or rode, since it’s no longer a thing) the elephants in the Ringling Bros. and Barnum & Bailey Circus.

KT Sparks: I’m good at the concrete stuff: putting sentences together, making characters that you can see and hear and occasionally smell, that sort of line-by-line writing. I’m not as good at the bigger picture—not plot but theme and greater meaning. Readers often tell me they like this or that character, but they don’t understand what their purpose in the story is. My response is always some version of: “I have no idea! What do you think? What should they be doing? Let’s get ‘em outta there!”

Nimmi Gowrinathan: Out of the urgency to creatively excavate deep-seated beliefs, I have learned to pull testimonies and narratives through fragments of political life—sprinkled with the dark humor of self-deprecation. I will always strive to encapsulate a complex thought inside the power of a simple sentence.

Angela Mi Young Hur: I can create atmosphere through vivid settings and reveal unexpected thematic linkages, but I need to improve self-editing and control so I don’t overdo it or under-explain. I’ve learned a lot from mentors and editors but need to keep practicing.

Nathaniel Rich: I’m a good note taker. I wish I had a greater tolerance for awkward silences, since they’re one of an interviewer’s best tactics. People will say anything to fill a void.

Angela Mi Young Hur: For my entire writing life, I’ve had writers and so-called friends speak dismissively about my subject matter because I write about Korean American characters. Sometimes they think they have good intentions, guiding me away from a “limited subject” with “limited readership.” Often, it’s diminishing, insulting. Sometimes, it comes from fellow Asian Americans, and I wonder about internalized racism. I don’t contend with my own hubris so much as the hubris of others who presume to know what a book centering on Korean Americans is all about or who believe it’s a subject worthy of only one book per Korean American author.

KT Sparks: I’m a parent. I KNOW no one has any interest in what I have to say. But I truly and desperately hope enough people buy my novel and like it enough that I can keep writing novels (and reading them, because that’s such an integral part of my writing process and also something I’m always trying to find an excuse to do more of) and call it a real job.

Nimmi Gowrinathan: I am critical and conscious of my role in struggle. As activist-scholar Mariame Kaba reminds us “I don’t think my ideas are these original ideas. They belong to a lineage.” 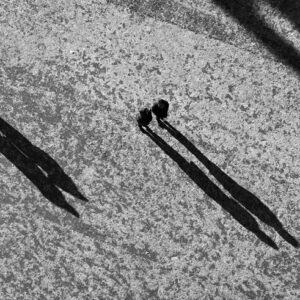 Like thick curly hair, mental illness runs in my family. Psychosis and mood disorders, the two major groups of psychiatric...
© LitHub
Back to top