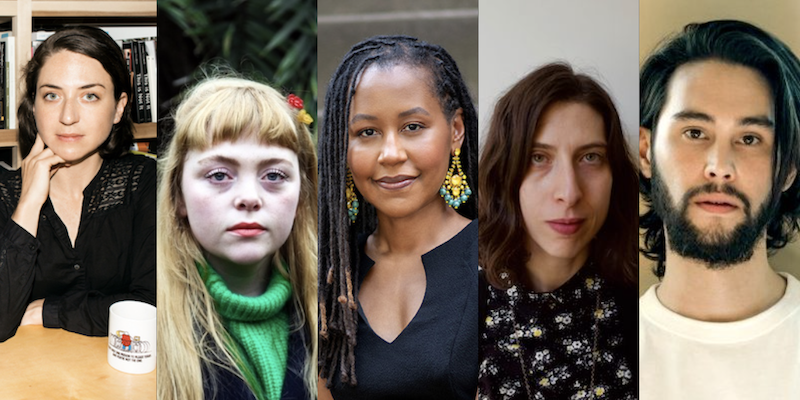 Christine Smallwood (The Life of the Mind)

Jakob Guanzon: What it means to starve in God’s country.

Christine Smallwood: Bleeding, blight, privacy, precarity, phones, interiority, failure, miscarriage, mind, body, contingency, superfluity, doubling, technologies of doubling, shame, anxiety, abjection, waste, reading, writing, teaching, and bathrooms. I like the way a friend summed it up on Twitter: It’s about “the shared experience of living in a world where everything is ending but nothing will end.”

Dawnie Walton: Iconic Black women, rock & roll of the early 1970s, the power of imagery, and ambition vs. other strong forces (internal and external).

Megan Nolan: Obliterating yourself for the sake of romantic love. Enjoying perpetuating that violence on yourself, welcoming others to do so. Regretting it—too late. Drinking. Learning what good and bad sex is.

Lucy Ives: How we usually know what is going to happen but for some reason forget we know it while it is taking place. Does that make sense?

Lucy Ives: The New York City subway, other people on the subway, the Enlightenment, Craigslist, Wikipedia, my then-boyfriend and his love of Tim and Eric, Symbolist poetry, animals.

Christine Smallwood: Everything that someone does, lives, reads, hears, sees, etc. shows up in some way in their writing. All the people they know. The weather. All of it.

Megan Nolan: An unfortunate, unnecessary and hysterical dependence on men in my early-mid twenties. The song “It Never Entered My Mind” by the Miles Davis Quintet. Some artists I became friends with when I moved to London who wrote and performed in ways I found touchingly earnest and explorative.

Jakob Guanzon: Balmy nostalgia for Midwest summers and working with my hands and a particular F-250. Gas station plats du jour and strip-mall parking lots. Walmart. Place-value subtraction. Yes We Can Great Again. My parents’ immigration experience. Their aspirations. Their disappointments. Your birthrights. My fear of children.

Jakob Guanzon: Days spent job hunting. Café Bustelo and boiled eggs and bananas. Rejections (from potential employers and magazines and agents). Debt (astronomical, laughable). Evenings with little else to do but write and read and sketch when not coping with how good my life was (slender, sure, but creatively sating) before I landed a nine-to-five.

Dawnie Walton: The end of my first marriage. Explorations, experiments. A feeling of renewal and heightened awareness.

Christine Smallwood: Having kids, taking care of them. Writing for magazines. Then the pandemic.

Christine Smallwood: I’m happy that anyone would describe it at all.

Jakob Guanzon: “Overwritten,” but, yeah. I get it. There’s a reason why I’m not on Twitter.

Lucy Ives: “Riotous” and “smart” worry me. Although I understand that these are compliments, it sometimes feels a bit like someone in the background is whispering, “…meanwhile, not even a dude!”

Dawnie Walton: Despise is a touch dramatic, but summarizations of my novel as “topical” and “dark” can be frustrating. While there are moments these readers could reasonably describe like this, I worry they’re skimming past the fullness of my characters and the vibrancy of their world on the hunt for What’s Important.

Megan Nolan: Touring musician of only low-moderate fame/acclaim. I always really envied my friends who got to do shitty tours where they slept in the van of someone named Bones in a carpark in Croatia, etc.

Dawnie Walton: Film editing! Playing with aspects of performance, music, and mood… I imagine it’s like making an incredible collage.

Jakob Guanzon: A welder because, duh. Fire + Steel = Creation? Now that there’s a craft. Meanwhile, here I am in my moccasins, agonizing over how to turn squiggles of ink into feelings.

Megan Nolan: I’m good at focusing incisively on motivations and private emotions—getting very close up to thoughts and feelings and approaching that proximity at an enjoyable or at least interesting pace for a reader. I am less experienced with broader world-building which is a shame as my favorite novels are mainly big fat meaty ones which encompass cities and multiple whole lives.

Dawnie Walton: I put a lot of care into crafting my characters, especially their perspectives and voices (down to syntax and what curse words they would or wouldn’t say). I’m also proud of how I manage pacing and action within scenes. I hope that someday endings will come easier, and that they occur to me earlier in the process.

Lucy Ives: Good at: understatement for effect, sentences, fictional names, descriptions of annoying people, including items/digressions that seem potentially un-includable. Like many users of autocorrect, I am very bad at spelling.

Jakob Guanzon: Oh, jeez. The Minnesotan in me would never let me toot my own horn so openly. As for what’s got room for improvement, well, for starters I wish I could write funny.

Dawnie Walton: This isn’t really a worry of mine. Personally, I’m interested in a range of stories that, on the face, have nothing to do with me, as long as they’re compellingly told. So I just try to focus on the telling. (Plus, there’s always the Internet: I suspect I could plug whatever esoteric obsession I’m chasing into Google and find my weirdo kin.)

Megan Nolan: I don’t experience that. It’s an indisputable fact that some people have an interest in what I have to say, whether or not one might think they are foolish for doing so. As to the “should,” I myself am interested in what more or less anyone has to say in some way or other, so I feel no shame about treating myself with the same openness. It’s not that writers should be sheepish about speaking and do it less, it’s that people of all kinds should speak more.

Jakob Guanzon: Our time is precious, a stranger’s attention even more so. That’s why I really, really strive to make stories that grind like hell to earn and then sustain a reader’s attention.

Lucy Ives: As Leonora Carrington has her protagonist reflect in The Living Trumpet, “If I remember correctly writers usually find some excuse for their books, although why one should excuse oneself for having such a quiet and peaceful occupation I really don’t know. Military people never seem to apologize for killing each other yet novelists feel ashamed for writing some nice inert paper book that is not certain to be read by anybody.”

And Death Shall Have Dominion: Tales of Doctors, Their Patients, and What Comes For Us All

When I Lived Across the Hall From Sid Vicious 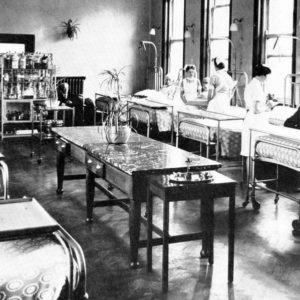 And Death Shall Have Dominion: Tales of Doctors, Their Patients, and What Comes For Us All

Most people have experience of illness and everyone dies, so it is hardly surprising that matters of medical interest or concern...
© LitHub
Back to top