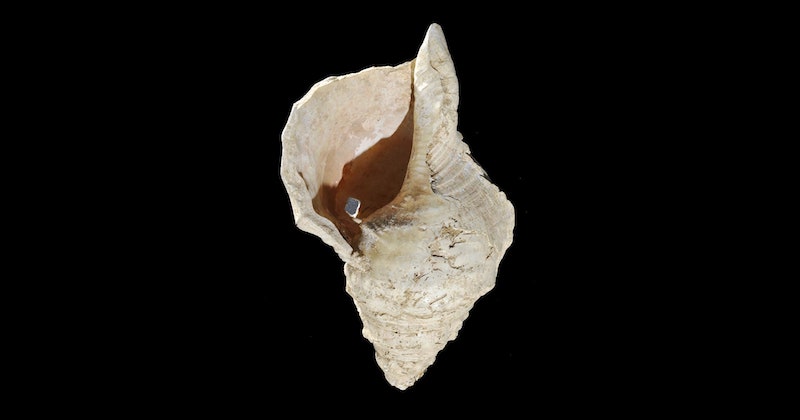 What’s something that isn’t literary but feels literary? An 18,000-year-old conch shell was discovered in a cave in France, and now, we can listen to its sound via our computers.

The French archeologists who originally discovered the shell missed its distinguishing feature: the shell was intentionally modified for use as a musical instrument. Its tip was cut off so a person could blow air into it; modern-day French researchers found traces of resin around the opening, likely used as an adhesive to attach a mouthpiece to the shell. This is particularly distinctive, as conches used as musical instruments today are usually just modified with a hole at the end—no separate mouthpiece to be found.

It’s making me reflect on perhaps the most famous use of a conch in literature, Ralph’s initial conch-blowing in Lord of the Flies:

“He blew from down here.”

Ralph grasped the idea and hit the shell with air from his diaphragm. Immediately the thing sounded. A deep, harsh note boomed under the palms, spread through the intricacies of the forest and echoed back from the pink granite of the mountain . . .

He laid the conch against his lips, took a deep breath and blew once more. The note boomed again; and then at his firmer pressure, the note, fluking up an octave, became a strident blare more penetrating than before.

The shell is unmodified; Piggy and Ralph have just found it in the water. The point of the shell is described as “worn away into a little hole,” likely where the sea snail lived, which makes this description of Ralph’s conch prowess plausible—he has somewhere to blow. Bu I’m surprised that he was so quickly successful. For a preteen, he’s got great breath control. (Though it makes thematic sense that he’s so good at such a nature-coded task: “What are we? Humans? Or animals?”)

And yes, I know Ralph stopped blowing the conch because simply carrying it connoted power, but it seems just as reasonable that he would make modifications to optimize the conch’s sound. After all, that French caveman did. And imagine how much more cheerful the naval officer’s arrival at the end of the book would be: “I should have thought that a pack of British boys would have been able to put up a better show than that. Wait, is that a homemade trumpet? Never mind! That’s amazing! God save the Queen!” But, Ralph had other things to do. And sometimes the greatest ideas are the simplest.