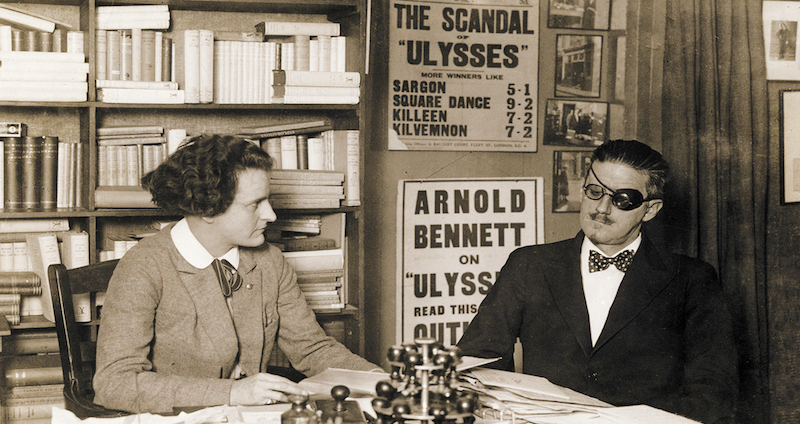 Listen to the first ever recording of James Joyce reading from Ulysses.

On February 2, 1922, Sylvia Beach, through her legendary bookstore and occasional imprint Shakespeare and Company, published the entirety of James Joyce’s modernist novel, Ulysses. (It was also Joyce’s 40th birthday.) Two years later, she sought to have at least some of it recorded in Joyce’s own voice. In 1924, she writes, she sought and gained permission to use the equipment at the recording studio His Master’s Voice—though they would have nothing much to do with the record, and she would have to pay for it herself, out of pocket. Beach did so, ordering thirty copies of the final recording on vinyl, which she mostly gave to Joyce to distribute to friends and family. “Joyce himself was anxious to have this record made, but the day I took him in a taxi to the factory in Billancourt, quite a distance from town, he was suffering with his eyes and very nervous,” Beach recounts.

Luckily, he and [Piero] Coppola [the person in charge of musical records] were soon quite at home with each other, bursting into Italian to discuss music. But the recording was an ordeal for Joyce, and the first attempt was a failure. We went back and began again, and I think the Ulysses record is a wonderful performance. I never hear it without being deeply moved.

Joyce had chosen the speech in the Aeolus episode, the only passage that could be lifted out of Ulysses, he said, and the only one that was “declamatory” and therefore suitable for recital. He had made up his mind, he told me, that this would be his only reading from Ulysses.

I have an idea that it was not for declamatory reasons alone that he chose this passage from Aeolus. I believe that it expressed something he wanted said and preserved in his own voice. As it rings out—“he lifted his voice above it boldly”—it is more, one feels, than mere oratory.

However, C. K. Ogden, the linguist, told Beach that Joyce’s recording was “very bad,” and “boasted that he had the two biggest recording machines in the world at his Cambridge studio.” He asked Beach to “send Joyce over to him for a real recording.” Joyce dutifully went, this time recording the “Anna Livia Plurabelle” section from Finnegans Wake. “So I brought these two together,” Beach writes,

the man who was liberating and expanding the English language and the one who was condensing it to a vocabulary of five hundred words. Their experiments went in opposite directions, but that didn’t prevent them from finding each other’s ideas interesting. Joyce would have starved on five or six hundred words, but he was quite amused by the Basic English version of “Anna Livia Plurabelle” that Ogden published in the review Psyche.

How beautiful the “Anna Livia” recording is, and how amusing Joyce’s rendering of an Irish washerwoman’s brogue! This is a treasure we owe to C. K. Ogden and Basic English. Joyce, with his famous memory, must have known “Anna Livia” by heart. Nevertheless, he faltered at one place and, as in the Ulysses recording, they had to begin again.

Ogden gave me both the first and second versions. Joyce gave me the immense sheets on which Ogden had had “Anna Livia” printed in huge type so that the author-his sight was growing dimmer-could read it without effort. I wondered where Mr. Ogden had got hold of such big type, until my friend Maurice Saillet, examining it, told me that the corresponding pages in the book had been photographed and much enlarged. The “Anna Livia” recording was on both sides of the disc; the passage from Ulysses was contained on one. And it was the only recording from Ulysses that Joyce would consent to.