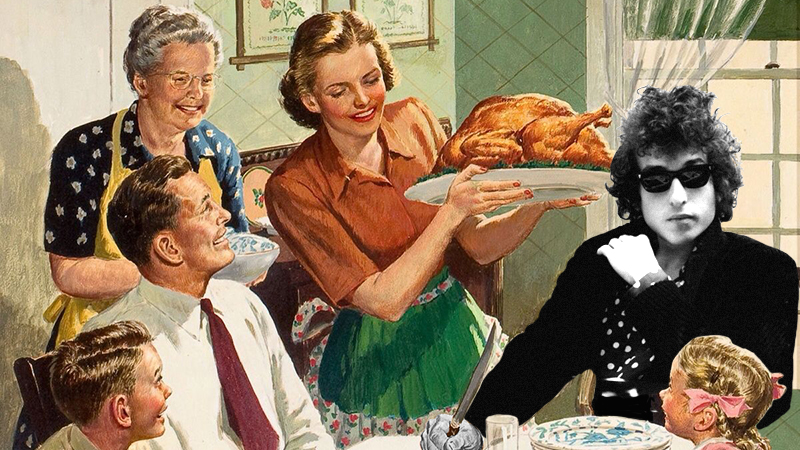 Listen to Marie-Helene Bertino’s short story about a girl who brings Bob Dylan home for Thanksgiving.

By Marie-Helene Bertino and Charles Hagerty

In 2003, I wrote my first short story “North Of,” about a girl who brings Bob Dylan home for Thanksgiving dinner. She wants to convince her brother to not go to war. When her plan fails, she and Bob do a very American thing: Escape her family by driving around.

This year’s holidays are defined by a distance that feels both intimate and global. I asked my friend Charles (Charlie) Hagerty, a professional actor currently living in London, if he’d narrate “North Of” for our family and friends to listen to while they cook, clean, or drive around, as it were.

Listening to the words from his perspective, seventeen years after writing it, I understood the story in a new way. “North Of” isn’t about Thanksgiving, or Philadelphia, or even poor Bob Dylan who I never did let speak, but about a sister longing to be closer to her brother. I suppose it helps that Charlie and I grew up together in Philly. He knows the families and addresses and hearts I’m writing about.

Though it echoes our current climate, “North Of” doesn’t solve anything, nor was it intended to. Like the little sister in the story, I only ever wanted to articulate the distance and, in doing so, bridge it. I hope you enjoy the recording and share with your best friend, whether that’s the Songwriter of our Generation, or someone whose influence happens closer to home.

Listen below, or read the story here.

Marie-Helene Bertino is the author of the novels Parakeet and 2 a.m. at The Cat’s Pajamas, and the story collection Safe as Houses. Her fourth book, the novel Beautyland, is forthcoming from FSG. More info: www.mariehelenebertino.com

Charles Hagerty is an American actor, singer and voice artist. He has performed on Broadway, Off-Broadway, in the West End and on tours around the world. Originally from Philadelphia, he now calls London home.