The Author of The Golden Wolf Talks to C.P. Lesley on the New Books Network

When I spoke with Linnea Hartsuyker back in 2017, her epic saga was just beginning. The first novel opens with her hero, Ragnvald, seeing a vision of a golden wolf who will unite the feuding kingdoms of Norway under one rule. The vision sets the course of Ragnvald’s life, bringing him into the service of Harald Fair-Hair, a young and confident warrior whose counselor and friend Ragnvald becomes. Meanwhile, Ragnvald’s sister, Svanhild, sets off on a different course, one that offers her a life of adventure not often available to women but pits her against her beloved brother.

Twenty years later, Harald has come close to achieving his goal. One more wedding stands between him and a unified Norway. Svanhild and Ragnvald have returned to fighting on the same side, but two decades of wounds and battles, as well as old patterns, are catching up with the older generation. And the three of them have produced a large and varied group of children, most of them sons at or near adulthood, ready to challenge their parents’ ways and dreams. As fathers struggle with sons, mothers with daughters, brothers and cousins among themselves, and husbands with wives and concubines, Ragnvald stubbornly clings to the force of his vision and his dedication to the principles that have guided his life.

Like its predecessors, The Half-Drowned King and The Sea Queen, The Golden Wolf (Harper, 2019) seamlessly blends Old Norse folklore with creative imagination to paint a picture of 9th-century Norway from the inside. Linnea Hartsuyker assembles a cast of characters that, however different they and their world may appear to a modern readership, tackles problems we all can recognize.

C. P. Lesley: The main characters from the first two novels… they’re certainly front and center but how has old age or middle age—how has that affected them?

Linnea Hartsuyker: That was really fun to think about how different those ages would be in the 9th century than they are today because Svanhild would be about 38 and Ragnvald would be about 40, which is my age in The Golden Wolf, but they both have nearly adult children and especially Ragnvald has a lot of injury from battle from his years of fighting and living would have been a lot more rough on people then and I find even myself now at 40 I have to warm up a lot more in the gym now before I do anything athletic.

So kind of multiplying that out by years of battle and injury that never fully healed; Ragnvald especially is really facing his mortality and what it will mean for his future when he can’t fight anymore, when he has to give that over to his sons. Whereas Svanhild I think, she’s become just a lot more rigid over the years, which is also something I think can happen to people as they grow older and she has not had a lot of people gainsaying her in the last fourteen years and I tried to show the effect of that on her personality.

CPL: What about King Harold?

LH: Ha! King Harold—sometimes I think of him more of a weather phenomenon than a character—life goes extremely well for him most of the time so he doesn’t really understand that things aren’t going to stay the same.

CPL: The whole trilogy draws for inspiration on Old Norse Tales and Sagas, and we talked about this a little in our first interview because Harold is actually an ancestor of yours but what can you tell us about the way you wove folklore into the trilogy itself and into The Golden Wolf? Where do you stick with legends and where do you move into your own literary world?

LH: One of the nice things about writing about this period of time is that there is very little written history and even the sagas that I’m drawing from are written many hundreds of years later and so I feel free to use the sagas as a jumping off point that one could understand why they were written the way they were so that people can understand what happened but I have also taken some liberties and especially at the end of The Golden Wolf there’s kind of a huge amount of back and forth in all the sources that would have gotten very tiresome to write and several different kings of this one part of land coming into succession and then quickly dying which I had to abbreviate which I had to abbreviate . . .

But I also thought about history and literature of the time in terms of where this .. it was a pre-literate culture I’m writing about but certainly not a pre-storytelling culture. One of the fun things that I’ve tried to do is integrate my characters’ knowledge of songs and folktales and stories into the world and use those stories deliberately. So there’s times when people tell folktales for a specific emotional or political purpose, and that’s kind of a way I was able to write about these characters who aren’t readers of books like I am but who have a strong sense of story. 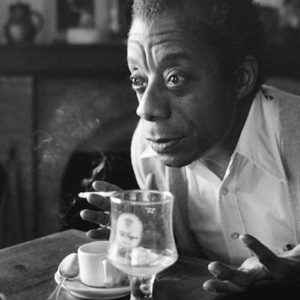 In 1985, Baldwin’s published and some unpublished essays were gathered in a single volume titled The Price of the Ticket....
© LitHub
Back to top