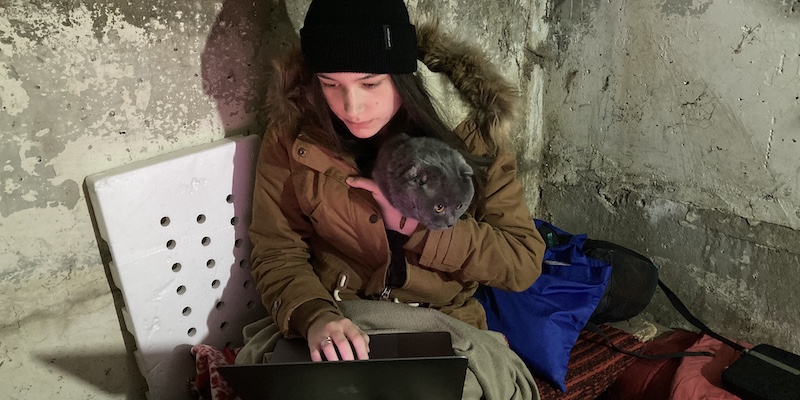 Kateryna Volkova on the Authors and Editors on the Front Lines

Vivat, where I work as a publicity manager, is one of the largest publishers in Ukraine. In pre-war times, it published more than 400 new books each year, and the rights to its books were sold to more than 24 countries in the world. The publishing house has 117 employees, who are now scattered across the world. The city of Kharkiv, where Vivat is based, has been under fire from the first day of the war to the present day; its offices are still intact, but the work there has terminated.

The first month of the war passed with all staff in search of safe places, working mainly to survive; the first and most important goal for the publisher was to keep people safe. To date, 95 percent of all the company employees have been evacuated from the city. Some stayed in the country but moved to quieter places; others left the country while hoping to return. City authorities have stated unequivocally: There are no safe areas in the city anymore. Wherever you are, you may be killed by a Russian missile.

At the same time, even in safety, not everyone could continue their work, as some did not have the technical facilities to do so; all the company’s equipment was left behind in Kharkiv. In spite of those difficulties, we were able to establish new work processes, especially thanks to employees who collected and sent equipment away from the city during the first month of the war. 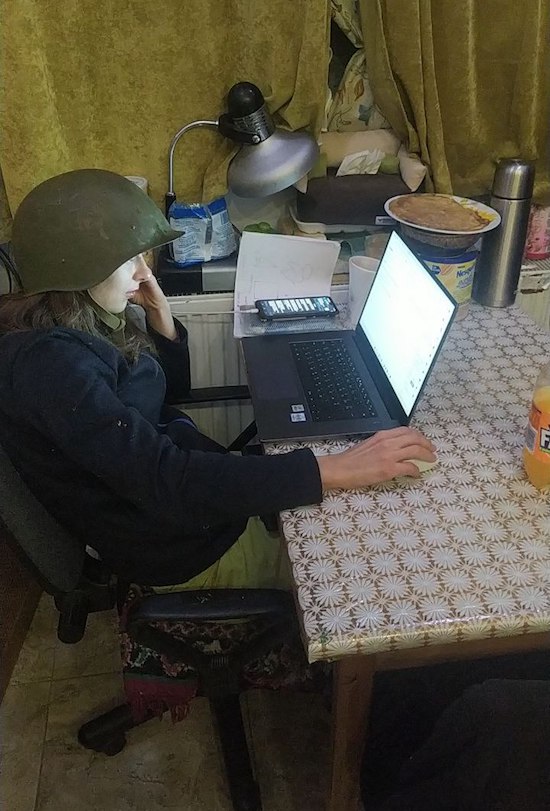 A Vivat employee before evacuation in his bomb shelter at work. Photo via Kateryna Volkova.

In addition to what was left behind at the office, there was another enormous problem for the publishing house: its warehouses are also located in Kharkiv, from which it is not possible to transfer books because of constant shelling. Attempts are still being made to relocate books in small batches to a relatively safe area. However, it is not yet possible to provide the pre-war assortment, delivery frequency, and operation of the online store.

The main income of the publishing house, as it is not difficult to guess, is the sale of books. Given the problems with the warehouse, the company’s financial losses to date amounted to 90 percent, compared to this time last year. The bulk of financial expenses, for the company, is due to the publishing house’s commitment to staff: the main goal is to keep the same members of the team working, even at reduced salaries. That is, no layoffs to save money.

Vivat’s mission is to let the whole world know about the events of this war.

Profit recovery is currently taking place on several fronts. One of the main ones is in the sale of rights abroad. Since the beginning of the war, the demand for Ukrainian books has significantly increased. Certainly, such an interest mostly owes to the growth of Ukrainian refugees abroad; people who have been forced to leave their homes want to read books in their native language, and books provide an opportunity to stay in touch with their country and their lives before the war.

Among these refugees there are many mothers with children, so books are also a necessity for them, due to their new language surroundings. However, foreigners themselves have also become much more interested in Ukrainian books. People want to know more about Ukrainian history, everyday life, art, and traditions. Because of this, Vivat is entering more actively the international market and establishing new offices. Soon we will open a new office in Poland to distribute books there.

The publishing house continues to receive new orders even now. Thanks to the active work on the evacuation of books from Kharkiv, it became possible to fulfill the orders made before the war. Staff has continued to work actively on the books, so now more than 50 new books are now ready for print—but as of April, none of the printing houses in Kharkiv are in operation, and book printing has completely stopped in the city.

To keep published books from being stored for nothing, and to restore the work of as many employees as possible, Vivat has found a new print shop that could take over the printing of our books. There has even been a print order placed for several new products, which we expect to be ready in June.

In April, our publishing house held its first book presentation since the war had begun in one Kharkiv’s bomb shelters. Renowned Ukrainian poet Serhiy Zhadan, together with the Kharkiv band “Village and People,” presented the song “Go the Fuck to Sleep,” based on Adam Mansbach’s satirical book of the same name. On its social media accounts, Vivat also holds live broadcasts in the evenings for Ukrainian authors to read books for children. 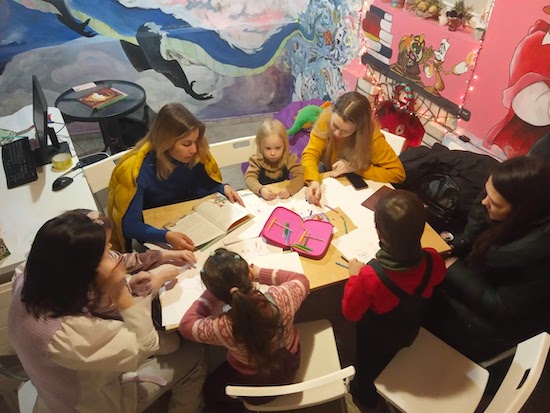 Since the first day of the war, Vivat has been actively fighting on the information front. For example, hundreds of letters were sent to international partners, as well as to foreign authors, with information about what is going on in the country, explaining Putin’s guilt, and requesting to ban all activities with the aggressor country. Our stance is that a global cultural ban on Russia is essential. There are several reasons for this: first and foremost, all Russian publishers are part of Putin’s propaganda.

In the last eight years, publishers have printed hundreds of books about “under-Ukraine,” “Novorossia,” and “evil Banderites.” Also, the publishing business, like all other businesses, pays taxes, which the Kremlin rulers use to finance the war in Ukraine among other things. Russian money is dirty money. Additionally, a number of Russian writers have made public statements in support of the occupation.

Our Ukrainian authors came to the defense of their country from the early days of the invasion, joining the ranks of the Armed Forces of Ukraine and Territorial Defense Forces so that in the future all Ukrainian authors would be able to write about their country and its citizens. Pavlo Kazarin, Oleg Bakulin, Andrii Kokotiukha, Vakhtang Kipiani and Vitaly Zapeka are defending the right of Ukrainians to freedom of speech on the front lines today. For Zapeka, this is not the first combat action. Just a week before the invasion, Vivat published his book, Polinka, which he wrote for his granddaughter while fighting for Ukraine on the front lines in 2015.

Realizing all the risks of leaving her without a grandfather, he wrote a book about the relationships and games between a little girl and her kind and loving grandfather. Many other authors are involved in volunteer work: weaving camouflage nets, organizing humanitarian aid, collecting money for charities, and handling information distribution. 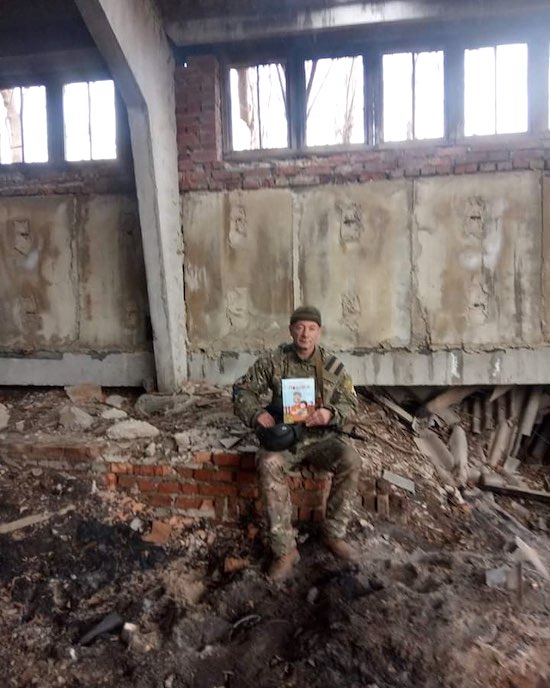 Vitaly Zapeka with his book Polinka on the front lines. Photo via Kateryna Volkova.

After our victory, Ukraine is sure to experience a book boom. After all, before the war, the Ukrainian book market sold a lot of books in the Russian-language segment and, in general, books in Russian count as 50 percent of its entire book market. Now, since there is an embargo on the literature of the occupiers, Ukrainian books will be in strong demand. Vivat’s mission is to let the whole world know about the events of this war, which Ukrainians will never forget.

A little more than a year ago, Vivat won its court case against the book The Case of Vasylii Stus by Vakhtang Kipiani, which described all the bloody crimes of the Soviet government against the dissident, freedom fighter, and poet Vasylii Stus. The lawsuit was brought by Viktor Medvechuk, a well-known pro-Russian politician and Putin’s crony, who was supposed to destabilize the situation in the country by his actions on a tip by the Kremlin. Viktor Medvedchuk has pursued a pro-Russian policy throughout his political career. He and his party opposed Ukraine’s European integration and pushed for the Eurasian Customs Union among Ukrainians who were positively disposed towards it. He was also a vocal defender of the Russian language in Ukraine, advocating the position of introducing it as a second state language.

It is the narrative of “protecting the Russian-speaking population, which is allegedly being oppressed” that is now being actively used by the Russian occupiers to justify their invasion of Ukraine. In 2021, Viktor Medvedchuk was charged with high treason and placed under house arrest by court order. However, the Russians did not take into account that by destroying our books, they would not be able to destroy our freedom and the right to historical truth. 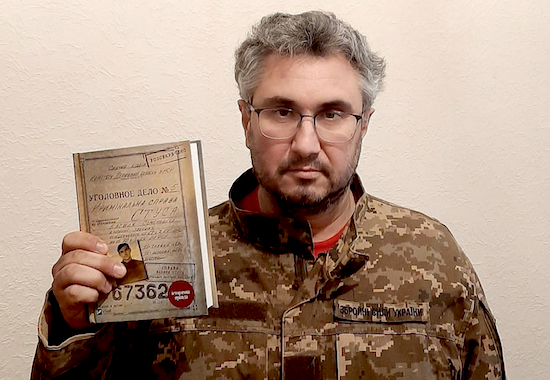 Vakhtang Kipiani with his book The Case of Vasylii Stus. Photo via Kateryna Volkova.

There is no place left for real truthful literature in their country anymore. But it is one thing to break their critical thinking—which is already brainwashed by propaganda—and another to try to do so with people who are used to reading the truth and shouting it to the world.

Today, author Vitaly Zapeka commands an entire battalion on the front lines. And these guys need our help—namely Kevlar helmets, ballistic masks, tactical first-aid kits, knee pads, and water filters. Vivat begins fundraising for the soldiers’ needs. If you have the ability and capacity to help Vitaly get home safe and sound to his granddaughter and go on his book tour as soon as possible, send your donations to this Paypal: mirzaeva.tanya@gmail.com marked “for the 144th battalion.” For more information about the needs and additional details, look here.

Kateryna Volkova is the PR manager of Vivat Publishing House, responsible for branded products, media, and creativity in the team. Last year she graduated from university and became a bachelor's degree in sociology. 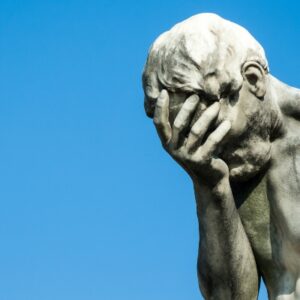 When I was in high school, I learned about the period of martial law in Taiwan and realized how this history affected my family,...
© LitHub
Back to top
Loading Comments...