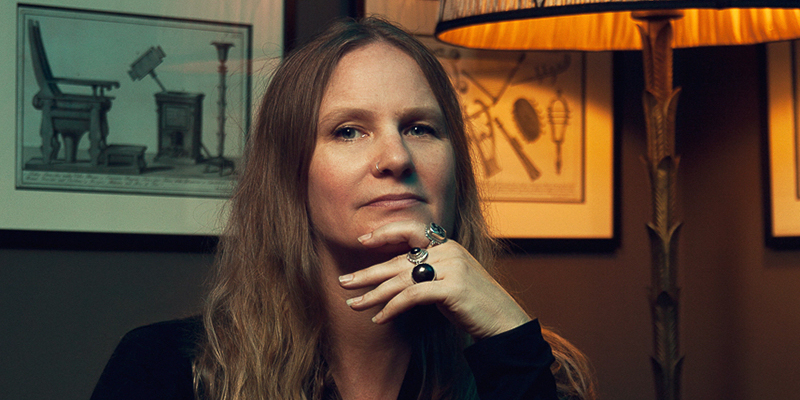 In this episode, Mitzi talks to Lidia Yuknavitch about her latest novel, Thrust.

Mitzi Rapkin: What did you learn, if anything, about the craft of writing from working on such an expansive story?  You had so many threads in Thrust, and you looked at time in a very different way.

Lidia Yuknavitch: It’s not that I didn’t suspect that going even deeper into the polyphonic space of storytelling, where there are many voices instead of the one, that that would be thrilling, and teach me really important things about staying away from the mono story.

But I did not know how deeply changed I would be from the actual process of writing a voice that keeps adapting or turning or fragmenting or multiplying. It actually changed how I think about novels and how I think about nonfiction. In this way, to try to get more specific, when I’m trying to tell the story of my own life, or an invented world, I have to look in the periphery. I have to look behind the foreground. I have to look at the environment around the events and the experiences, not as setting or backdrop, but as participant in the experience. I might have to talk to more animals than I have in the past. I might have to understand my own subjectivity as interlinked or particulate, instead of ego center, like, I shall represent the me story just to exaggerate it.

These are concepts that I’ve been dabbling with or asking questions about for several years now, but this book, taught me to not be a weenie about it. So anyway, this book changed me as a writer forever because I don’t want to tell the kinds of stories I started with, even though they’re interesting to me, they’re part of who I am as a writer, but that’s not the portal that opened up. That’s not where I want to take writing from here. This book feels like I either set sail in a new ship I didn’t know about or I dove into an ocean I didn’t know about or maybe I leaped into a space I didn’t know about it’s really thrilling to be this age and feel like I’m embarking instead of landing or ending.

Lidia Yuknavitch is the National Bestselling author of the novels The Book of Joan and The Small Backs of Children, winner of the 2016 Oregon Book Award, Ken Kesey Award for Fiction as well as the Reader’s Choice Award, the novel Dora: A Headcase, and a critical book on war and narrative, Allegories of Violence. Her widely acclaimed memoir The Chronology of Water was a finalist for a PEN Center USA award for creative nonfiction and winner of a PNBA Award and the Oregon Book Award Reader’s Choice. The Misfit’s Manifesto, a book based on her recent TED Talk, was published by TED Books. Her short story collection is called Verge and her new novel is Thrust.