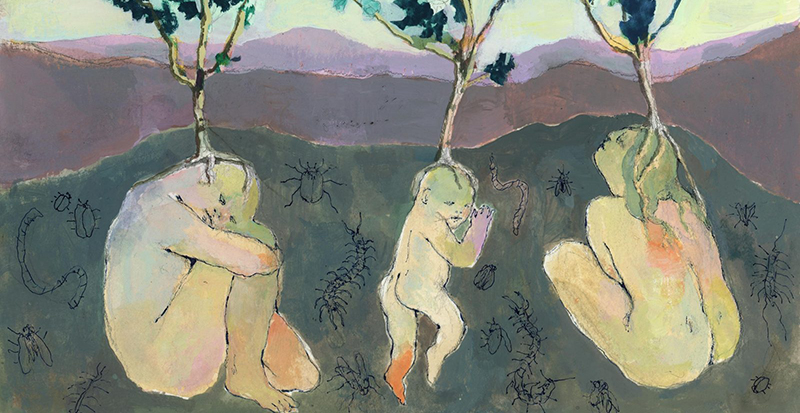 Lia Purpura on the Horrified Wonder and Holiness of Death

In this episode, Lia Purpura delves into the horrified wonder and holiness of death, exploring burial practices that are intended to nourish the earth, as it has nourished us.

Consider the holy work of buzzards—roadside in the summer heat, hunched over bodies steaming in cold, picking and tearing back to bone, savoring all that would otherwise rot. Floating on thermals, grounded in cut fields, buzzards are hybrids of elegance and utility, doing the labor unloved by others, the work of right endings, which is in itself a form of creation. To be made an enticement, an attractive morsel, smeared with yak butter and left on a mountaintop picked back to bone, in the way of Tibetan sky burial—I’d go for that if given the chance.

Hard to come by as an option in Baltimore.

Say, shopping in thrift stores—an easier way to keep the useful in motion. Slipping into another’s garment, my arm in his sleeve, leg in her jeans—a bequeathing, an inheritance. All those objects hauled from sheds, burnished with oil, sweat, rain, heat, dirt; all those flawed but able things, holding light still, inscribed by their days. At the farmer’s market, it’s the seconds I’m after. Peaches, tomatoes—not for the markdown, just that imperfections are misjudged. If choices were based on cycles and time, not hierarchies of beauty, then the seconds—speckled, soft, unround, and windfallen—would be firsts. The ones you know to take-now-and-eat, unequivocally ripe, who need us to complete them, or the sweetness they were raised up for is lost.

Conventions contain our messiness. ou lean into frames and they hold and direct you. Until they don’t. Until the known forms no longer accommodate the shape of your need. As a rule, we hand over so much to the pros. In death to the death handlers, trained to organize our grief—funeral directors who stage presentation (casket or urn), offer gathering spots and golf cart rides, oversee the backhoeing and the limos’ return to the parlors of mourning. To alter the procedure requires planning most of us avoid, and stores of energy hard to conjure in grief. (Note to self in advance: consult members of the Order of the Good Death, a collective of undertakers, activists, mushroom decomposition scientists, writers, artists, medical historians, forensic pathologists, psychiatrists, post-mortem jewelry designers, who have much to offer in the way of choices.)

Not many folks plan on playing death rebel, but that’s what happened for historian Elizabeth Heineman, who, after the still-bearing of her boy, Thor, brought him home to—and what to say here?—live with the family for a while. She writes in her memoir, Ghostbelly, “Having your dead loved ones nearby used to be normal. But nowadays you’re supposed to keep corpses in their proper place, which may be the morgue, may be the funeral home, but most important it is somewhere else, away from the living. But this isn’t the law. It’s just that no one bothers to tell grieving families their options.” With the help of a wild funeral director, she upended and overrode, step by unknowing step. Here, her reasoning—as she says, neither spiritual nor religious—is at its most tender: “Why should the body that was Thor transmogrify from an intimate member of the family, from an intimate part of my own body, into a repellent object just because it had died?” Casting into the future, she realizes, “If we had no memories of Thor, maybe someday it would be as if he’d never existed at all.” So they read to and rested next to him, showed him his neighborhood, playground, and room. Thor had to be real before he could be gone. “As the days passed after Thor’s death,” she writes, “I realized with horrified wonder that I was doing something I had never done before, at least not since early childhood. I was having my own experience.… This was my experience, mine to invent.”

And what did she experience? Being-with in death as a reconstituting of time itself, a new way to ride days into meaning, to live out a proper cycle, albeit terribly foreshortened.

It’s vertiginous, this state of responsive imagining, especially when it arrives at raw moments, sidles up to the crack, and calls across the gap in our knowing. Emerson described the bracing sharp clarity of the imagination as “a very high sort of seeing, which does not come by study, but by the intellect being where and what it sees; by sharing the path or circuit of things through forms, and so making them translucid to others. The path of things is silent. Will they suffer a speaker to go with them? A spy they will not suffer; a lover, a poet, is the transcendency of their own nature,—him they will suffer. The condition of true naming, on the poet’s part, is his resigning himself to the divine aura which breathes through forms, and accompanying that.”

The divine aura which breathes through forms is a fearsome force, not wispy or gauzy, not soft-focus-benign, but sublime, full of “horrified wonder,” a vastness or steepness brought unnervingly close.