Rebecca Solnit on Finding Hope and Resolve for the Future

Climate chaos is the worst thing human beings have brought upon themselves and the earth, and we are just beginning to see its impact, in heartbreaking phenomena from melting ice to starving whales to burning forests. If you’re sad, you’re not alone. If you’re scared, you’re not alone. Those of you who are young have every reason to be furious that you were handed a world entering into an era of catastrophe and disruption. You did nothing to make this mess and most of us who are older didn’t do enough to avert it during the last 30 years that we have known we should act, the last 15 when we had the renewable-energy technology to leave the age of fossil fuel behind.

I would never question the rightness of that fury, but I am going to go after despair, hopelessness, and powerlessness. And maybe your fury pointed in the right direction is a treasure: a non-fossil fuel, a clean-burning fire, a passion to do what we need to do. Fury can fight for all that is still with us and all that is worth protecting. And there is so much that is worth protecting.

The world is still beautiful in so many places. All my life I have been told how much better it was a generation or a century before I got here, and I got here almost 60 years ago. I grew up hearing about the great flocks of passenger pigeons that darkened the eastern sky before they were hunted into extinction, the great herds of bison wandering across the western plains, the forests that covered immense portions of the eastern USA, the salmon so dense in western rivers you could hardly see the water. I grew up being told that it had been purer, better, bigger before I got here. It was.

But what is here now is beautiful.

Last spring I went on a long walk on a big hill just north of where I grew up, and the beauty overwhelmed me. It was ordinary beauty: it was the greenness of new grass and old gray oak trees with their gnarled branches sprouting tender new oak leaves with sun shining through them. It was ordinary woodpeckers and stellar jays, Douglas iris, the wonderful moss that looks like both green fur and tiny fern fronds all along the boughs of some of the trees. I realized on that walk that I have been told all my life to compare the present to the past. If we compare it to the future, we can imagine that later generations may look back on us alive in 2020 as the lucky ones.

I have seen change that was unimaginable until it happened and then became so ordinary-seeming a part of everyday life that people forgot there was a struggle.

We need to love the earth as it is now and to see how worthy it is, now, of our greatest efforts. To look for that beauty and to treasure it is perhaps a crucial part of the work we have to do. This is what reminds us that the world is still full of things we love and want to protect and the effort is worth it. Galicia, the fury you feel is the hard outer shell of love: if you’re angry it’s because something you love is threatened and you want to defend it.

We can envy some of what people had 50 or 100 years ago, but people 50 or 100 years from now will think about us the same way. In 2120, there will still be much of the beauty of the inorganic natural world, of sunrise, moonlight, waterfalls, daily tides. And there will be wildlife, there will be forests, there will be rivers, birds in the sky—well in some skies. What condition those phenomena are in depends on us now. Morissa Zuckerman of the Sunrise Movement wrote me, “Yes, it’s late. Too late for some things. But every bill we pass and pipeline we stop and candidate we elect and community we transform and amount of C02 we reduce means lives saved. And that MATTERS.”

We, more than almost any other human generation, are shaping the future. Some of us are shaping it for the better, and the best cure for fear is action: becoming a climate activist is for the climate, but it will give you companionship in the questions, the doubts, and the possibilities, and it will give you power. The power of people held together by passionate conviction. So many young people have energized and transformed the climate movement in the past couple of years: from the members of the US-based Sunrise Movement to the indigenous youth around the world—including Quannah Chasinghorse of Alaska, Helen Gualinga of the Ecuadoran Amazon, and Catarina Lorenzo of Brazil who is, at 12, a year younger than you—and, of course, Greta Thunberg of Sweden. They have dreamed bigger and demanded more. As Thunberg says, “no one is too small to make a difference.”

If you look harder at the natural world you can see that human beings are capable of change, and that environmental victories are all around us. I grew up in an era when DDT had driven a lot of birds—eagles, hawks, pelicans among them—to the brink of extinction. Rachel Carson’s book Silent Spring and the work of concerned people succeeded in getting DDT banned in the USA. Wildlife populations rebounded. I grew up on the edge of countryside that had none of the coyotes and mountain lions that are now so abundant here; they had been hunted out, as had the elephant seals thought to be extinct a century ago, now protected. Those behemoths came back to the central California coast in the 1980s and they’re there now, bellowing and giving birth, mating and, for the two-ton males, fighting. The natural world is strong and resilient. This does not mean that everything is fine. It does mean that given half a chance some of the natural world will survive, and giving that chance depends on us. Life wants to live.

I know the fear and fury about climate destruction is also life wanting to live, and it’s generosity that wants life, and good life, for others—other people, other species, other lives in times yet to come.

There’s a thing I call naïve cynicism, when people strike a pose of sophistication without actually knowing what they’re talking about. I see it a lot with the ill-informed about climate, when they say it’s all over and we lost. That’s not what the scientists say, and it’s an excuse to give up instead of trying. We owe it to the refugees on the US’s southern border fleeing crop failure in Central America; we owe it to the farmers flooded out last spring from Mozambique to Nebraska, and to the people—including your family—still struggling to recover from 2017’s Hurricane Maria in Puerto Rico or 2018’s wildfire in Paradise, California; we owe it to South Pacific Islanders watching the sea rise over their homelands.

We owe it to the whales, to every songbird in every tree, to frogs and trout and fireflies.

There is one hummingbird on the power line outside the window of the room I’m writing this in, in the middle of San Francisco, and this work is worth it just for hummingbirds. It’s worth it for sunlight through new grass. It’s worth it for one person you will never meet who will be born on the other side of the world in 2057. Life wants to live.

Naïve cynicism is the offspring of amnesia. Amnesia says “the way things are now is inevitable, change is impossible, change for the better is beyond our power.” Memory says, not so fast: ordinary people massed together have changed the world again and again. I was born in the middle of the Civil Rights Movement, at the dawn of movements for women’s rights and rights for queer people. I am a year older than Rachel Carson’s landmark book about the catastrophic impact of pesticides, Silent Spring, and was born into a world where there was barely an environmental movement, barely environmental consciousness. I am older than the Clean Air Act and Clean Water Act that did a lot to limit how much we poisoned air and water (and that Trump, of course, has been weakening). I am much older than the first black woman senator and the first out gay elected official (and at thirteen, you are much older than the terms of the first Native American and Muslim congresswomen and first Latina senator, all elected in that glorious blue wave in 2018).

I have been told all my life to compare the present to the past. If we compare it to the future, we can imagine that later generations may look back on us alive in 2020 as the lucky ones.

When I was young, it seemed likely that the United States and USSR would launch an all-out nuclear war that would destroy much of life on earth. In the early 1980s, “the living will envy the dead” was a phrase that caught on about life after nuclear armageddon. It seemed reasonable to imagine that the Cold War and the USSR would be there in a hundred and maybe a thousand years if they didn’t blow everything up and kill everything off. Then in 1991, over a few stunning months, the USSR fell apart in front of us, and as it crumbled so did the the global geopolitics that after 45 years had seemed so permanent.

I have seen change that was unimaginable until it happened and then became so ordinary-seeming a part of everyday life that people forgot there was a struggle, forgot there was a transformation, forgot how we got here, forgot that we are living in the once-unimaginable. I believe that there are many unimaginables in this moment that will become, must become ordinary, including the end of the era of fossil fuel. Almost no one seems to know that 20 years ago, we literally did not have the solution, because wind and solar were ineffectual and expensive; we have had an energy revolution that now makes it possible to make the transition we need, and it’s not unimaginable now—just unimagined because it’s so overlooked.

I read an amazing quote by the novelist Rene Denfeld. She was talking about surviving sexual abuse, but it could apply to so many things:

We need to understand the worst-case scenarios and the suffering and loss happening now, so we know what we’re trying to prevent. But we need to imagine the best case scenarios, so we can reach for them too. And we need to imagine our own power in the present to choose the one over the other. And then we need to act. I believe that resistance, that standing on principle, that engaging with the trouble, is good for the soul, a way to connect, a way to be powerful. And get results.

It’s a couple of hours later and there’s another hummingbird on the power lines on this sunny winter day. Morissa also sent me a quote from the Talmud: “Do not be daunted by the enormity of the world’s grief. Do justly, now. Walk humbly, now. You are not obligated to complete the work, but neither are you free to abandon it.”

Live From Miami: T.C. Boyle on Writing About LSD and Outside Looking In 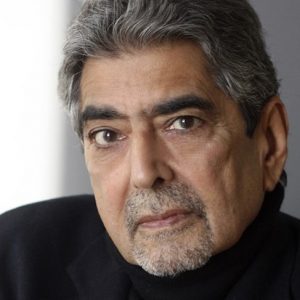 Legendary editor and publisher Sonny Mehta has died. As announced this morning via press release, Sonny Mehta—legendary and beloved editor in chief of Knopf, and chairman of Knopf...
© LitHub
Back to top