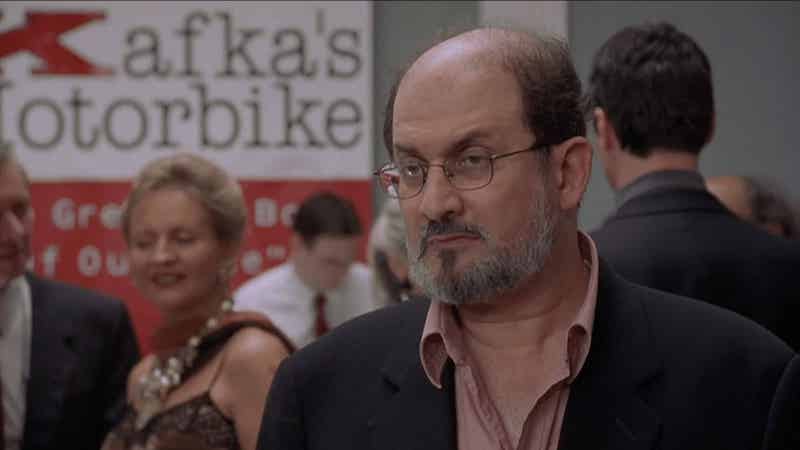 Has any contemporary author played versions of themselves in more movies than Salman Rushdie? (This is a rhetorical question; please do not email me.) As a repeat (and repeat, and repeat) viewer of the all-time great rom-com Bridget Jones’s Diary, I was of course familiar with Rushdie’s work as fictional Rushdie, generously attempting to include Bridget in a cocktail party conversation about the novella.

It turns out, though, that Rushdie has played “Salman Rushdie”—a credit distinct from “himself—in five projects, according to his IMDb page. Bridget Jones was the first, in 2001, followed by an appearance in Eric Idle’s mockumentary The Rutles 2: Can’t Buy Me Lunch in 2003. (“The word ‘rock and roll’ itself, of course, essentially means ‘shagging,'” the fictional Salman Rushdie explains.)

In 2007, Rushdie diversified his resume when he played a character named Dr. Masani in the Helen Hunt-directed dramedy Then She Found Me, in which Hunt plays a woman who discovers her biological mother is a “flamboyant local talk show host” (Bette Midler). It’s also based on a book, though not one by any Salman Rushdie.

The very next year comes Rushdie’s appearance as Rushdie in the music video for Scarlett Johansson’s song “Falling Down.” As a person who purchased a plaid flannel poet shirt in 2008, I am in no position to judge anyone else’s activities from that year, but neither the song nor the video are very good. Rushdie appears for approximately one second, smiling in black and white, before the screen cuts to a small lynx.

Moving along to 2014, we have Salman Rushdie as Salman Rushdie on show W1A, another British mockumentary (this one about the management of the BBC). In Rushdie’s scene, he’s arm-wrestling with BBC presenter Alan Yentob in a closed-door office. Zany!

Finally, in 2017, Salman Rushdie played Salman Rushdie on an episode of Curb Your Enthusiasm, in which he advises Larry (who in the show is writing a musical based on Rushdie’s life) after Iran’s Ayatollah issues a fatwa against him. ( Rushdie the character tells Larry that if he stops hiding, the fatwa will function as “sexy pixie dust” and make beautiful women attracted to his danger. “Be a man… and fatwa sex will follow.” (I assume Salman Rushdie the character was also married to noted extremely hot person Padma Lakshmi.)

What an incredible micro-career of playing himself this man has had.