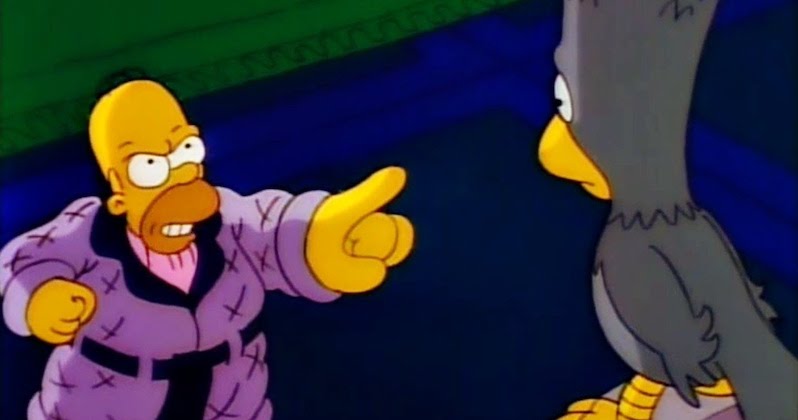 Let’s remember when The Simpsons did “The Raven.”

And the Raven, never flitting, still is sitting, still is sitting
On the pallid bust of Pallas just above my chamber door;
And his eyes have all the seeming of a demon’s that is dreaming,
And the lamp-light o’er him streaming throws his shadow on the floor;
And my soul from out that shadow that lies floating on the floor
Shall be lifted—nevermore!

177 years ago this month, Edgar Allan Poe, the most famous depressive in American literary history, published “The Raven.”

A gothic narrative poem about a young, Poe-esque scholar—ensconced in his chamber on a bleak December night, mourning his lost love, Lenore—who is driven to madness and despair by the taunting utterances of a (possibly) supernatural corvus, “The Raven” was an instant sensation, easily the most popular work Poe published in his lifetime, though it brought him little financial success (Poe was paid $9 by The American Review for the poem, the equivalent of $35 today).

Poe wanted a “non-reasoning” creature that was nonetheless capable of speech to serve as his central symbol of “mournful and never-ending remembrance,” and so his narrator’s tormentor became a raven. So popular was the poem (which was reprinted, illustrated, imitated, and parodied almost immediately following its initial publication), and the titular bird at its center, that Poe himself was soon being referred to as “The Raven” by pleasurably creeped-out readers countrywide.

Despite its runaway success, I doubt that Poe (who died destitute, in another man’s clothes, less than five years later) could ever have imagined just how deeply and widely his opus would penetrate the popular consciousness over the next two centuries. It’s not much of an exaggeration to say that Poe and his raven are everywhere. From Gustave Doré’s hauntingly beautiful 1883 illustrations to Paul Gauguin’s mournful 1897 oil paining Nevermore, Neil Gaiman’s epic fantasy American Gods to Bill Watterson’s marvelous Calvin and Hobbes comic “A Nauseous Nocturne,” Roger Corman’s The Raven to Tim Burton’s Batman, Lou Reed’s 2003 concept album The Raven to the Baltimore Ravens football team (the mascot for which, incidentally, is a raven named Poe).

Now, I could happily sit here all day googling, and then listing, the greatest ever nods to “The Raven” in pop culture, but why search for also-rans when we all know what the runaway winner will be?

Yes, a little over thirty-one years ago, the writers of a then-fledgling animated sitcom called The Simpsons took a big ‘ol swing and made “The Raven” the denouement of their first ever Treehouse of Horror Halloween-themed special episode, and in so doing blew all other corvine competitors out of the water.

At the time, The Simpsons was only a couple of episodes into its second season (Wikipedia tells me that the show is currently mid-way through its 33rd…sigh…) and creator Matt Groening was worried that devoting an entire segment to what is essentially a gag-free, line-for-line recitation of a 19th century poem would be “the worst, most pretentious thing [we had] ever done.” Most pretentious? Perhaps. Worst? Bite your tongue, Matt.

In the end Groening’s fears proved unfounded as almost 15 million households watched a jittery Poe-Homer fly into a rage and chase an impudent Bart-raven around an animated study as James Earl Jones recites Poe’s 150-year-old verse in his inimitable basso profondo voice. Poe-Homer falls asleep reading a copy of Forgotten Lore, Vol. II, gets bonked on the head by the unseen censer, and wails upward at Lenore-Marge’s portrait, which stretches up to the ceiling to accommodate the subject’s towering blue beehive. The whole thing leaves real Homer quivering in fear from his eavesdropper’s perch on the branch outside the kids’ treehouse.

It’s a thoroughly delightful four-and-a-half minutes of television, a literary milestone for mainstream animation, and the sole reason so many millions of children (myself included) sought out Poe’s writing at a young age.