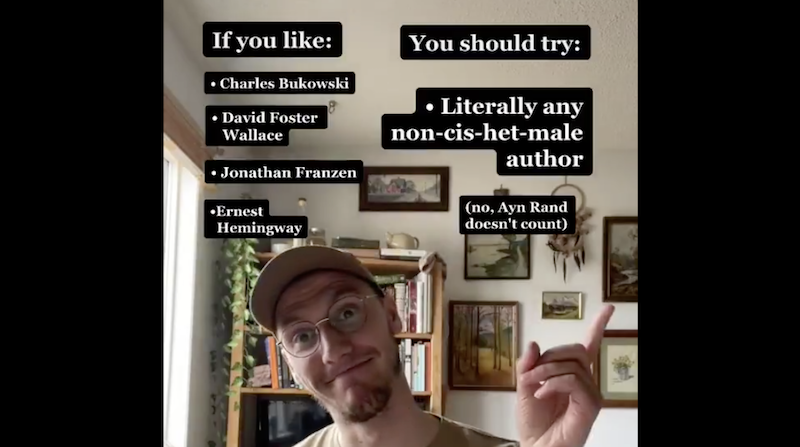 Let’s hope the latest book TikTok controversy is the last.

I am sorry to report that there is a new controversial TikTok making its way around the literary internet.

There’s a lot to unpack here—the song, the dreamcatcher, the fact this post came from a “Seamus Heaney stan account,” the strange implication that Ayn Rand is the only female author to ever have had bad politics. (Maybe she didn’t read any female authors!) But this is just the latest in a slew of TikToks and tweets with a common message: that certain books are incriminating evidence that the reader is a bad person, usually a bad man. 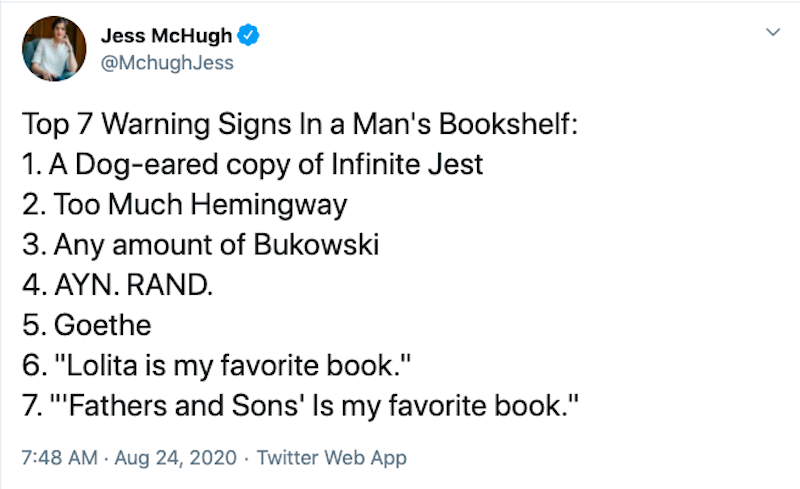 Look what i found while trawling! pic.twitter.com/AHHuZC86Xh

The point of this micro-genre of content is always muddy. It’s not about dissuading readers from reading the work of abusers; Franzen’s on the list. It’s not about combating the Western canon in classrooms; the content is about individuals reading for pleasure. And it’s not about supporting under-appreciated female authors who haven’t had the opportunities of their male counterparts, as these people don’t recommend any alternatives.

Instead, it’s espousing the comforting fiction of transparency—that taste reveals character. It would be convenient if you could spot danger through someone’s reading habits, and you could make someone agree with you by simply exposing them to books that champion your preferred values. Unfortunately, it’s not true. Engaging with a book does not mean engaging deeply, and engaging deeply with a book does not mean adopting the beliefs of the main character or author. Anyone forced to obey a school reading list knows this. Reading a moral book does not make you moral. Reading a book by a woman, alas, does not make you respect women. Yes, some misogynists read Infinite Jest; some also read Trick Mirror. (Some read both.) People who behave in unkind, frightening, and abusive ways are everywhere and read all types of books.

For some reason, we keep having this conversation. Every month someone on Twitter declares that everyone who reads Wallace/Franzen/Hemingway/Nabokov/Bolano is toxic (somehow) in regards to gender (somehow) and probably has other damning qualities (like not having a bed frame), and then lots of other people leap in to proclaim the untruth of the statement, and both sides feel satisfied in having stood up for reason, and then the next month it happens again, a little less vigorous every time. Why?

My pet theory is that it’s because we all want to talk about books and our personal artistic tastes, but are sublimating that desire into a socially “important” conversation. Robbed of opportunities to talk art in private spheres, we turn to Twitter, but criticizing work publicly can feel mean (these writers, if living, could see it! these writers could lose their jobs!) and risky (what if your opinion is wrong?). It’s easier to feel grounded in your artistic opinions and your right to express them if you’re standing up for unambiguous rightness. And it’s more clicky.

But we all want to talk about books, so let’s talk about them. Let your artistic opinions flow free! That’s much more fun than using the same tired scripts. After all, we only have one life to live. And that life is short. Tik Tok.