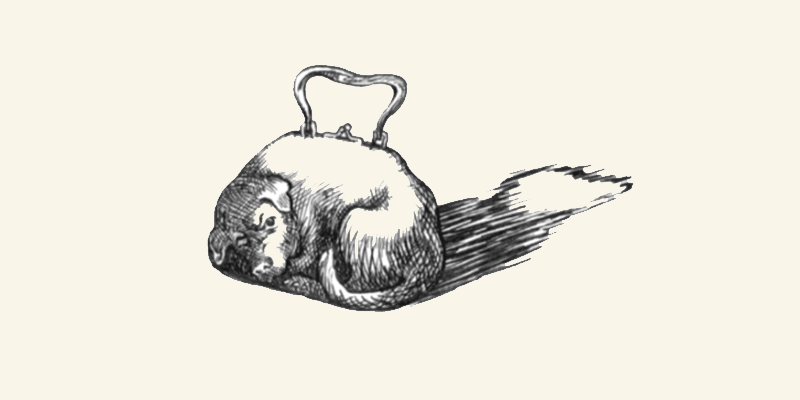 Once in a while, you come across a short story that just puts a spell on you. You reach the end of it, and you find yourself a little changed, and you want to turn back to the beginning and read it over—even more carefully—line by line to look for clues as to how such an impossibly perfect thing can exist. Kelly Link’s “The Faery Handbag” is that story to me. It kicks off her brilliant collection, Magic for Beginners, and is a great introduction to her writing in case you have had the displeasure of not encountering it so far in your life. (Also, May is apparently Short Story Month, so it’s really a great time to get into it.)

I don’t think I can do this story justice by explaining what it’s about, so I highly encourage you to see for yourself, but here’s this: “The Faery Handbag” starts at a thrift shop. From the start, we’re led into a place where objects have backstories. Our narrator and her young friends play a game where they close their eyes and guess what color the fabric they’re touching is. It’s a genius introduction: it brings you fully into the world of their logic, and it opens you up to the possibility that we mere humans might be able to divine something in a banal place. Next, we’re told that they once found a Muppets T-shirt that belonged to a friend once, in the third grade. What a subtle move! It establishes that this is a world of coincidence, and a world in which your past might rise up to meet you. Then we find out that our narrator comes here weekly, hunting down a family heirloom that was lost: Grandmother Zofia’s eponymous faery handbag:

The faery handbag: It’s huge and black and kind of hairy. Even when your eyes are closed, it feels black. As black as black ever gets, like if you touch it, your hand might get stuck in it, like tar or black quicksand or when you stretch out your hand at night, to turn on a light, but all you feel is darkness.

Fairies live inside it. I know what that sounds like, but it’s true.

What follows is a heartbreaking and funny story in which we find out: 1) Grandmother Zofia is dead, but 2) our narrator doesn’t believe that, and 3) the grandmother used to tell all sorts of fantastical stories in which she claimed to be from a magical land that you could access through (you guessed it) the faery handbag. There is also another plot line following Jake, a dear friend (maybe more) of the narrator; he’s got an unlucky lot in life, and he becomes obsessed with magic/disappearing acts/the handbag. At the time that we’re being told the story, he’s gone, too. Down the handbag. It’s one of those eerie magical realism stories that just toes the line. You’re never sure if you should bat all this away with a logical and grim explanation or if you should indulge in this wild and hopeful fantasy.

Personally, I don’t re-read things often. I get stressed out about how much I haven’t read, and then re-visiting well-trodden ground feels almost like a waste of time to me, with a few special exceptions. No matter how many times I read ”The Faery Handbag,” it surprises me. How does she do that? How does she keep us suspended, straddling the line of the surreal? What a balancing act! I don’t think I’ll ever completely understand how she imbued the page with such magic. (Worth checking out, though, is her advice to debut writers. She doesn’t give away her secrets, but my personal favorite tip is “Perfect one karaoke song.”)

There is one scene in this story, though, that I think is a bit of a wink, a tip of the hat, a tilt of the hand. She generously shows us her cards a little bit.

In the scene in question, our narrator and Zofia are playing Scrabble:

Zofia always won, even though her English wasn’t all that great, because we’d decided that she was allowed to use Baldeziwurleki vocabulary. Baldeziwurlekistan is where Zofia was born, over two hundred years ago. That’s what Zofia said.

I know what you’re thinking. What is Baldeziwurlekistan? Don’t worry: our young narrator calls her out the first time they play.

“That’s not a word,” I said. “Baldeziwurlekistan is not a word. Besides, you can’t do that. You can’t put an eighteen-letter word on a board that’s fifteen squares across.”

“Challenge,” I said. I went and got the dictionary and looked it up. “There’s no such place.”

“Of course there isn’t nowadays,” Zofia said. “It wasn’t a very big place, even when it was a place. But you’ve heard of Samarkand, and Uzbekistan and the Silk Road and Genghis Khan. Haven’t I told you about meeting Genghis Khan?”

I looked up Samarkand. “Okay,” I said. “Samarkand is a real place. A real word. But Baldeziwurlekistan isn’t.”

Kelly Link is a lot like dear Zofia. She starts us off with something we recognize: Scrabble. We’ve played it before. We know the rules. And then she throws down something completely unexpected, something nonsensical, and convinces you of its true-ness. But she keeps us on the border by bringing back real-life things. Buoys in her storm. We’re anchored by Samarkand. We’re thrown off balance again by the appearance of more Baldeziwurleki words. She uses all her letters, but never in the order we expect.