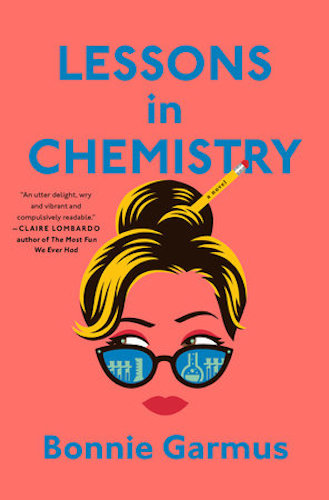 The following is Bonnie Garmus' debut novel, Lessons in Chemistry. Garmus is a copywriter and creative director who has worked widely in the fields of technology, medicine, and education. She’s an open-water swimmer, a rower, and mother to two pretty amazing daughters. Born in California and most recently from Seattle, she currently lives in London with her husband and her dog, 99.

Once a research chemist, Elizabeth Zott was a woman with flaw-less skin and an unmistakable demeanor of someone who was not average and never would be.

She was, as all good stars are, discovered. Although in Elizabeth’s case, there was no malt shop, no accidental bench sighting, no lucky introduction. Instead, it was theft—specifically food theft—that led to her discovery.

The story was simple: a child named Amanda Pine, who enjoyed food in a way some therapists consider significant, was eating Madeline’s lunch. This was because Madeline’s lunch was not average. While all the other children gummed their peanut butter and jelly sandwiches, Madeline opened her lunch box to find a thick slice of leftover lasagna, a side helping of buttery zucchini, an exotic kiwi cut into quarters, five pearly round cherry tomatoes, a tiny Morton salt shaker, two still-warm chocolate chip cookies, and a red plaid thermos full of ice-cold milk.

These contents were why everyone wanted Madeline’s lunch, Madeline included. But Madeline offered it to Amanda because friendship requires sacrifice, but also because Amanda was the only one in the entire school who didn’t make fun of the odd child Madeline already knew she was.

It wasn’t until Elizabeth noticed that Madeline’s clothes began to hang on her bony frame like bad drapes that she began to wonder what was going on. According to her calculations, Madeline’s daily intake was exactly what her daughter required for optimal development, making weight loss scientifically inconceivable. A growth spurt, then? No. She’d accounted for growth in her calculations. Early onset food disorder? Not likely. Madeline ate like a horse at dinner. Leukemia? Definitely not. Elizabeth wasn’t an alarmist—she wasn’t the type who lay awake at night imagining her daughter was plagued by incurable disease. As a scientist, she always sought a sensible explanation, and the moment she met Amanda Pine, her little lips stained a pomodoro-sauce red, she knew she’d found it.

“Mr. Pine,” Elizabeth said, sweeping into the local television studio and past a secretary on a Wednesday afternoon, “I’ve been calling you for three days, and not once have you managed the courtesy of a return call. My name is Elizabeth Zott. I am Madeline Zott’s mother—our children attend Woody Elementary together—and I’m here to tell you that your daughter is offering my daughter friendship under false pretenses.” And because he looked confused, she added, “Your daughter is eating my daughter’s lunch.”

“L-lunch?” Walter Pine managed, as he took in the woman who stood resplendent before him, her white lab coat casting an aura of holy light save for one detail: the initials “E.Z.” emblazoned in red just above the pocket.

Walter could only stare. Tall and angular, with hair the color of burnt buttered toast pulled back and secured with a pencil, she stood, hands on hips, her lips unapologetically red, her skin luminous, her nose straight. She looked down at him like a battlefield medic assessing whether or not he was worth saving.

“And the fact that she pretends to be Madeline’s friend to get her lunch,” she continued, “is absolutely reprehensible.”

“Wh-who are you again?” stammered Walter.

Walter nodded, trying to understand. As a longtime producer of afternoon television, he knew drama. But this? He continued to stare. She was stunning. He was literally stunned by her. Was she auditioning for something?

“I’m sorry,” he finally said. “But all the nurse roles have been cast.”

“I beg your pardon?” she snapped. There was a long pause.

He blinked. “My daughter? Oh,” he said, suddenly nervous. “What about her? Are you a doctor? Are you from the school?” He leapt to his feet.

“Good god, no,” Elizabeth replied. “I’m a chemist. I’ve come all the way over here from Hastings on my lunch hour because you’ve failed to return my calls.” And when he continued to look baffled, she clarified. “Hastings Research Institute? Where Groundbreaking Research Breaks Ground?” She exhaled at the vacuous tagline. “The point is, I put a great amount of effort into making a nutritious lunch for Madeline—something that I’m sure you also strive to do for your child.” And when he continued to stare at her blankly, she added, “Because you care about Amanda’s cognitive and physical development. Because you know such development is reliant on offering the correct balance of vitamins and minerals.”

“Yes, I know. Missing in action. I tried to contact her but was told she lives in New York.”

“Sorry to hear, but divorce has little to do with lunch.” “It might seem that way, but—”

“A man can make lunch, Mr. Pine. It is not biologically impossible.”

“I have something in the cyclotron,” she said irritably, glancing at her watch. “Do we have an understanding or not?”

Elizabeth glanced at the walls. They were filled with framed posters advertising melodramatic soap operas and gimmicky game shows.

“My work,” Walter said, suddenly embarrassed by their crassness. “Maybe you’ve seen one?”

She turned back to face him. “Mr. Pine,” she said in a more conciliatory manner, “I’m sorry I don’t have the time or resources to make your daughter lunch. We both know food is the catalyst that unlocks our brains, binds our families, and determines our futures. And yet…” She trailed off, her eyes growing narrow as she took in a soap opera poster featuring a nurse giving a patient some unusual care. “Does anyone have the time to teach the entire nation to make food that matters? I wish I did, but I don’t. Do you?”

As she turned to leave, Pine, not wanting her to go or fully understanding what he was about to hatch, said quickly, “Wait, please just stop—please. What—what was that thing you just said? About teaching the whole nation how to make food that—that matters?”

Supper at Six debuted four weeks later. And while Elizabeth wasn’t entirely keen on the idea—she was a research chemist— she took the job for the usual reasons: it paid more and she had a child to support.

From the first day Elizabeth donned an apron and walked onto the set, it was obvious: she had “it,” the “it” being that elusive, entirely watchable quality. But she was also a person of substance— someone so forthright, so no-nonsense that people didn’t know what to make of her. While other cooking shows featured good-natured chefs gleefully tipping back the sherry, Elizabeth Zott was serious. She never smiled. She never made jokes. And her dishes were as honest and down-to-earth as she was.

Within six months, Elizabeth’s show was a rising star. Within a year, an institution. And within two years, it had proven its uncanny power not only to unite parents with their children, but citizens with their country. It is not an exaggeration to say that when Elizabeth Zott finished cooking, an entire nation sat down to eat.

Even Vice President Lyndon Johnson watched her show. “You want to know what I think?” he said as he waved off a persistent reporter. “I think you ought to write less and watch TV more. Start with Supper at Six—that Zott, she knows what she’s doing.”

And she did. You’d never find Elizabeth Zott explaining how to make tiny cucumber sandwiches or delicate soufflés. Her recipes were hearty: stews, casseroles, things made in big metal pans. She stressed the four food groups. She believed in decent portions. And she insisted that any dish worth making was worth making in under an hour. She ended every show with her signature line: “Children, set the table. Your mother needs a moment to herself.”

But then a prominent reporter wrote an article entitled “Why We’ll Eat Whatever She Dishes Out” and, in passing, referred to her as “Luscious Lizzie,” a nickname that, because it was both apt and alliterative, stuck to her as quickly as it did the paper it was printed on. From that day forward, strangers called her Luscious, but her daughter, Madeline, called her Mom, and although she was just a child, Madeline could already see that the nickname belittled her mother’s talents. She was a chemist, not a TV cook. And Elizabeth, self-conscious in front of her only child, felt ashamed.

Sometimes Elizabeth lay in bed at night and wondered how her life had come to this. But the wonder never lasted long because she already knew.

His name was Calvin Evans.

Artist Kim Schoenstadt on Finding Redemption Through Creativity and Kinship 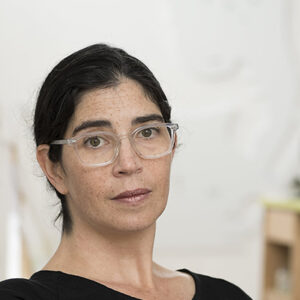