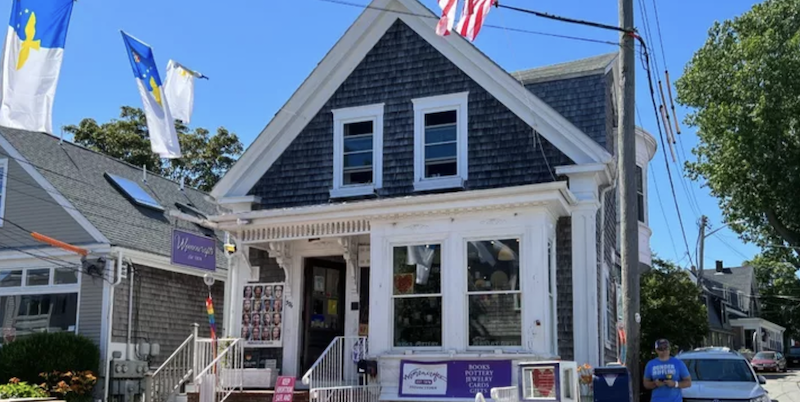 A historic lesbian-owned queer bookstore is fighting to stay open.

I was 13 years old in a suburban mall Barnes & Noble, holding a copy of Please Don’t Kill the Freshman by Zoe Trope. The cover—featuring the silhouette of a young cheerleader whose stance seems sarcastic, her pom-poms flopping against gashes of blue and red—was young, angry, and awesome. I flipped through it, reading words and phrases that were utterly new to me: “genderless,” “first girlfriend turned first boifriend,” “makes beauty with her hands.” I felt unsteady; I didn’t know what was happening; I took it home with me.

This was the first specifically queer book in my life: the teenage diary of a pseudonymous author (who has since come out as Zoe Fisher, a Portland-based writer and librarian), who wrote about crushes, calling bullshit, and high school drama in explosive prose. Before, it had been Anne and Diana, Samantha and Nellie, and other passionately close female friendships—the “and they were just roommates” of YA in the early 2000s, if you will. I wasn’t aware of what these stories had in common, but without knowing it, I was looking for clues as to what a life between women could look like.

Every queer person has their own version of this story, and so often, the story begins with a book. Now, a space that has supported those books for generations needs help.

Since 1976, Womencrafts, a lesbian-owned feminist bookstore, has been selling queer books and art in Provincetown, Massachusetts, a historic queer haven on the tip of Cape Cod that has sheltered gay writers and artists for decades. Michelle Axelson purchased the business in 2015; now, the building’s owner Kathryn Livelli, who previously owned Womencrafts, is putting the space up for sale. If Axelson doesn’t raise $200,000 for a down payment by Aug. 1, the unit will be sold.

Axelson has turned to GoFundMe to raise the money, and with two weeks left, she still needs $20,000.

“At Womencrafts, we gather to discover books and art, organize protests, make friends, and strengthen community ties,” she wrote on GoFundMe, adding:

Inside Womencrafts’ four welcoming walls, thousands of people have publicly shared who they are for the first time — including a woman in her 60s who came out as a lesbian earlier this summer. It is where couples can embrace and kiss in a moment of shared intimacy … where parents of a trans kid can find affirmation, books, and resources … and where we can see our lives reflected and celebrated in art, books, music, and more.

One of those people is Erica Rose, co-director of the Lesbian Bar Project, a venture that has grown in recent years from a documentary about the remaining lesbian bars in the US to a national movement to save them. When she visited Provincetown with her family as a child, Rose found Womenscraft to be a refuge of openly queer culture; a rare space where queer stories, desires, and sensibilities were easily within reach.

Before she could fully express her own queer identity, “I found that I would exhibit my queer interest through going to bookstores like Womenscraft and being able to browse the shelves for something that felt so taboo … and also so exciting,” she said. “Even though I couldn’t necessarily identify what was going on with me yet, I knew it was a safe space for me.”

Even with the proliferation of queer stories across books and media in recent years, brick-and-mortar queer spaces remain under-supported. The Lesbian Bar Project has counted 21 remaining lesbian bars in the US; in 2018, Book Riot listed 24 queer bookstores in North America. And although other bookstores and bars may take steps to make their spaces welcoming (and do), it still makes a difference for a queer space to explicitly assert itself as such: to open itself as a place of spontaneous queer discovery, where simply being present is a life-affirming assertion of queerness.

Less than two weeks left: let’s do it.