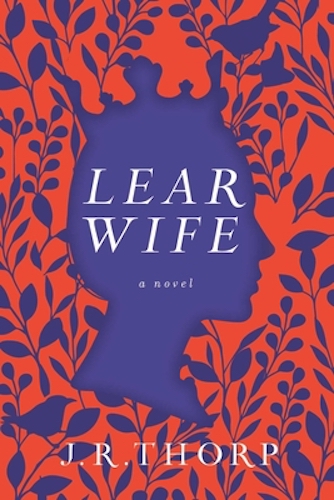 The following is excerpted from J.R. Thorp's novel, Learwife. Thorp is an Australian writer and lyricist living in Ireland who has won awards for her short fiction and wrote the libretto for the modern opera Dear Marie Stopes. Learwife is her first novel.

The word has come that he is dead, now, and the girls. And that it is finished.

Today they will ring the bells. The priest will say four masses, for their souls. The autumn light is fragile and my veil is thick, and I must descend. To light the candles. This is just and Christian, and I am afraid. I pause now at the head of the stair. The arc of a silvered glass on the wall holds my face, its jaw thrust like blackthorn. Through the density of my linen veil it loses its distinguishing parts, becomes mass and hollow, an unnamed plain. I trace the forehead, the lips he once called house of all my country, and they are foreign, without place. Hidden, like a white fox in a blizzard.

Though my sight is covered I feel the first shadows of vespers arriving. The peeling off of sky.

I am the queen of two crowns, banished fifteen years, the famed and gilded woman, bad-luck baleful girl, mother of three small animals, now gone. I am fifty-five years old. I am Lear’s wife. I am here. History has not taken my body, not yet.

The lady Ruth holds my arm, her shoulder’s serving thickness at my back. I lean to the wall of the stair and pitch forth, into the dark.

In the abbey chapel they are massed, waiting. Few of them have seen me; I am mostly myth, the abbess’s legendary woman. Taut in herself. Their covered heads turn: nuns are not invulnerable to curiosity—they seek God in every small stone.

Shame flows into me. That the queen should be here, that she is thrown so low in the world. It makes me ache in my lungs and mouth, a pain that smothers even the misery I have been under since yesterday, when the messenger came. That was low and brutal, a keening. This new raw feeling is higher, cruel, as if pressed burning on my hand.

Ruth moves to lay my veil over my shoulder. As a modest widow should wear.

I feel its weight on my body and am engulfed with fire. Scorch across the floor. The bloodiness of my rage, the color of it on my skin, burning all that touch me. Hence Lear would call me storm-wife, as he walked through the upper hall banging shutters in pretended caution, knowing that my anger could tear away a roof, strip a palace clear.

I full throw the veil across my forehead and find the light. My age-scored cheeks, the famous eyes that Lear’s Fool held as ‘sweet vipers’ in verse: let them witness it. A queen wrapped, indistinct, is no queen. Let me be fresh to them, bleeding, brought in still shuddering from the hunt. Let them prise me from the jaw of this.

A woman’s small intake of breath, at my nakedness, the raw circle of my face. Which they have never seen. Then silence.

So unveiled I take the front pew, with its royal mark, the crest of the king upon a cushion never used. The priest Manfred will not look at my face. Begins.

After he has done, we process down the aisle. The abbess pauses, lets me pass before her from the front pew. Rank is here even in death.

So: I lead them all out into the pale sun of the abbey cloisters. Head of the funeral column. I think of horses, of a small local animal being hitched to tiers of carriage-ponies to guide them across rivers or dense marsh ground. Pushing through mist in the royal coach, I once looked out and saw a donkey raise its trembling ears at the front of the train, listening to the air.

They are expecting me to weep. Also they wish to see me in full, the sun on my half-greyed hair, and compare my face to the circulated woodcuts from my marriages. Most had it near to the bone: a long chin, high eyes in a watchful oval under a blotted, spiked crown. Ancient blood pooling in my cheeks. The artists gave me a small mouth for fashion, but really I have a broadness in the lower lip, which Lear’s braver poets liked to pun upon. She’s of good stock, she has the lip of a stockfish.

What one remembers, what comes swimming up from the silt. I have been here for fifteen years.

The abbess comes and places her fingers on my bare wrist, then does the sign of the Holy Cross, stitching it into the air, where it hangs. In great grief there is still the glory of the Lord, she says, and is so deeply young she has perhaps not presided over a memorial of rank before. Even a mocker such as this—a funeral with no bodies, merely four candles on the altar-cloth, to signify. One flame, and one, and one, and one.

Suddenly my density, the anger that had weighed me to my seat, like a stone, is dissolved, and instead there is dangerous lightness, hollow, as if a child could blow and collapse me.

I take my wrist from her and give it to the lady Ruth, who grips it wholly, within both hands. She has been crying, the moist edge of her habit clinging to her neck. The abbess wants to speak, looks at my face, retreats.

When the messenger came I was rising from prayer, shaking the dust from my tunic, which has Flemish thickness to distinguish myself, my visible rank. I heard his horse stamp beside the gate and thought, Stallion, eighteen hands, hard-ridden. I have animal-sound in me: I can hear the brush of them through walls and know their bone-weight, how they move.

He came through the courtyard, asked for the abbess by name to give his news. Had sweat across his back down to the slick of his breeches from the swiftness and inelegance of the ride. I knew and measured men by that once.

The abbess said, May his God protect and cherish his soul.

A violent thing descended. Hawk-swoop. All that was raised in me, every round part, was flattened. Scraped clean. The remainder was sheer, one could not grip it. I felt slick, slipping out of palms like a wet stone. Forgot speech, forgot how to move my throat for breath.

A nun offered me her hand. In what I distantly recognized as an indication of my own madness I took it. I who would not accept an arm to aid me onto a horse fifteen hands high.

The thought surfaced: Once again he surprises me.

The following is excerpted from Learwife by J.R. Thorp (Pegasus).

You can now buy Mary Shelley’s old address—though you’ll have to bring your own goth.

Thibault Manekin on Daring to Change the World 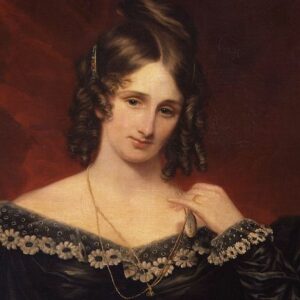 You can now buy Mary Shelley’s old address—though you’ll have to bring your own goth. News for Frankenstein fans, or just fans of the monster: according to Mansion Global, a two-bedroom Bloomsbury apartment...
© LitHub
Back to top