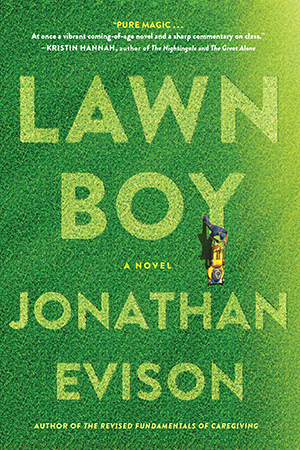 The following is from Jonathan Evison's novel, Lawn Boy. Growing up in Washington State, Mike Munoz felt like he was always waiting for something to happen, something that would bring him closer to an American ideal of happiness and prosperity. Just a few years out of high school, he gets fired from his gig as a lawn boy—just one in a string of menial jobs. Jonathan Evison is the author of four previous novels, including All About Lulu and West of Here.

When I was five years old, back when my old man was still sort of around, I watched a promotional video for Disneyland that my mom got in the free box of VHS tapes at the library. Basically, the video was a virtual tour of the Disneyland grounds. I guess you could say it was a harbinger of things to come, because what really sparked my burgeoning imagination, more than all the fanfare and rides, was the fastidious landscaping: the big, perfectly formed Donald Duck– and Pluto-shaped bushes, the vibrant floral beds depicting Mickey and Minnie, and the impeccably manicured lawns. It looked like paradise to me. I would have given anything to experience Disneyland. For months, all I talked about was the Happiest Place on Earth. Mom said if we scrimped and saved hard enough, and we stayed with my dad’s family in El Sereno, maybe we could pull off such a visit.

“What do you think, Victor?” she said to my old man, sprawled on the sofa.

“We’ll see about it,” he said, turning up the Mariners game and repositioning his ass.

I knew he was just blowing us off. But I wouldn’t let it go. I kept pushing for weeks, to where my old man would get really irritable every time I brought it up. Finally, one day he dragged me out to the driveway.

Even at five, I was a little circumspect. But what choice did I have except to jump into the Impala?

“What about Nate and Mom?”

“Don’t worry about them.”

We drove through Poulsbo in the rain and took the junction south to Silverdale, my old man unshaven, in a dirty T-shirt, stonily silent, gripping the wheel at ten and two. After twenty minutes, I started getting impatient.

“It took a leap of faith to believe such a thing could actually happen to me, but I chose to believe, with all my heart.”

Then I recognized East Bremerton, and I thought maybe we were going to pick up our food stamps on the way or that this was all a big trick to take me to the walk-in clinic again to get a flu shot. My old man stopped at a minimart and left me in the car. He came back out with a big can of beer in a brown paper bag, and a Sprite, which he tossed across the seat at me, so when I opened it up, it fizzed all over the place. But he didn’t yell at me—not this time. He just drank his beer calmly out of the brown bag and kept on driving in silence.

“Are you sure this is the way?”

We kept driving until we got downtown near the old naval shipyard, where he parked the car on a deserted side street, and we just sat there looking at the brick facade of an old warehouse while he sipped the last of his beer, his eyes darting back and forth between the street and the rearview mirror.

“C’mon,” he said, stashing the empty beer can under the seat.

It’s not that I was stupid, okay? I was five years old. Yes, I imagined Disneyland would be a lot farther away. I had no idea that Bremerton wasn’t in Southern California—who knew? It took a leap of faith to believe such a thing could actually happen to me, but I chose to believe, with all my heart. As I trudged along the Bremerton waterfront in the trail of my father’s cigarette smoke, I was practically weightless with joy and wonderment—I still remember that sensation. And that’s the thing of it, I never want to forget it. That brief blossoming of expectation, those few delicious moments before the fall, those moments in which I let myself believe something extraordinary was about to happen, that I, little Mike Muñoz, with the dad who called him Polla Pequeña and the chain-smoking mother and the mentally retarded big brother, was actually going to enter the Happiest Place on Earth—they are still among the most poignant moments of my entire life.

When I peered through the chain-link fence, across the expanse of half-barren concrete, at the rusting hulls of the great gray navy vessels, I was perplexed. The place looked big enough, sure. But where was the castle? Where were Mickey and Goofy and Pluto? Where were the big animal-shaped shrubs and the frothing sea of colorful flowers and the lush expanse of green grass that had so thoroughly sparked my imagination? Also, shouldn’t we be hearing the laughter of children? Shouldn’t it smell like cotton candy or roasted peanuts?

Instead, there were only the frenzied cries of a dozen feeding seagulls and a waterfront redolent with the stench of dead clams and urine. The only bush in sight was a blighted thing about three feet high, an Almond Joy wrapper clinging to one of its bare limbs.

My old man clenched the chain-link fence and looked out over the shipyard in the rain, drawing irritably from his cigarette.

That was Victor Muñoz for you, world’s greatest dad.

Needless to say, I cried. The entire walk back to the car, I followed in my father’s shadow, chin quivering, vision blurred. But I didn’t let my old man see me crying. I wasn’t gonna give him the pleasure. The whole drive home, I gritted my teeth and tried to make myself believe that it could still happen someday, if only to spite my father, that one day in the not-so-distant future, if I hoped hard enough, I might still gain entrance to the Happiest Place on Earth.

A kid can dream, can’t he? And that’s what I did, for a while, anyway, until the relentless indignities of privation wore my innocence to a nub, awakening me to the reality that dreams were for dreamers. The point is, I’m not a child anymore.

From Lawn Boy. Used with permission of Algonquin Books. Copyright © 2018 by Jonathan Evison. 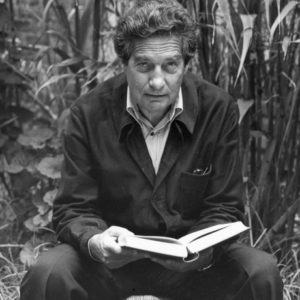 Lit Hub Daily: April 19, 2018 So, who’s actually funny in the age of Trump? Sloane Crosley and Alexandra Petri talk to Whitney Terrell and V.V....
© LitHub
Back to top