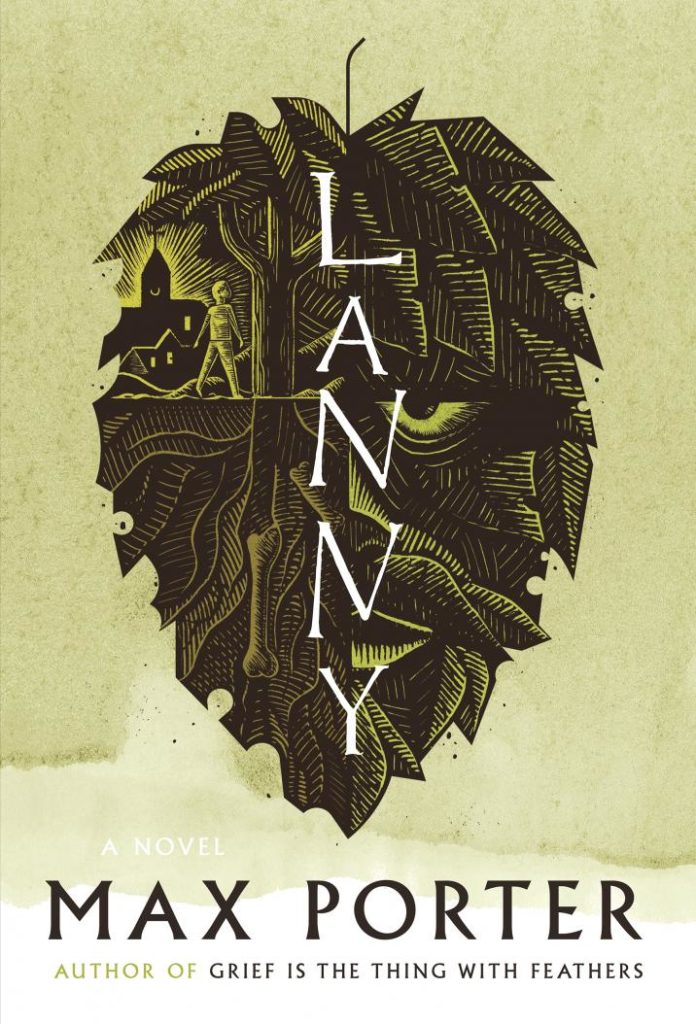 The following is an excerpt from Max Porter's new novel Lanny, which is out May 2019 from Graywolf Press. This novel is a ringing defense of creativity, spirit, and the generative forces that often seem under assault in the contemporary world. Max Porter is also the author of Grief Is the Thing with Feathers, which won the International Dylan Thomas Prize and the Sunday Times/PFD Young Writer of the Year Award, and was shortlisted for the Guardian First Book Award and the Goldsmiths Prize.

Robert said I should try again to offer Pete some money.

We argued about it.

He brought it up at a dinner party with Greg and Sally.

Tell me, he said, is it or is it not weird that Mad Pete is giving free art lessons to Lanny?

Don’t call him that, I said, because I think it’s horrid, and I dislike the cruelty Robert performs when he’s drinking, when he is showing off to friends.

I vote not in the slightest bit weird, said Greg. He’s Peter Blythe, he was pretty famous back in the day, so you’re getting a bargain. And if they get on well, and he needs the company, go for it.

‘Needs the company’ is exactly why it’s not right. It’s unprofessional, said Sally.

Exactly, says Robert, waving his expensive salad tongs. Who needs the company? Are we lending out our son to stave off Pete’s loneliness? Like conversational meals on wheels for sad old artists?

Oh fuck off, Robert, I said. Is it beyond your shrunken world view to imagine that something nice might exist without money ever needing to change hands?

Go on Robert, I think to myself, deal with your angry wife and your weird son.

Bloody hell, love. Fine. I just think you should insist on making it a formal thing, that’s all. In my shrunken world view, I think that’s the right thing to do.

Sally, who is a fool, giggled and said, Raw nerve Rob, and Robert and I shared a flickering and bitter conspiratorial glance because he detests being called Rob.

So I knocked on Pete’s door. Come in, he said.

I won’t, I’m killing someone important in my book. I just popped down to give you this.

Some money for Lanny’s art lessons. Oh no, you mustn’t.

We feel we ought to, I said. And I was proud of myself for saying ‘we’, proud of my insincere solidarity with Robert.

I feel you absolutely ought not to, said Pete. As I said before, just buy a golden bird in the spring. I won’t accept payment for something I’m enjoying so much. Your son has brought me joy. He’s got a good eye. I like showing him things.

He loves it, I said. He sits in his room and draws, and sings.

Good, said Pete. I should be paying you!

I walked up the village street, pretending to be on my phone so as not to have to stop and chat to Peggy about the coming moral apocalypse, and I squirmed in the imaginary space between how Robert would react to a comment like that – I should be paying you! – and how I wanted to hear it. I wanted to be charmed by a comment like that. I wanted dinner parties with Pete, not Greg and Sally. Dinners where nobody speaks for a while, where we talk about books we’ve read, and someone falls asleep and it’s not weird or eccentric, it’s just slow and kind, unhurried and accepting. Acceptance is a fascination of mine. I ask at every parent’s evening, Is Lanny accepted? Well-liked? Settling in?

And his teacher says, Lanny? You make him sound like an illegal alien. Lanny’s wonderful, absolutely at ease and well-liked, as if he’s been here forever.

I hate the smell of metal, Pete.

He mumbles as we sit, dangling legs over a chalky ledge, up in Hatchett Wood. The village is a cruciform grid with the twin hearts of church and pub in the middle. Four hundred people sheltered from the fields, clinging to each other for warmth. Redbrick boxes and the outlying farms, the big house, the timber yard, a handful of scruffy agricultural blemishes on the green patchwork skin of this area. If you looked at the village from above and it was a man, then his hair would be Hatchett Wood. We’d be sitting on top of his brain.

The smell of metal scares me, he says.

At once I am a child again, smelling my palms.

The smell of metal lingers on my lips and on my fingers.

My father would have me count his coppers on a Sunday. Memory swings like a hard dirt rudder then slips up with a boom and a crack and catches the wind.

Why do they call you Mad Pete?

Hah! I dunno mate. I don’t think my covering all the trees up by the cricket pitch with plaster-of-Paris after the Great Storm did me any favours. Anyway, I don’t mind it. Mad Pete. Better than Bad Pete.

Well yes. Isn’t fair though, given how fuckin’ – excuse my language – given how insane some of the folk in this village are.

Exactly! She wears a Santa costume every day of the year and carries a golf club in her wicker basket and I don’t hear anyone calling her Mad Jean.

I’m awake, thinking of quarterly dividends and Olympic women cyclists. I hear the crunch of gravel, too heavy for a fox, too light for a man. I hop out of bed, pad across the room and peek out of the curtain.

I tiptoe hurriedly across the bedroom, out onto the landing, down the stairs, avoiding the creaky step. I’m not sure why I’m being secretive. I go through the kitchen and out of the open back door.

He’s at the bottom of the driveway turning onto the lawn.

I follow at a safe distance. He walks to the old oak.

He kneels and presses his ear to it. This whole thing is lit by the security light, and beautiful, like a film set.

Lanny lies down, talking to the base of the tree.

I wander over, heavy footfall and a cough so as not to surprise.

He turns to me, green eyes flashing, wide awake.

Oh wow, do I sleepwalk?

What? Well, I don’t know. What the hell are you doing out here?

Yes, I realise that now, Lan. I’m wondering what you’re doing out here. I assumed you were sleepwalking. It’s the middle of the night.

I heard the girl in the tree. What?

There’s a girl living under this tree. She’s lived here for hundreds of years. Her parents were cruel to her so she hid under this tree and she’s never come out.

He offers no resistance as I scoop him up. He’s freezing cold.

As we crunch back up the drive I tell him, Lanny, you shouldn’t wander about in the dark.

Have you ever heard her?

No. I think you’ve imagined it. There’s nobody living in the tree.

I carry him up and lie him down, cover him with his duvet, add another blanket, give him his stuffed polar bear.

Which do you think is more patient, an idea or a hope?

I’m suddenly really annoyed. He’s too old for shit like this. Or too young. It’s fucking silly.

Go to sleep Lanny, and don’t get out of bed. We’ll talk about this in the morning.

I lie awake worrying, picturing my son lying on the cold grass whispering to a tree. Which do you think is more patient, an idea or a hope? What’s wrong with him?

It’s Lanny’s idea, a game he plays with his folks in the car. We are to tell a story, one line at a time.

We are drawing a bowl of plums and I’m trying to get him to slow down. I’m asking him not to panic if what he gets on the page doesn’t seem to relate to what he sees. Start again. Ease up. Loosen your wrist. I tell him the best representation of a plum ever created might not bear any resemblance to any plum the artist ever saw. Just look at them and think about their plum-ness, the essence of the plum as a physical plum in your space, light bouncing off the plum and into your eyes, and try a few things out and see what feels plummy, gently nudge a plum into being, don’t demand it.

He raises one eyebrow at me then looks at the plums. I almost pity the poor plums sitting there in the bowl with no defences against our joint scrutiny.

I start the game:

Once upon a time there was a man called Abel Stain.

And Lanny replies without missing a beat, The Fable of Abel Stain.

Is that your line or are you just chipping in with it?

Sorry, he says. That’s what we can call it. It’s a good title.

Me: This is The Fable of Abel Stain. Once upon a time there was a man called Abel Stain.

Lanny: He had three daughters and they were all really pretty.

Me: But horrible. Two of them were horrible, one of them was nice.

Lanny: The nice one was called Barbara.

Sorry, sorry, Lanny. Took me by surprise that’s all. I did not expect her to be called Barbara. Hang on I’m getting a beer.

I go to the larder and open a bottle of stout. I come back and Lanny has got his hair all swept over his face and he’s puffing on his pencil like it’s a Gauloise in a holder and he says,

Halloo, my name’s Barbara and I am much nicer than my ’orrible sisters.

I guffawspit beer all over the nice outlines of plums I’ve drawn.

Taffy Brodesser-Akner writing about The Rules is a gift we don't deserve. 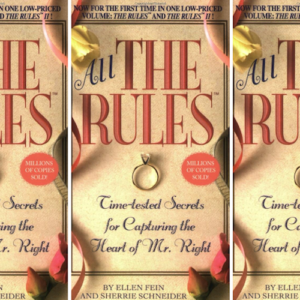