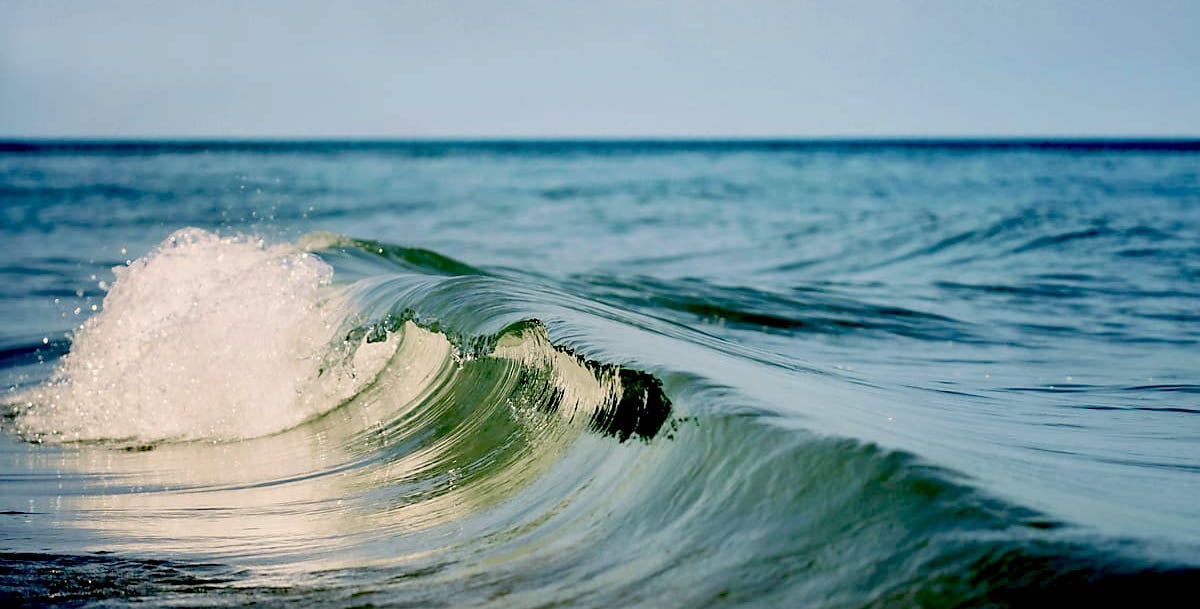 This lake believes it is the ocean. It speaks the same language—a tongue like wind, the only word an unceasing sibilance. Ring-billed gulls search for arthropods and fish, wings bent earthward at the wrists like paper airplanes made by smart boys. Their calls split the air, which smells cleanly of decay, brackish without the salt. Low, whitecapped waves of varying lengths in multiple rows strike shore like strings of Morse code.

It isn’t only the water that is unreadable. The sky scours the land for some kind of text, but the beach is covered in a sheet of sun-bleached Cladophora, algae woven by waves into one giant page. All it gives is confirmation of the rules in a childhood game: Paper covers rock, it says.

This is Lake Michigan. A crowded cedar forest, bark the color of kiwi skin shredding in long strips, opens to white dolomite bluffs. The only garbage, deflated party balloons— their once-bold foil colors now weather-muted—dot the cliff bottom. Happy Anniversary! they say to some distant individual. A chair that seems to have made its own self—legs, seat, arms, and back composed of the same angular white stones as the bluff—secures the shore.

I descend the accidental steps from our campsite, here at Wisconsin’s Rock Island State Park, following my husband. Like a single animal we track along the shore; I, the hind legs, place my boots in exactly the spot his foot has just risen from. Suddenly it seems as if the mud-brown strap of his sandal has jumped off and is slithering toward the water. “Snake!” I yell. For a moment, mid-step, he straddles the animal, which has spun around to face us. Then with a high arc he safely rejoins his feet and turns to observe.

The snake is a northern water snake, not an unusual inhabitant for a lake but a stranger to the ocean. Yet even the snake seems to be part of the ruse. His brown banding is barely visible, as if he is trying to camouflage himself within himself. He has curled into the infinity symbol. I want to believe what the snake says, that this water goes on forever, but I have learned to see the snake as a warning.

I was not born of the ocean. The sea was more great-aunt than mother.

The first time I camped along a Great Lakes shoreline was in Michigan’s Upper Peninsula. From sandstone cliffs I stared down 200 feet at water the green of oxidized copper. Lake-bottom stones, their size diminished by distance, stared back at me through the deeply transparent water like coins in a shopping-mall fountain. Water spilled through narrow nooks in the cliff tops and fell in powerful, gradually widening streams directly into Lake Superior as in the introduction to the 1980s TV show Fantasy Island.

When I sent pictures and wrote about the trip to friends and family, I mistakenly called the place “Pictured Rocks National Seashore.” Where is this seashore? my friends asked. Oops— lakeshore, I retyped. I couldn’t help feeling like it was a downgrade. But more than that, I was surprised at the ease with which I, an east coaster, had made the error.

What would it be like to meet this lake on its own terms, having traveled no more than to and from its own shores—oceans, at best, a distant mythos? I wish to be indigenous to every place I visit, to see it as Earth entire. How nice it would be to shed the compulsion to compare one landscape to another, to analyze, evaluate. To simply hear what the land says. To no longer have to choose or love or hate, to let down my guard and feel the power of the sea in this Great Lake.

I was not born of the ocean. The sea was more great-aunt than mother. Her strange manners—the continuous roar of her voice, how she would grab hold and pull me wherever she was going—always left me a little afraid. But during my yearly visits, I would come to love her eccentric ways: her salty smell, how light she made me feel when I was carried.

As soon as we crossed the Chesapeake Bay on the three-hour drive to Ocean City, Maryland, from my family’s central Maryland home, I felt the land change. From the car window it appeared dismally at. Only good for a bike ride, I thought. But when we reached our destination, I couldn’t deny the power of the coast: the seeming bedside of the living Earth.

At first, I played with the toys she scattered there—a clean, ancient soil, the smooth pieces of her inhabitants’ homes. I was not sure what to think of her beckoning. Then, as I grew, I swam out beyond the breakers, and in a sort of reverse birth dove through the swells, feeling the rise and fall of her chest above me.

Post-snake, my husband and I explore Lake Michigan’s shoreline further. I am unable to shake our discovery, surprised—stupidly, I quickly decide—to have stumbled upon a northern water snake in a Great Lake. I see such snakes all the time in the smaller lakes sprinkled across Wisconsin.

There is still something faintly brackish about this Great Lake’s air, and later, at home, I search for the logic behind my confusion.

But here, unable to see this lake’s opposite shore, beneath the gulls and with waves crashing in my ears, a horseshoe crab seems more appropriate. This is not saltwater, I remind myself. This is not ocean. The salt in Earth’s oceans comes from volcanoes and hydrothermal vents, both ancient and active. It also comes from rain, rivers, and streams dissolving the sodium chloride in Earth’s rocks and carrying it to the sea, where the average stay of a water molecule is hundreds to thousands of years, long enough for plenty of salt to accumulate as the water molecules that carried it there evaporate.

Oddly enough, Earth’s saltiest bodies of water are in fact lakes: Don Juan Pond in Antarctica is 12 times saltier than the ocean; Lake Assal in Djibouti is ten times saltier; and Utah’s Great Salt Lake can be up to 7.7 times saltier. These lakes, though, like the oceans but unlike most other lakes, have no outflow. In the Great Lakes, a water molecule and its salts do not stay put for long—only about 200 years— before traveling from lake to lake and then through the St. Lawrence Seaway to the Atlantic.

Nonetheless, there is still something faintly brackish about this Great Lake’s air, and later, at home, I search for the logic behind my confusion. I chalk it up to the Cladophora, a normally translucent green, lamentous algae native to both marine and freshwater environments, ripped here by waves from its underwater home, churned into a mash deposited on shore, and combined with the exoskeletons of tiny crustaceans and the excrement of gulls.

The shape of all this, I conclude—the same algae and gull poop, sand fleas and crabs swapped with crayfish and freshwater shrimp—must enter my nose and attach to the exact receptors as those molecules of sea air did so many years ago, a sort of skeleton key of odor, unlocking (salt or no salt) my brain’s door to the ocean.

I laugh at what I am doing. I am unable or unwilling to submit to this lake’s elemental power without proof of why it reminds me of an ocean. Regardless of how I may feel, I want empirical evidence. There is a caution I cannot shake, a fear that perhaps I am being tricked, a notion that the lake’s power may be an illusion. Like a woman jilted at too young an age who will, for a split second, see her first lover’s face on every male she encounters for the rest of her life, I have lost an innocence, an impressionability, I cannot reclaim. I fear that I will never be able to objectively see or properly love this lake. 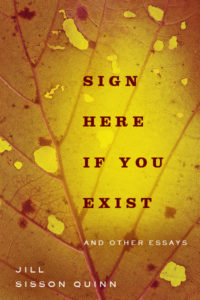 From Sign Here if You Exist. Used with the permission of the publisher, Mad Creek, an imprint of the Ohio State University Press. Copyright © 2020 by Jill Sisson Quinn.

Jill Sisson Quinn is the author of Deranged: Finding a Sense of Place in the Landscapeand in the Lifespan and Sign Here if You Exist. Her essays have appeared in Orion, Natural History, Magazine and have been selected for Best American Science and Nature Writing 2011 and Best American Essays 2016. She has received numerous awards, including the Annie Dillard Award for Creative Nonfiction, a John Burroughs Nature Essay Award, and a Rona Jaffe ward.

The 13 Best Book Covers
of August 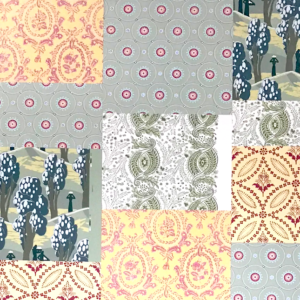 The other day, I moved into a new apartment. I went to buy myself flowers to put on the dining room table. While I was buying...
© LitHub
Back to top
Loading Comments...