Katie Runde on Trusting the Reader Will Extrapolate

In this episode, Mitzi talks to Katie Runde about her new novel, The Shore.

Mitzi Rapkin: You have one character, Brian, in The Shore who is kind of absent, because he’s not cognitively with it because he has a brain tumor, which doesn’t mean he’s not in the novel but his consciousness is different. The reader sees Brian making an insult, or saying inappropriate things, or not wanting to get in the car, or not wearing pants. But we don’t get a sense of who this this person is. So, you’re writing a book all around a ghost so I’m wondering if you thought about that, and how you approached it?

Katie Runde: Yeah, it’s the central question writing any character who’s not themselves in the present action. I became a little bit obsessed with books that do this in all different kinds of ways. I read a lot of books about characters with dementia. I read a lot of addiction memoirs, particularly addiction memoirs from the point of view of the family members. And it’s always such a hard question.

So, I think in The Shore the way I approached it is less is more, and that you trust the reader to take the cues from what you can give them from things like characters’ memories but the briefer the better and to allow the reader to extrapolate the rest of what this person was like, whether it’s one day that a kid remembers from a cross-country meet, or a particular decision that they made.  There’s this section where Evie, the daughter, is asking about a class and pushing back on Brian.

And he makes her take this economics class that she ends up loving. It’s a small moment, but I think you can extrapolate a lot from it. And then using other alternate forms, I think is a really interesting way to get to know a character who’s not himself in the present action. So, we get to know Brian and Margot’s early relationship through these emails in these web 1.0 kind of emails from the very early days of email. And every person I’ve talked to about early emails in the 90s wishes they had them.

I haven’t found one person yet who has saved those really early emails that they exchanged, whether they were silly ones with your high school friends, if you went away to college, or something like this with a long-distance person you’re dating. I haven’t found one person who still had them because your space was so small for them, and you had to delete things so much more often. Another way you can get to know characters when you don’t see them as themselves are things like flashbacks. I think it’s much better to get a little glimpse into who he was then than to spend like 100 pages to explain who he was.

Katie Runde is originally from the Jersey Shore, where her family ran boardwalk businesses. She has lived in Southern California, New York City, and Puerto Rico, and now lives in Iowa City with her husband and two daughters. She holds an MFA from the Warren Wilson MFA Program for Writers and attended the Tin House Summer Workshop. Her first novel is called The Shore.

Why the Left Needs Organized Labor

“Get Big Fast.” How Amazon Accelerated the Commodification of Literature 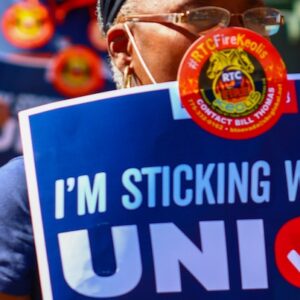 Why the Left Needs Organized Labor

To fight and win, the new left needs more than moral outrage, passionate candidates, and record-breaking protests: it needs...
© LitHub
Back to top