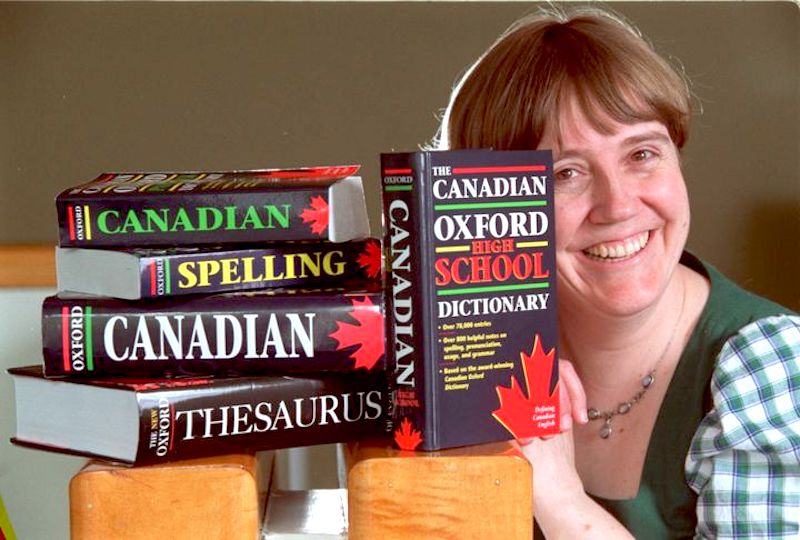 Katherine Barber, who helped define “Canadian English,” has died at 61.

You never quite realize what’s special about where you grew up until you’ve been away for awhile: it has taken me 20 years—as a Canadian living abroad—to appreciate the degree to which there is, in fact, a very particular and colorful homegrown language that exists north of the border.

So I very much appreciate the first sentence of this New York Times’ obituary of Katherine Barber, who almost singlehandedly worked to create the first comprehensive Oxford Canadian Dictionary:

In Canada, it’s possible to find a man lounging on a chesterfield in his rented bachelor wearing only his gotchies while fortifying his Molson muscle with a jambuster washed down with slugs from a stubby.

The only thing I didn’t understand was “jambuster.” But then I read on to learn that “jambuster” is a term used largely in Manitoba and northwestern Ontario (which I will now use religiously whenever I am confronted with a jelly donut). However, there’s also mention of a “steamie” (a steamed hotdog in Quebec), about which I must take issue: even if you’re anglophone, if you want a hot dog in Montreal you ask for a “steamé.”

But these two examples get at the difficulty and importance of Barber’s work: language is never really “national,” but rather a set of regional, localized vocabularies, a rich collection of interlacing argots that give color and specificity to life, which, after all, is always local.

In honor of Katherine Barber—her life and her work—I will pour out a few splashes of 50 from a stubby later today.