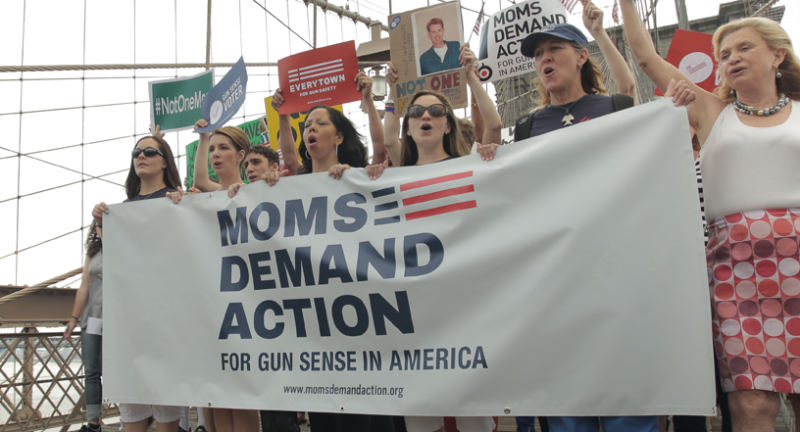 I wonder how many memories start with a date. Certainly for me, the days my children were born, the day I was married, my birthday, my siblings’ birthdays, my parents’, the day my mother died—these dates are indelible. But the ordinary days become indelible only in retrospect, in the recalling of the events of the day over and over, in the retelling of the story of what you felt and of how that day changed you.

On December 14, 2012, I was working in New York City. My job is erratic and takes me many places, and the effort it has taken to combine my family life with my working life (as it is for most parents) has been enormous. So that day in 2012, I was luxuriating in the privilege of a set job in Queens. I had reasonable hours, great pay, and a very short commute from my home in Manhattan. I was home for dinner every night. It was a dream job.

My kids were in the same school, but in different divisions—my 15-year-old son was in the upper school, and my 10-year-old daughter was in middle school. Their vacations were slightly different, so my daughter, Liv, had just started her holiday break, while my son, Cal, was still in class. My husband, Bart, was working that day as well. I had a light day on the set and wasn’t scheduled to work until the afternoon, so I thought I would bring Liv to work with me and she could watch the few scenes I was shooting and then we would return home together. Once again, I thought how lucky I was that I had a job flexible and generous enough to allow me to bring my child to work.

Early that day, the news broke about the Sandy Hook Elementary School shooting. I felt shock, and disbelief, and horror. How could this happen? How could tiny children be shot in the safety of their own school? What could be done for those families, how will they go on? And then—how will I explain this to my own children?

Attempting to shield a child from terrible news does nothing to prevent them, or any other child in the United States, from experiencing gun violence.

Liv was going to be with me all day, and so I felt I could control the narrative and decided we would discuss this as a family, when we were all together at the end of the day. Her father and I could tell our children about the tragedy, and assure them that they were safe. But until then, I would keep the news away from her.

When the van came to get us for work, I whispered to the driver to please keep the radio off. In hair and makeup, I asked them to please turn off the TV, and I asked the other actors and crew members to please not mention anything in front of my daughter. Everyone was very shaken up by the news, and we all had difficulty concentrating that day, but everyone wanted to protect the little girl who happened to be visiting our set.

We returned home in the early evening and had time before dinner, so I put on holiday music, opened the dusty boxes of Christmas ornaments, and began decorating the tree. Liv helped for a little while but then became distracted by her newly acquired smartphone, which, I am loathe to admit, we had just given her. At that moment, she looked up from her very carefully monitored phone, with its selected numbers of grandparents, mom, dad, brother, and friends, and said, “Mommy, did a bunch of little kids get shot today?”

I was so ashamed. That was the moment I realized that I had failed as a mother. I wasn’t keeping her safe. Attempting to shield a child from terrible news does nothing to prevent them, or any other child in the United States, from experiencing gun violence. Only by doing something about gun violence was I going to be the responsible parent and citizen I wanted to be.

Traditionally, actors have been reluctant to talk about guns, because of the relationship in our culture between guns and entertainment.

So I began speaking out. Traditionally, actors have been reluctant to talk about guns, because of the relationship in our culture between guns and entertainment. But one of the things that I learned was that the entire world consumes the exact same video games and movies, and we are the only developed country in the world that has this level of gun violence.

I noticed that Michael Bloomberg had started an organization called Mayors Against Illegal Guns, and I sent money to it. I began speaking out in interviews. I read as much as I could about gun violence, and I started following people on Twitter who were speaking out about this epidemic. One of them was a woman named Shannon Watts.

Shannon Watts had a similar experience to mine on the day of the Sandy Hook shooting. Her sense of outrage led her to start a Facebook page initially titled One Million Moms for Gun Control. Within moments of her creation, incensed moms across the country joined her, and Shannon understood that she had tapped into a “tsunami of rage” among American moms. Just like that, Shannon Watts became a mother of the movement.

I didn’t get to meet Shannon for another two years. By then, I had tired of the blowback I received when speaking out against gun violence and realized I needed to do more than send money and tweet. I had been avidly following Shannon and realized that her organization, now titled Moms Demand Action for Gun Sense in America, had partnered with Mike Bloomberg’s group, now called Everytown for Gun Safety. Inspired by what they had done, I went to them and offered to create a nonpartisan council of people from my community (known for their very big mouths) who were willing to lend their loud voices to the gun safety movement. And so I founded the Creative Council at Everytown—our initial group consisted of everybody on my contact list who would answer my email. I was modeling my behavior on Shannon, who by this point had become my own personal hero.

When I did meet Shannon in person, she did not disappoint. She was exactly as she had been described to me—a mom of five, modest, a full-time volunteer who worked around the clock to change culture and legislation. She is an empath, an introvert, a quiet warrior, and a leader whose mission statement never fails to both make me cry and galvanize my activism—“If we have lost our children, we have nothing left to lose.” In her wonderful book, Shannon explains what it is to be an activist and how all of us have the ability and the bandwidth to do more than we think is possible. She explains that moms have a unique toolkit of assets, and the very skill sets we use to manage our family lives are the ones that make us uniquely powerful activists.

Moms Demand Action has grown from a Facebook page to our nation’s “first and largest grassroots counterweight to the gun lobby.” I am proud to be among the now thousands of volunteers, along with my now teenage daughter, working to change the culture of gun violence in the United States. And I am very proud to know Shannon Watts. 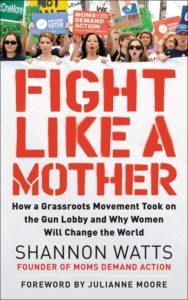 Excerpted from Fight Like a Mother by Shannon Watts. Reprinted with permission from HarperOne, an imprint of HarperCollins Publishers. Copyright 2019.

Julianne Moore is an American actress and author of the Freckleface Strawberry children's book series. The recipient of many accolades, including an Academy Award and two Golden Globes, Time magazine named her one of the 100 most influential people in the world in 2015. Her film and television appearances include As the World Turns, Still Alice, Boogie Nights, The End of the Affair, Far from Heaven, and The Hours. 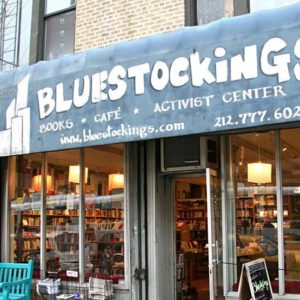 Located in Manhattan's Lower East Side, Bluestockings is a collectively owned and operated bookstore with a long history. * What's...
© LitHub
Back to top
Loading Comments...