Getting Tipsy with the Author of Conviction

I met Julia Dahl in the bar on the same block as her apartment in Gowanus, where it’s blissfully cozy and quiet on a winter weeknight. As we get down to drinking and talking about her new book, the outstanding Conviction, Dahl chatted happily about how much she loves the neighborhood and sees it as an extension of the apartment she shares with her husband and toddler-aged son. She’s at ease talking about the book, too, both excited to hear feedback about it and eager to share some of the research that went into writing it. She’s even willing to spill details of the next Rebekah Roberts book, which features—gasp!—no Jews.

With multiple timelines and plots, Conviction is much more complicated than either of Dahl’s previous Rebekah Roberts books, Invisible City and Run You Down, both of which feature young reporter Roberts reuniting with her estranged mother, who left a strict religious Jewish sect to give birth to her with her gentile father, while getting involved with crimes in the Hasidic community. When I asked Dahl if she had to go back to the earlier books and look anything up or develop any new organizational schemes for Conviction she said, “I’ve had to do that on certain things, like what year people were born or how I described this person.”

“You mean you don’t have a big murder board at your house?” I asked her.

“Thousands of fans everywhere are now taking down their Julia Dahl posters,” I told her with a sigh.

From the murder board joke we did end up discussing how Dahl uses Scrivener, the cultish software program with a built-in index card feature popular with all types of writers (I’m a fan as well).

What was more complex for Dahl was the coincidence of the birth of her son with the genesis of Conviction. Dahl had decided to raise the stakes and branch out into other point-of-view characters besides Roberts. “I’m going to do this because I can’t keep writing the same book. I love Rebekah, but I’m interested in other people. Actually, the first 100 pages I gave my agent, she was like, “It’s good. You know, it’s great, but you need some more…” What did she say? Something like more stakes. “The stakes need to be higher for Rebekah.” She’s like, ‘You can tell that you’re more interested in these other people than you are in Rebekah.’ That stalled me. She said that to me right before I gave birth.”

Dahl continued, “Basically I stopped writing for three months after she gave me that [note]. Partly because I stopped writing for a month and then I gave birth a month early and then I didn’t write for a couple months. Even though it was very stressful because I remember thinking, “Oh my God. Oh my God. I’m not gonna finish this book. What am I gonna to do?” But once I took a few months away from it, it sort of brought me back to understanding. It just allowed me to see it and be like, ‘All right, there are a lot of things that I can do here. I can make it work,’ and to be simply more interested in how Rebekah’s actually involved in all this.”

Dahl’s solution is an elegant one: her series character, Roberts, is a reporter, and she gets involved with an African-American man who claims he was wrongly convicted of the murder of his foster family during the summer of tension between religious Jews and African-Americans in Crown Heights in 1992. Dahl tells the story of the murder from several points of view, as well as following Rebekah and others involved in the story then and in the present. Slight spoiler: one of the most interesting characters is Chabad strongman Joe, who throws off an upper-middle-class upbringing in Los Angeles to live an ascetic life in Crown Heights, providing muscle for a slumlord. I said to Dahl, “I wanted to ask you about radicalization. Once I started thinking about it this afternoon I was thinking that in some ways it’s really amazing that we have not seen mass radicalization in Brooklyn.”

Dahl said, “With a book like Conviction, one of the things that I fought in writing about this community and have always fought and have always wanted to explore is how fundamentalism, whether it’s Jewish, Mormon, Christian, it’s so similar across religions. In any faith, whether it’s a book or a set of teachings or in some man. In a way I think religion’s in your own responsibility in how you live and how you make decisions that are either your own morals or your parents.’” Dahl has chronicled a lot of radicals in the Roberts books, but that’s coming to an end.

Of the new book, Dahl says, “It’s a Hasidic-free zone. I’ve been thinking about that a while. I started writing about the Hasidics and Hasidim because I was really interested in it because all these sort of strange things had happened where I moved into an apartment where the guy had committed suicide and he was Hasidic. Then a couple times when I was at the Post I got sent on these weird Hasidic stories and I just became really interested. But that was ten years ago. And I believe strongly that if you’re not interested in your book, nobody else is going to be interested in your book and I want to write about other kinds of people. And it becomes very hard to constantly write about this group of people that I am not a part of. I don’t want to be the expert on Hasidim.” It will still feature Rebekah, but it will center on a rich student who’s gone missing from a university much like NYU (where she is presently doing research courtesy of a friend who is an RA). Dahl says, “It’s like, ‘I’m a reporter, I’m a writer, because I’m just basically nosing around.’ My job is that I get to ask you a bunch of questions that maybe they’re inappropriate, but it’s my job.”

“It actually is amazing that people answer them.” I think we might be tipsy.

“Yeah. I’m like this and maybe you are too. I think a lot of us don’t have people that are that interested in us, so when some person from a newspaper or whatever asks you a question about your life and thinks it’s interesting, that’s flattering,” Dahl said.

“I think that’s true. The reflex for inappropriate doesn’t kick in fast enough,” I said.

“Yeah. We all do this because we’re curious about people. That’s why you read and if you’re lucky enough, that’s why you write. One of the things that’s been fun is that with each book I end up in order to do the research necessary to make the worlds that I’m creating feel legit because I’m not writing about my world … Because mine is boring as shit. I have a boring life. Why would I write about my life?” Dahl said.

“Most people have boring lives.” I said, and notice my drink is empty.

Julio Cortázar Teaches a Class on His Own Short Story 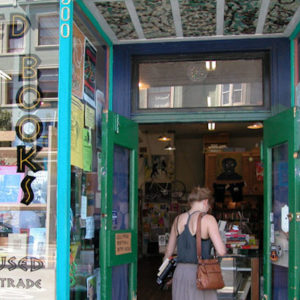 I was recently in San Francisco's Mission District with an hour to kill. In general I hate having to kill time—I never...
© LitHub
Back to top