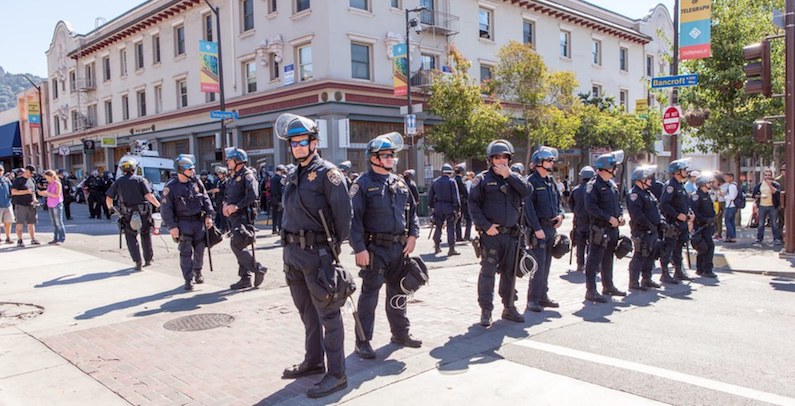 Journalists are being prosecuted for covering the Black Lives Matter protests.

Today, jurors begin deliberations in the trial of Des Moines Register reporter Andrea Sahouri, who has pleaded not guilty to two misdemeanor charges—failure to disperse and interference with official acts—with which she was charged while reporting on a protest on May 31. Officer Luke Wilson of Des Moines Police Department sprayed Sahouri twice in the face with pepper spray; Sahouri was then handcuffed using zip ties and taken to Polk County Jail, where she was charged.

Sahouri has testified that she saw Wilson charging at her and put her hands up and identified herself loudly as a member of the press; as he grabbed and pepper sprayed her, she testified, Wilson said, “That’s not what I asked.” When questioned, Wilson said Sahouri never identified herself as a reporter. Wilson had been wearing a body camera, but police say the footage was deleted. Wilson testified that he didn’t press a button on the camera that would have saved the footage. Another officer’s body camera recorded Sahouri after her arrest repeating that she was with the Des Moines Register.

Sahouri’s case is representative of the sharp upward spike in arresting and detaining journalists last year; according to the US Press Freedom Tracker, 128 journalists were arrested or detained in 2020, compared to 2019, which saw only nine. The spike correlates with the uptick in racial justice protests in 2020. It’s pretty damning data: Kristin McCudden, managing editor of the Press Freedom Tracker, told USA Today that the tracker’s data shows that last year “journalists were targeted with assault and arrest by law enforcement across the nation.”

“The charges against Andrea Sahouri represent a clear violation of press freedom and fit a disturbing pattern of abuses against journalists by police in the USA,” said Erika Guevara-Rosas, Americas director at Amnesty International, in a statement. “Treating media work as a crime is a human rights violation. US officials must uphold freedom of expression and immediately dismiss the charges against Andrea Sahouri.”