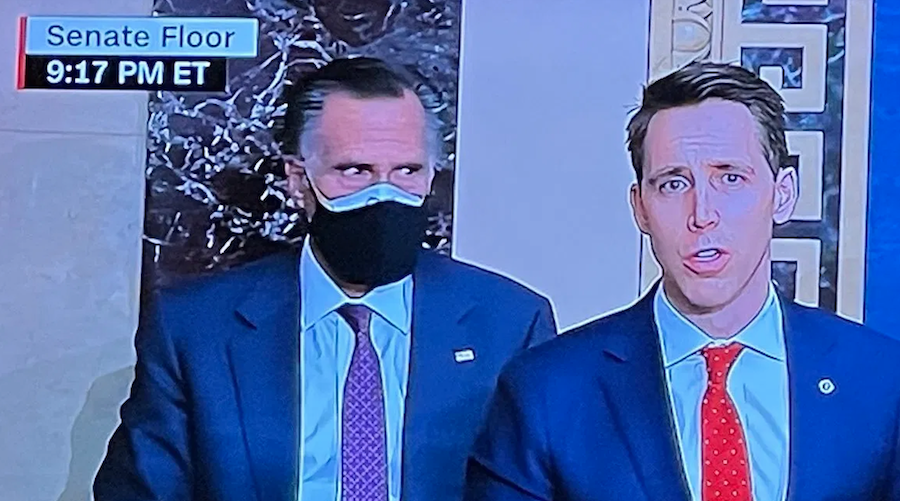 Josh Hawley, after inciting a violent, bloody insurrection, has his book canceled.

By now you’ve all probably seen Senator Josh Hawley—the heir apparent to Donald Trump’s dogwhistling, populist demagoguery—getting widely trounced on Twitter for not quite knowing what “Orwellian” means. But, to recap:

· Wednesday around noon, Josh Hawley, after inciting for weeks direct interference with American democracy, pumps his fist like just another Brooks Brothers Braveheart in support of a be-furred and moronic troupe of white nationalist assholes on their way to vandalize the Capitol and, it appears, take hostages of elected representatives.

· Wednesday afternoon, book twitter reminds us all that Hawley has a book (about the tyranny of big tech? FREEDOOOOOOM!) scheduled to come out with Simon & Schuster.

· Late Wednesday night, Hawley, after narrowly escaping Mitt Romney’s Mormon curse (see above), doubles down on the very same toxic rhetoric that led to bloodshed in the halls of the Capitol.

· Thursday, S&S surprises many by canceling Hawley’s contract, saying “we take seriously our larger public responsibility as citizens, and cannot support Senator Hawley after his role in what became a dangerous threat.”

· Thursday late afternoon, Hawley responds on Twitter, citing the “woke mob” (yes, a figurative mob), claiming that “the Left is looking to cancel everyone they don’t approve of” and that he’ll be fighting “this cancel culture with everything I have.” Also, that “this is about as Orwellian as it gets.” Sure, guy.

· Thursday evening, a thousand twitter accounts explain that the First Amendment doesn’t guarantee anyone a book contract (but, like, Merrick babe, maybe it should?).

· Orwell spins once again in his cold, dank grave.