"The Close Work" was Joyful Work

When I was 20, a housemate handed me a copy of Jim Harrison’s first novel, Wolf: A False Memoir, and my reading life was changed forever. I began to read everything I could find by Jim Harrison, and became especially interested in his poetry. This was pre-internet, so finding the poetry titles took some effort. When my girlfriend and I decided to get married, I told her that she needed to know one thing: If ever I found a copy of Letters to Yesenin in hardback I would be buying it, and it would likely cost more than a month’s rent. (That prediction proved to be true.) Then in 1990 I heard that Harrison was scheduled to give a reading in Seattle, and I came upon a bright idea: Interview the man. I called Harrison’s publisher and smoke-and-mirrored my way to an hour time-slot. I then went about and re-read the entire Harrison oeuvre in preparation.

At the reading, Harrison charmed the hundreds of people crammed into the basement at Elliott Bay Book Company, one of Jim’s favorite bookstores. After the Q&A, and a quick smoke for Jim, I stood in a long line to get my books signed. When my turn came, I presented his first three books of poems. “Where did you get these?” he said. “I’ve been reading your poetry for a long time,” I said, “and I’m happy to be meeting tomorrow for an interview.” He looked up and said, “Are you Bednarik? That was supposed to be today. We were wondering where you were.” (This was also before everyone carried cell phones.) I was stunned. There were long seconds of agonizing silence, then Jim asked his assistant whether there was any free-time for us to meet before his flight the next day. There was, and he agreed to meet the following morning for the interview.

We walked around Seattle, talking poetry and literature, and an hour turned into two and then he invited me to stick around until his ride showed up. From there we began a correspondence, did two more literary interviews, and then Jim hired me to “do the close work” on the manuscript for his collected poems. “The close work” meant typing all the poems he had ever published into a word processor, as he only had hard copies. This, for me, was joyful work. And while I was at it, I compared all the published versions of his poems, found variants and errors and even discovered some all-but-forgotten poems in tiny literary magazines. This teeming manuscript would eventually become the incandescent Shape of the Journey: New and Collected Poems, published by Copper Canyon in 1998. In a beautiful stroke of luck, that same year I was hired by Copper Canyon, and over the past eighteen years have had the great good fortune of working closely with Jim on all of his Copper Canyon books. Again, joyful work!

It was Easter morning when I learned that Jim died. Instinctively I reached for Dead Man’s Float, the last book we worked together on. The first poem, entitled “Where is Jim Harrison?,” contains the line “He believes in the Resurrection mostly/because he was never taught how not to.”

Jim Harrison is one of my dearest friends and deepest teachers. I love him very much—yes, present tense—and will be reading his poetry until I can no longer read. 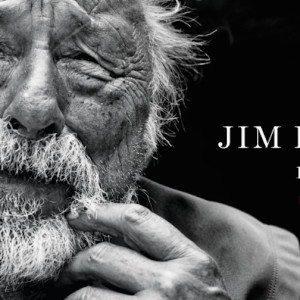 Jim Harrison—writer, poet, storyteller—died last Saturday, March 26th, at the age of 78. He is remembered here by his friends...
© LitHub
Back to top